Married and with two sons

GoChi is the het ship between Son Goku and Chi-Chi from the Dragon Ball fandom.

Chi-Chi had a crush on Goku almost as soon as she met him when they were children but Goku was oblivious to this. Goku accidentally promises to marry Chi-Chi without understanding what a bride is. Chi-Chi is very happy when he makes the promise.

They meet later as teenagers during the 23rd World Martial Arts Tournament and Chi-Chi is angered that Goku doesn't remember her. After Goku defeats her in their match she reminds Goku of their promise and Goku proposes to her.

Later, they get married and Chi-Chi gave birth their first son, Gohan, and later she gave birth their second son, Goten. Their relationship is often strained by Chi-Chi's disagreements over Goku's life style and on how to raise Gohan. She they shown to still care for each-other like how Chi-Chi is upset over the times when Goku was killed and in Dragonball Super Goku is angered when he learns that Zamasu killed Chi-Chi in an alternate time-line.

Goku and Chichi remain a popular pairing among Dragon Ball fans due to their odd relationship providing amusing moments between the two. The fact that they are canon has helped the pair garner support as well. Their rival ship is GoBul.

There are many fans who do not like Goku and Chichi, as the pair got together very early on before the fans had a chance to explore their relationship. On top of this, their relationship is generally believed to be poor, due to Goku rarely being around, and Chichi excessively nagging him all the time. Chichi has also been criticised for, occasionally, not showing to care for Goku's well-being. 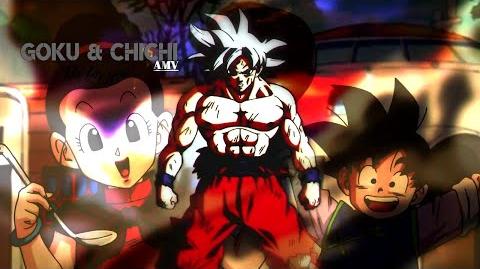 DIE FOR YOU「AMV」▪ GOKU AND CHICHI ▪
Retrieved from "https://shipping.fandom.com/wiki/GoChi?oldid=220383"
Community content is available under CC-BY-SA unless otherwise noted.