Gohiru is the het ship between Mahiru Koirumi and Gonta Gokuhara from the Danganronpa fandom.

The two have never interacted in canon, since they are from two separate Danganronpa games. Mahiru being from Super Danganronpa 2: Goodbye Despair and Gonta from Danganronpa V3: Killing Harmony. Although they never met in the official games, the two shared a friendship event in the board mini-game Ultimate Talent Development Plan featured in the Killing Harmony bonus material that is available after finishing the game.

Gonta is searching for “OOPArts” for Yasuhiro, as he said there might be something “around the academy”. Mahiru tries to convince Gonta that he should stop searching as Gonta “shouldn't take anything Hiro says seriously”. Mahiru noticed that Kokichi also seemed to lie to Gonta recently and mentioned that Gonta is a lot softer than he looks. Mahiru tells Gonta to "get his act together". Gonta replies that he won't become gentlemen if he doesn’t do so.

Her response to that is that Gonta is too nice but that's better than “being a jerk like most boys”. At the end she supports his goal and wants him to set a good example for the other boys and Gonta will try to work hard on it.

For example, Mahiru wants to help as many people as she can. As for Gonta, he is very protective of his friends and promises to defend them from any harm. Mahiru is introduced as hating people who lack manners and also has high expectations of men, which she is often harsh towards.

Though for Gonta, as he is certain to become a gentleman, he tries his best to have good manners, for example, he listens to other people a lot. Gonta seemingly wishes to have a motherly figure to take care of him. That is shown in the dialogue where Kokichi asks Kirumi to be his mom and Gonta asked the same. In fact, you can say that Mahiru is a similar motherly figure as she is a reliable person who thinks of the people close to her and is willing to take care of people.

Gohiru is a cross-game rare pair in the fandom. It's not very popular due being a cross game ship between characters with already very popular ships. Examples would be Soapies for Mahiru or Gontaguuji for Gonta. As for June 2021, The ship only got 2 fan fictions on AO3 [combined with other couples] and 30 posts on Instagram with the Gokuzumi hashtag. Those numbers reflect the small fanbase of this ship very well.

The ship sailed due to the caring nature of both characters. Gonta differs from most males that Mahiru has met due to being kinder and focused on being a gentleman, something that Mahiru comes to expect from men. Meanwhile, Mahiru's agreement to support Gonta in his goal of becoming a gentleman is a form of care from her character.

Fans could see Gonta changing Mahiru's view on men, as she perceives him as a good example for most men. Mahiru could also help Gonta towards his goal of becoming a gentleman. Additionally, the idea of a photographer helping out an entomologist by taking photos of bugs would make for a cute possible interaction in fanon.

Mahiru – “I support your goal of becoming a gentleman. Set a good example for the other boys, okay?”
Mahiru – “Geez, you're actually a lot softer than you look, huh?”
Mahiru – “Well, maybe you're just nice to a fault... But that's better than being a jerk like most boys.” 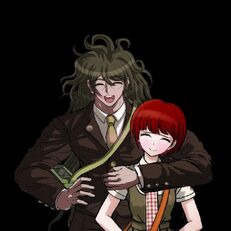