• Opposites Attract
• Like an Old Married Couple — Utahime and Gojo bicker constantly, it mostly starts off with Gojo teasing Utahime as that makes her frustrated at him.
• Hair Contrast Duo
• Headbutting Heroes
• One Head Taller
• Sugar and Ice Personality

GojoHime is the het ship between Satoru Gojo and Utahime Iori from the Jujutsu Kaisen fandom.

Gojo and Utahime are teachers at Tokyo Jujutsu Tech and Kyoto Jujutsu Tech respectively. They've known each for over 10 years, presumably since Gojo's second year, with Utahime being 3 years older.

Gojo is often seen teasing Utahime, eventually getting on her nerves. Due to their relationship, Utahime is quite used to his teasing and even though she gets agitated, they manage to get along when in action. In Episode 14, once Utahime and the Kyoto students arrive for the Sister School Goodwill Event, she asks everyone where 'the idiot' is, in reference to Gojo. As soon as this is said, he appears, to which Utahime reacts with "Tsk. Gojo Satoru", with a rather disapproving look on her face. He's seen rolling a metal box along with souvenirs for the Kyoto students from his overseas business trip, but notes that none are for Utahime, clearly teasing her. She responds with annoyance, claiming that she wouldn't need one anyway. While Principal Yaga is explaining the event, he is holding down Gojo and Utahime can be seen laughing softly at him.

While Gojo is explaining to Utahime why he believes that a human is working with curses, Utahime asks him what would he do if she was the traitor to which Gojo responds that it can't be her since she's too weak and doesn't have the guts to try and betray them. In response, she throws her drink at him. Gojo then tells her that hysterics won't win men.

At the beginning of Episode 15, Gojo is counting down for the start for the start of the event, and when there's one minute left, he asks Utahime to say some words of encouragement. Since Utahime wasn't ready, she struggles to say something, and stutters. Gojo cuts her off after she musters something by saying "time's up!", making her angry. She continues to shout at Gojo for embarrassing her and tells him that he should respect his elders. In Episode 17, while Gojo and Utahime are watching the students, Utahime says that the students should just get along with each other. Gojo replies by saying "They must take after you, Utahime", but she says that Gojo is the only one that she has a problem with.

Some time later Gojo and Utahime are seen talking on the phone. Gojo briefly tells her about the first-year students, boasting about the triumphal ending of their last mission. He says their success must be the direct consequence of his "awesome teaching". Utahime interrupts him and tells him to hurry up, since it's her day off, and she doesn't want to waste her time talking to him about college life. She mentions that staff members are all busy and cannot attend "a party", meaning she didn't find the traitor among the faculty. He figuratively asks whether the mole is a student, and she says that she will keep asking around.

“At first, I went to make a character that was a quite specialized in Tsukkomi, but there was direction that she was elegant, beautiful, and only changed when Gojo involved. She often gets angry, but that's why I wished I could make a character that makes people think she's cute. It's a difficult point of view but I think that the nuance is different from hate or distaste. I feel that it is necessary to have a very delicate play as to where Utahime's feelings and how to reconcile with the places she hates to lose. There are many parts that have not been revealed yet, so I'm looking forward to playing them in the future.”
— Hikasa Yoko[1]

This ship took off during the Kyoto Sister School Goodwill Event episodes. Their main trope includes "Opposites Attract", especially due to the extreme differences between the two personalities, with Utahime being more calm and Gojo being playful.

This ship is largely popular within Japanese fans, who call them the "Five Songs Couple" (GoUta - "Five Songs", in Romaji): Go (五) from Gojo's surname, which directly translates to "Five", and Uta (歌) from Utahime, which also directly translates as "Song". GojoHime has been popular within manga fans for some time now, which explains the relatively large amount of fanfictions and fanarts of the ship. Their interactions in the anime adaptation has also welcomed new shippers to the boat.

Utahime throwing a cup at Gojo 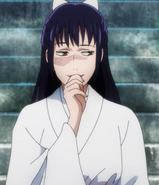 Gojo and Utahime discussing a possible traitor at Kyoto Tech

Utahime and Gojo during the exchange event

Utahime and Gojo in a Jujutsu Stroll

Gojo and Utahime in the scene explaining Black Flash 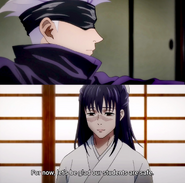 Gojo's scene switching to Utahime's as she smiles in relief 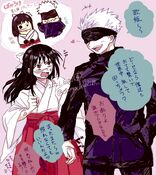 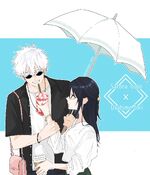 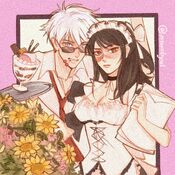 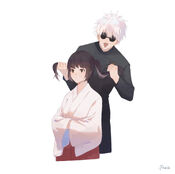