Gokumaru is the slash ship between Gonta Gokuhara and Nekomaru Nidai from the Danganronpa fandom.

Because the two come from different entries in the series, they have no canon interactions. Regardless, they do share numerous interactions with each other in Ultimate Talent Development Plan, where they are both shown to be good friends.

During one event, Gonta greets Nekomaru, and Nekomaru compliments Gonta on his body. Nekomaru then asks Gonta how much training he's done, and Gonta answers that he doesn't train, and that growing up in the forest has simply made him stronger than most. Nekomaru then says that he's trained in the mountains before, and so he can understand the hardships of living in nature. Gonta is surprised to learn that Nekomaru has also lived in nature, and comments on how great it is. Nekomaru agrees, and talks about how he climbed rock walls and showered under a waterfall, to which Gonta replies that both are a lot of fun. Nekomaru laughs and seems impressed that intense training is mere child's play to Gonta, and Gonta says he's happy, because there aren't many people he can talk to about this. Gonta then asks Nekomaru if he would like to spend some time with him again, and Nekomaru says he would, and tells Gonta that he'll come up with a training plan for him that he can even do in the city.

During the school festival, Gonta hosts his own Insect Meet and Greet exhibit. Nekomaru comes in and tells Gonta that there's something he wants to ask him, and Gonta asks what it is. Nekomaru tells him that he's been blessed with a great body, and asks if he ever tried sports. Gonta answers that he just likes to run really fast, but he has never tried any sports before. Nekomaru then says that he was gonna ask if he had any intention of becoming an athlete, but sees that he's already decided on his path, which is dedicated to caring about insects. Gonta then joyfully introduces Nekomaru to all of his bug friends.

During Nekomaru's last winter at the academy, he wants to speak to Gonta one last time while he has the chance. Gonta greets Nekomaru, and Nekomaru once again compliments Gonta on his body. Nekomaru again asks if there's any way he can convince him to try some kind of sport, and Gonta replies that sometimes he wishes he could do sports, but he has a hard time remembering the rules due to his poor intelligence. Nekomaru says that it's fine, and that he doesn't need to play sports to become a pro, and that he can simply enjoy them with his friends, or use them to polish his mind, and that he should understand that as the classmate of Tenko Chabashira. Gonta then recalls Tenko saying that she uses aikido to keep her mind sharp, and Nekomaru says even though he's trying to become a gentleman, he can cultivate that mentality through sports, as sports require a gentlemanly conduct at all times. Gonta understands Nekomaru's advice, and mentions that he has a friend who is also a rugby star. Nekomaru laughs, and says that Gonta would make a perfect rugby player, before apologizing for letting his "manager side" effect their casual conversation. Gonta doesn't mind however, and says that he's interested, and asks if Nekomaru can teach him how to play rugby, and Nekomaru accepts his request.

“Bones like castle walls, well-defined muscles... All that lovely meat on you!”
— Nekomaru admiring Gonta's physique.

“Gonta happy... Not many people Gonta can talk to about this.”
— Gonta happy to find someone he can relate to.

“Seems like I was rejected before I even asked... but since I'm here, let me see your friends.”
— Nekomaru asking to see Gonta's bugs.

“Y-Yeah! Gonta wanna teach you all about bugs!”
— Gonta eager to teach Nekomaru about insects.

Gokumaru is one of several ships that sailed as a result of the characters' interactions with each other in Ultimate Talent Development Plan. Many fans enjoyed how Nekomaru would compliment Gonta on his strength and took the opportunity to get to know him and his interests, as well as providing him advice. Fans of the ship also find the two compatible, as they are both portrayed as the archetypal "gentle giant" of their respective groups. The ship is somewhat of a popular choice for both characters, as they don't have overly many to begin with. However, the pairing does lose in popularity to ships like Akanidai on Nekomaru's side, and Gontaguuji, Goshi, and Ougoku on Gonta's side.

Chapter 4 Trio refers to the ship between Sakura Ogami, Gonta and Nekomaru 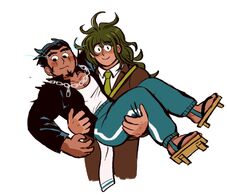