View source
watch 01:55
Cobra Kai Season 4 - The Loop
Do you like this video?
Play Sound
WOAH! THAT'S ONE SMALL SHIP!
• THIS ARTICLE IS A STUB. YOU CAN HELP BY EXPANDING IT •
Stub pages are deleted after 4 months and if not filled out enough, Golden Trio will be deleted
4/22/22

Golden Trio is the friendship between Harry Potter, Ron Weasley and Hermione Granger from the Harry Potter fandom.

The trio met for the first time on the Hogwarts Express when Hermione was looking for Neville's lost toad, Trevor. At Hogwarts, they all got sorted into Gryffindor. While Harry and Ron were already best friends at this point, they did not get along with Hermione yet.

Hermione followed Harry and Ron when they left the Gryffindor tower to duel Draco Malfoy (which, in reality, was Draco attempting to get Harry and Ron into trouble, as he never showed up). They escaped caretaker Argus Filch into the third-floor corridor, where they encountered a three-headed dog, Fluffy. They quickly ran away, and only Hermione noticed the dog was standing on a trap door.

On Halloween that year, Hermione spent the entire day crying in the girls' bathroom, unaware that a mountain troll had been let loose. When Quirrell told everyone there was a troll in the dungeons, Harry and Ron rushed into the bathroom to save Hermione. They noticed the troll there and defeated it. When the professors arrived, Hermione covered for the boys, saying she had attempted to fight a troll on her own. Since then, Hermione had been best friends with the two, making this the forming time of the trio.

The trio spent their Hogwarts years together, solving mysteries during these years, and often leading to saving the school. They had some arguments, such as when Harry and Ron didn't get along when Harry was chosen for the Triwizard Tournament, but in the end, they always made up.

The three were the founding members of Dumbledore's Army, an organization that taught how to defend against the dark arts in secret as Dolores Umbridge's lessons didn't teach them anything.

In what would have been their seventh year at Hogwarts, the three didn't attend, and instead spent the year looking for Horcruxes. 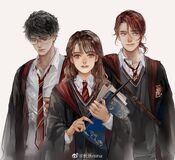