Shipping Wiki
Register
Don't have an account?
Sign In
Advertisement
in: Ships, Ships/Slash, The Owl House/Ships,
and 5 more

Goldric is the slash ship between Golden Guard and Edric Blight from The Owl House fandom.

In addition to being the same age and gender, Edric and Hunter also share certain personality traits with each other. Both Hunter and Edric have been shown to have arrogant, funny, and sometimes even annoying personalities. But while Hunter can easily get angry when someone makes fun of him, Edric is more laid back and calm, so he can rarely be seen angry. Given the status of their families, they are known as prodigies, but despite their social status, they never take advantage of their power for personal gain. Unlike the people around them, they are more humorous and sarcastic in their dialogues most times they speak.

Although most of the time they tend to act sure of themselves, secretly they suffer great pressures and insecurities about who they are, their identity and they have the desire to be useful to others. Although not sadistic, both boys have threatened to kill or injure an animal, a bat for Edric and King for Hunter, but then showed curiosity about the animal for a short period of time.[1]

Both like to read topics of their interest but they point it out as a simple hobby and that it is not something they feel proud of out of shame. They are also curious, when they discover something new that attracts or interests them, they immediately focus on it and tend to disconnect from the world around them. An example is his interests in wild magic. Despite what Belos has told him, Hunter is very interested in Palisman magic and has increasingly learned to control it. As for Edric, although initially he only practiced Illusion magic, over time he wanted to learn more about other types of magic (such as potions or Beast Keeping magic).

In the episode "Escaping Expulsion," Hunter meets Edric's parents, Odalia and Alador Blight, and tells them that Emperor Belos decided to purchase all their abominations for himself. For what remains implicit that Blight family could begin to relate or work for The Emperor's Coven. As of "Eclipse Lake" Hunter also meets Edric's younger sister Amity, though not in the best of ways.

In the episode episode "Hunting Palismen", although Edric does not appear or is mentioned in the episode, the face and more of Hunter's personality and the similarities he has with Edric are revealed. By the time Hunter's face was revealed, some fans noticed that some of his facial expressions and gestures are similar to what Edric does.[2] The similarities between the two only increased as the series progressed. They both know King to begin with, but while Edric is on friendly terms with him, Hunter is King's enemy.[3] The two also went so far as to adopt a flying animal that they have a close bond with. Edric adopted the bat he met in "Adventures in the Elements" and Huner has had Flapjack as a pet since the end of "Hunting Palismen".

In the episodes "Any Sport in a Storm" and "Reaching Out" Edric and Hunter's physical and motivational similarities only began to increase greatly.[4] To begin with, they both feel that they are not important and try to help or be helpful but people tell them that it is better not to interfere. They try to impress and prove themselves to older people who are not their family (Eda for Edric and Darius for Hunter). If they make a mistake, they feel that it is the end of the world and that they deserve punishment for not meeting the expectations of others. They expect to be punished for their mistakes, but in reality both Eda and Darius commend them for learning from their mistakes and that they need to gain more self-confidence in order to accomplish many things. They received a garment after this congratulations that makes them feel more confident and special.[5] And finally, they usually hide their true face behind a mask, (in Edric’s case it would be a spell) by order of their superiors.

In "Labyrinth Runners," Hunter is taken to the healing homeroom. Due to Hunter's worse condition, a few people make comments about Hunter. Edric is the first to make a comment about Hunter, asking, "That's the Golden Guard?" Later on, the students ask Hunter questions. Edric asks Hunter if he's ever sneezed with his mask on. Hunter answers all of the questions. Edric says it's gross when Hunter confirms he's sneezed with his mask on. Along with Hunter informing Edric and the others of the dark truths of Belos and the coming danger on the Day of Unity.

“Have you ever sneezed with your mask on?”
— Edric to Hunter

Many fans started shipping Goldric after it was revealed that Hunter was 16 years old. Some thought that Goldric could be a possibility if Edric's parents made him get involved with the Emperor's Coven. Others started shipping there were many femslash ships and wanted to pair the few boys in the show. An idea used in fanworks is that Hunter visits Blight Industries often just to see Edric. The Hunter is seen as a very dangerous threat, but some fans believe he is only a threat under Belos' commands and he would have a soft spot for Edric. Another idea used in fanworks is that Hunter signs up for Hexside as an spy for the emperor or is interested in learning different types of magic and finds himself in the same class as Edric and they become good friends.

Dana Terrace posted official art of Edric and Emira, with the caption saying they got stood up on Grom night.[6] Few people thought that the person who stood up Edric could be Hunter. Although, in the episode "Through the Looking Glass Ruins," it's mentioned that Edric had a date with someone and more people thought that this person he was on a date with could be Hunter.

This ship is mainly rivalled by Jerbric, although Goldric can also be seen as a replacement for Jerbric since Jerbo and Edric have also never met. Some fans of both ships like to ship all three boys together in a poly ship. The ship has around 223 fanworks in AO3, being the most popular ship for both Edric and Hunter, as well as the 5th most popular romantic ship in TOH and the 10th most popular ship in general. Due to the occasions when the role swap AU within the Owl House fandom has Hunter as Luz, Edric being a Blight and those who support both the Au and the Goldric ship sometimes have Edric serve as Hunter's Amity. Just as they sometimes have Edric's twin sister as Amity for when Huntmira is featured in the same AU.

Many Goldric fans were pleased when the series finally had the two meet in canon through the later events of "Labyrinth Runners." While hoping that the Disney cartoon would at lest showcase other Goldric-like moments in future episodes, as the fear of the limit number of the season three episodes and the way that season two is reaching its end, could mean that series might not showcase Hunter and Edric becoming friends on screen. As the aftermath of "Labyrinth Runners" subjects that the last upcoming S2 episodes might have a few off screen moments explained. 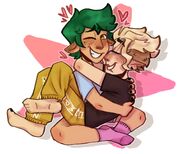 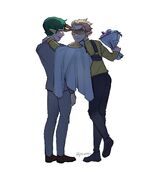