Gontaguuji is the slash ship between Gonta Gokuhara and Korekiyo Shinguji from the Danganronpa fandom.

Both characters don't share many interactions in canon. They appear to mostly have a neutral relationship, with Korekiyo showing appreciation for some of Gonta's traits, while Gonta is somewhat disturbed by Korekiyo's unusual mannerisms.

In Chapter 1, Korekiyo complements Gonta on his strength when he lifts up a manhole cover effortlessly. However, Gonta is angered when Korekiyo mentions that he could easily crush a child's skull. During the first Class Trial, Korekiyo warns Gonta that without an alibi, he will be voted as the culprit behind Rantaro Amami's murder. However, Korekiyo does say he would like to believe in Gonta, but without evidence, he cannot. Once sufficient evidence has been provided, he no longer suspects Gonta.

In Chapter 2, Korekiyo is captured by Gonta and forced to partake in an insect meet and greet, along with most of the other students. Before the Class Trial, when Gonta says that they have no choice but to be ready, Korekiyo laughs and remarks that he is quick to understand. During the trial, when Miu Iruma brings up how Gonta could've thrown Ryoma Hoshi's body through the poolside window, Korekiyo defends him by saying the tank would've had to have been placed carefully to prevent the glass pane from shifting.

In Chapter 3, after the Class Trial, Gonta was disgusted with Korekiyo when it was revealed that he had murdered Angie Yonaga and Tenko Chabashira for his deceased older sister, and said that his actions were so wrong.

In the chapter “Hair-Raising Panic!” from the V3 Anthology, Gonta and Korekiyo stumble down a flight of stairs, tying their hair together and ending up getting stuck together for an entire day.

When first confronted with the situation, the character Kokichi Oma offers to cut Korekiyo’s hair, but even after refusing, Kokichi still attempts to separate their hair with scissors. Korekiyo explains that he must keep his hair long, as it was a memento to his sister. Korekiyo, when confronted with the idea that he would kill for his sister, is defended by Gonta, insisting he will “find another way” before running away holding Korekiyo in his arms.

Once the two are alone, Gonta apologizes to Korekiyo, saying that they can cut Gonta’s hair the next morning, meaning he has to be stuck with him all day. Korekiyo then reassured him by saying that he will take this opportunity to observe how he goes about his daily life. Gonta thanks him with enthusiasm, right before accidentally slamming Korekiyo’s head against a wall via moving his head too quickly.

The two are then seen for 3 panels going about their day, the first in Gonta’s Ultimate lab, with Korekiyo admiring the butterflies behind him, the second having the two eating together, and the third having Gonta using the restroom (the third panel seemingly placed there for comedic effect.)

The next page shows that Gonta showed concerns of how the two would fit into one bed, and Monokuma allowed them to stay in the Love Hotel, a place where the protagonist would often go to have romantic interactions with other members of the cast. Korekiyo then asks Gonta if he’s a light sleeper, concerned of being crushed in his sleep. It is of note that Korekiyo imagines Gonta sleeping in only his tie.

The next page shows the two sleeping in the same bed, and Gonta opens up and apologizes for having Korekiyo be forced to stay around him all day, and asks if he is interested in bugs at all in an attempt to connect with him. Korekiyo says that he’s interested in people, but that many insects that’ve influenced humanity. Gonta, now excited, shoots up from his position and begins drawing more connections between each others talents.

In the next panel, Gonta expresses happiness that he grew closer to Korekiyo and thanks him, and Korekiyo thanks Gonta in return for defending him earlier that day against Kokichi in relation to his sister, and thanks him for understanding that.

However, in the next page, it is revealed that Gonta was harboring the eggs of various bugs in his hair while he waited for them to hatch, disgusting Korekiyo and making him lose his typical-formal speech pattern.

“Kehehe... You are quick to understand. It's as though Monokuma has you trained.”
— Korekiyo on Gonta's comprehensiveness.

“Sorry you had to hang out with Gonta all day... Um.. do you have at least a little interest in bugs, Shinguuji-kun...?”
— Gonta trying to connect with Korekiyo while in the same bed as him.

“Gonta's so glad he got a little closer to Shinguuji-kun today... Thank you!”
— Gonta expressing delight at being closer to Korekiyo.

“...Thank you as well. My sister wouldn't be happy if I killed someone to get out of here... Thank you for understanding that”
— Korekiyo thanking Gonta for defending him earlier.

The ship is fairly popular in the fandom, and is among the more popular shipping choices for Gonta in particular. On Korekiyo's side, the ship tends to be overlooked in favor of Amaguji and Shinsai. On Archive of our Own, it is currently the second most-written ship for Gonta, and the third most-written for Korekiyo. 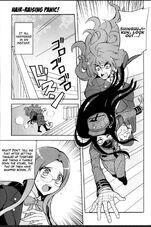 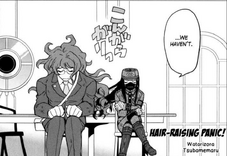 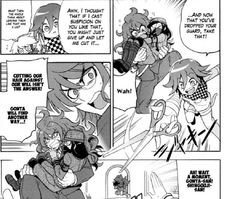 Gonta carrying Korekiyo away from getting his hair cut 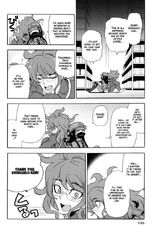 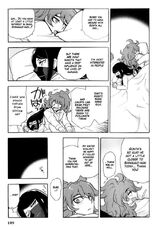 Gonta and Korekiyo opening up to eachother while sleeping together 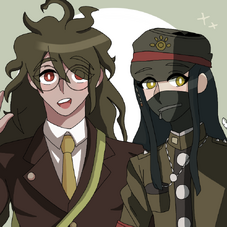 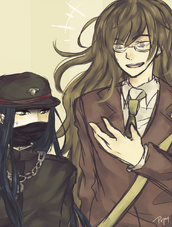