View source
Woah! That's one small ship!
• THIS ARTICLE IS A STUB. YOU CAN HELP GreenWisp SHIPPERS EVERYWHERE BY EXPANDING IT •

GreenWisp is the slash ship between Lloyd and Jay from the Ninjago fandom.

Jay and Lloyd are really good friends throughout the series, they grow closer and show that they really care about each other. In Season 5, when Lloyd was possessed by Morro, Jay, and others would have done anything to rescue him from Morro's clutches. At the end of season 7, Jay was the first ninja to decide Lloyd should be their master after Wu was lost in time with the Time Twins. In season 3, Lloyd introduced Jay to Fritz Donnegan and got him hooked on the character. In season four, Jay denied Lloyd's offer to go back to the team but still went along with meeting him. Jay had faith in Lloyd as he believed the latter would save him and the others from Chen after they were captured.

It was shown that Lloyd trusted Jay enough to accuse Harumi of being the Quiet One, as Harumi knew of Lloyd’s Oni heritage, which she could only know if Jay had told her or if she was the Quiet One. When Garmadon defeated Lloyd, Jay and the rest of the ninjas gave Lloyd his elemental power to heal him. In Episode 3: Lloyd and Jay were watching Cole on T.V singing with Awkward Faces. Jay and the rest of the ninjas helped Lloyd Catch Up to Mr. E. In “True Potential”, Jay and the other ninjas begged Lloyd not to face his father alone. The green ninja did not listen to them and ended up losing the fight. When Harumi was trying to ressurect Garmadon, Lloyd was in a cage, Jay and the other ninjas came to rescue him. They were able to stop Harumi from resurrecting Garmadon, but they were not noticing his re-entry into Ninjago.

March of the Oni

When Lloyd and the Ninjas visited Kryptarium Prison to let out Garmadon. Jay said, “Are we really gonna let him out?” Lloyd said, “What choice do we have?” Lloyd thinks his father could help defeat the Oni, and Jay was fine with it until he had to be roommates with the four-armed ex-emperor. In episode 3: Lloyd and Jay (and the other Ninjas) were Sad that Cole Fell into the Cloud, Lloyd got Angry at his father for not caring about anyone but himself. In Episode 4: Lloyd and Jay (and the rest of the Ninjas) were fighting the Oni, Lloyd Discovered that the only way to defeat Oni (Destruction) With Creation, Lloyd and Jay (and the Ninjas) Used the Legendary Spinjitzu Move: the Tornado of Creation to Defeat the Oni.

Jay and Lloyd didn't interact that much in this season. In “Ninja Vs Lava”, Lloyd was actually annoyed by Jay saying “bro bro goo goo”. Lloyd says that it does not help, but it just makes things worse. The ninjas battled Aspheera with the Forbidden Scrolls, They ended up winning, at the cost of losing Zane with the Scroll of Forbidden Spinjizu. Zane ended up in the Never Realm. They ended up using Aspheera’s staff to travel there. When the ninjas got in, the Land Bounty was on the edge on a cliff, they got out of it quickly, then it fell, Cole lost the Travelers Tea in the Land Bounty. the Ninjas were arguing of how they were gonna get back home. the Ninjas came across wolves and frozen villagers, When they were getting attacked bye wolves villagers came to save them and show them to there village. Later in the season, the ninjas separated, Lloyd was going to rescue Zane while Jay was protecting the village.

In Terra Domina, Lloyd, Jay, and Nya did the first level of the side-scrolling game. The second level has Lloyd fighting what appears to be Harumi as the boss. Jay tried to tell Lloyd that it is not the real Harumi he met in the previous seasons, but Lloyd was too busy that he didn't hear Jay’s warning. Lloyd finally realized too late and he and the Harumi avatar killed each other. When Lloyd and the others first got into prime empire their first mission was to find Jay. When Lloyd and the other ninjas where under attack by the Red Visors the League of Jays came to the Rescue.

Lloyd and Jay are good friends. When Lloyd feels sad about his father, Jay will try to cheer him up. Lloyd later awakened Meowthra, making Jay and the other ninjas get mad at him. Later in the movie, they started to trust each other again and become friends again.

“My mom is weird and collects seashells, your dad levels cities and attacks innocent people... so, they’ve all got their quirks, you know?”
— Jay trying to cheer up Lloyd in the movie

“Since when can Jay dance?”
— Lloyd to Kai and Cole

This is one of the most popular slash ships in the Ninjago alongside MossShipping and GreenFlame, two more ships involving Lloyd and a ninja. 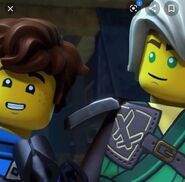 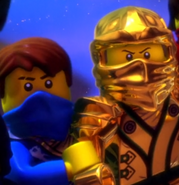 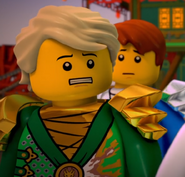 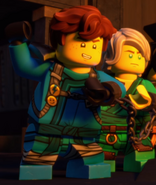 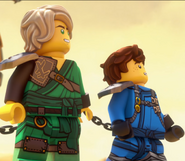