“Did I know, in my heart of hearts, what Gellert Grindelwald was? I think I did, but I closed my eyes.”
— Albus to Harry Potter, about Gellert.

Grindeldore is the slash ship between Albus Dumbledore and Gellert Grindelwald from the Harry Potter fandom.

Dumbledore and Grindelwald first met when they were introduced to each other by Bathilda Bagshot when they were seventeen. As they had much in common, they got along instantly. They both agreed on ideals about the structure of the wizarding society and were both keen on finding the Deathly Hallows. The two grew close, and entered into a short-lived romantic affair, which lasted two months. "It was a love relationship" [1].

The brief affair lasted two months, during which the boys made plans to find the Deathly Hallows and lead a wizarding revolution. They also made a blood pact, which kept them from attacking each other. During this time, Albus neglected his younger siblings, Aberforth and Ariana. When Aberforth confronted the pair over this, Grindelwald lost his temper and attacked Aberforth. Albus rushed forward to defend his brother, and during the duel, Ariana was killed. Grindelwald fled, his friendship with Albus over.

Over the next years, Grindelwald caused chaos throughout the wizarding world based on his beliefs about their society. Dumbledore refused to face him out of fear that Grindelwald would blame him for Ariana's death, as well as because of the blood pact the two had made in their teens. Despite everything, Dumbledore retained strong enough feelings for Grindelwald that he saw him in the Mirror of Erised as his heart's deepest desire. He felt enormous guilt over this. Grindelwald himself also seemed to still love Dumbledore to some extent and remained interested in him, as he went out of his way to ask Newt about his relationship with Dumbledore and later on spitefully mocked him for Dumbledore's affection for him, indicating jealousy of the younger and inferior wizard for having Dumbledore's favor. Notably, while seeking out Credence to defeat Dumbledore, Grindelwald indicated he was bitter over Dumbledore's abandonment of their shared dreams to a personal level. Eventually, though, after Grindelwald murdered Leta, one of Dumbledore's students, Dumbledore was able to finally muster the strength to oppose Grindelwald and by a stroke of luck, successfully broke the blood pact between them while stopping Grindelwald from attaining Supreme Mugwump position during the election at Bhutan. By 1945, the two greatest wizards in all of history initiated a duel of such legendary proportions that it was forever considered perhaps the greatest duel ever to be fought in the wizarding world. Despite the intense and extreme fight Grindelwald put up, Dumbledore ultimately triumphed due to being a "shade more skillful" and took possession of the Elder Wand and imprisoned Grindelwald in his own prison, Nurmengard.

This pairing had a small popularity before J.K. Rowling announced in 2007 that Albus Dumbledore was gay, with a romantic attraction to Gellert Grindelwald. Although many fans embraced the idea of Dumbledore's sexuality, many also wished that Rowling had included his sexuality and relationship with Grindelwald in the books. After the announcement, more fanfiction and fanart were produced for the pairing. Many displayed Dumbledore's life as a teenage boy, with exploration into the relationships between Albus, Gellert, Aberforth, and Ariana. Also, the pairing was often written with Grindelwald reciprocating Dumbledore's feelings, ultimately leading to the eventual duel between both of them. 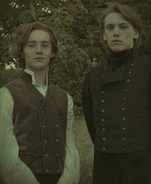 Fantastic Beasts The Crimes Of Grindeldore?