Not So Different, Opposites Attract, Brains and Brawn, Tragic Bromance

Guili is the het ship between Guizhong and Zhongli from the Genshin Impact fandom.

Guizhong and Zhongli have known each other before the Archon War — the two are both gods, Guizhong the God of Dust, and Zhongli the God of Contracts. The two first met in Dihua Marsh, in a garden of glaze lilies. Guizhong showed Zhongli her stone dumbbell, the Memory of Dust, hardly suppressing her joy. The Memory of Dust is a catalyst weapon in the game that was released on the weapon banner in Zhongli's May 2021 re-run. Guizhong had challenged Zhongli to open the weapon, which contained her wisdom. In the description of the weapon, Zhongli was said to still have not learned how to open the dumbbell.

After their meet, the two eventually became allies, in which Guizhong's intelligence complemented Zhongli's prowess. On certain occasions, they would eat meals together with the Adeptus, Cloud Retainer, and the Stove God, Marchosius, on top of Mt. Aocang. The two gods founded the Guili Assembly together, named after a combination of the names they used at the time. However, the Archon War began soon afterwards as monsters and evil gods emerged.

Guizhong and Zhongli, along with most Adepti, fought to protect the people of the Guili Assembly. Sadly, Guizhong was killed during the war 3,700 years before the events of the game. She died amongst Glaze Lilies, which were the same flowers in the garden she and Zhongli met; she had smiled at Zhongli and told him to forget about the dumbbell, lamenting the end of their journey together. Guizhong's body had dissolved into dust after she died, and the Guili Assembly was destroyed in a massive flood. Zhongli relocated the people to Liyue Harbor, where he taught them how to build homes.

Some Guili shippers imagine Ningguang being the incarnation of Guizhong, which brings the ship Zhongguang. Others prefer to ship Guili on its own instead of bringing other ships into it. The ship's main rival is ChiLi, a ship between Zhongli and Tartaglia, and ReZhong, the pairing between Azhdaha and Zhongli. Guili is somewhat small but still growing amongst social media platforms. Fan art between these two mainly contain angsty themes with Zhongli holding onto Guizhong as she's dying.

“What a silly notion. There was no formal contract between them. They were merely two people walking the same path for their own reasons...”
— Memory of Dust, description

“How fascinating. In all the documents I've ever read, I've never come across any mention of two gods who coexisted peacefully... let alone who actively worked together... It seems they were more than two allied gods — they were best friends.”
— Soraya, a researcher from Sumeru, in World Quest "Treasure Lost, Treasure Found"

“The elderly of Liyue tell of a legend: in that innocent age, and seized by a sudden desire to make mischief, the crafty Guizhong put her hands over the Lord of Geo's eyes and, laughing as she did so, released glittering blue seeds from her long sleeves, scattering them over the Guili Plains. Then, to the gentle sound of laughter and poetry from the two God-Kings, sparkling, glaze-like, blue flowers began to burst into bloom across the upper reaches of the countryside. [...] Perhaps the legend of this beautiful flora, and its origins in the playfulness of the gods all those millennia ago, is nothing more than a romantic tale.”
— Unreleased content from "Customs of Liyue, Volume 4: Glaze Lily"

“So it was also with this precious sword, carved as it once was to be given as an expensive gift to a certain someone. This jade too was once cut for love of peace and luxury. When wine vessels are filled with blood, and when tender feelings are ripped asunder by cold ambition and reduced to dust on the wind, gifts ungiven and bonds unspoken will become sharp blades with which to cleave erstwhile friends.”
— Primordial Jade Cutter, description 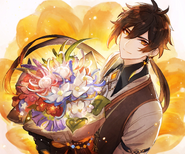