GuoLing is the friendship between Xiangling and Guoba from the Genshin Impact fandom.

Xiangling and Guoba have been companions for a long time. Ever since Xiangling, who used to be a child, stumbled into a shrine, she was tired and put the Chili-Mince Cornbread Bun on the offering table. Intending to eat it later, but once she woke up, she saw Guoba. Who had eaten her Chili-Mince Cornbread Bun. Undeterred, Xiangling then gave him some more food, and afterwards, Guoba started following her. Which, Xiangling named him Guoba. Unbeknownst to her, during the Moonchase Festival, she found out that Guoba was an ancient god called 'Marchosius'.

When Xiangling, Guoba, the Traveler, and Keqing went to Wangshu Inn. Approaching the dinner spot, Xiangling says that she'll sit next to Guoba. Which Guoba responds with happiness. While Xiangling was having a coversation with the others, Xiangling realizes that Guoba ate Keqing's Golden Shrimp Balls. Thus, Xiangling told him that he should be in his best behavior when their with friends. Xiangling apologizes to Keqing.

At the beginning of the show, Yanfei introduces finalist which were Smiley Yanxiao and Xiangling, Guoba was also there as Xiangling's assistant. During the show, when Xiangling notices Smiley Yanxiao, Guoba comes up to him. Which made Xiangling also noticing Guoba at the process. Therefore, Yanfei and the judges also noticed this. Keqing comments that Xiangling's assistant, (referring to Guoba,) is more like a family to her. And tells that Guoba was performing strange dance move to cheerlead for Xiangling was a little bit unexpected. Xiangling then confirms about Keqing's comment and how Guoba just likes to watch other people cook.

While trying to reawaken the statue, after the Chili-Mince Cornbread Buns was offered to the statue, Xiangling reminisces about how she first met Guoba. Until, the statue bursts open, the statue looked like Guoba, which Madame Ping came in and confirmed that Guoba was the deity that they were looking for. Which made her shocked, Xiangling frowns and asks Guoba why he didn't say anything as it was kind off a big deal. Though Guoba seemingly didn't understand her since he couldn't speak. Madame Ping encourages Xiangling to not be sad as since she is his friend, she should take care of him, go out to walk and play with him. Xiangling answers that she will. Keqing reasons Xiangling, saying that he follows her because she respects her. Which Keqing informs her that she might be the first ever person in history to give Guoba, the God of Stove, an experience of being a satisfied customer, which makes her a remarkable chef.

GuoLing is not that well-liked in demand as a romanticized ship. However, ever since the reveal of Guoba being an ancient god, the Genshin Impact fanbase has pointed it out as Xiangling being a 4 star. Yet, she has a god as a companion of hers. As often, most fan arts illustrates Xiangling with Guoba. Although there isn't that much with Xiangling and Guoba in fan fiction as Guoba is omitted. 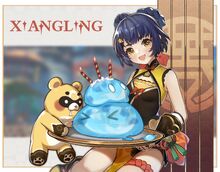 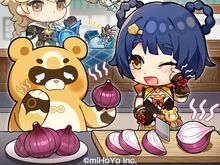 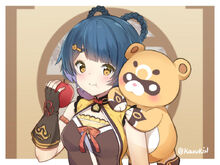