Marvel
Into the Spiderverse

Friends; Gwen is dead in a few of the main Spider-Man universes

GwenMJ is the femslash ship between Gwen Stacy and Mary Jane Watson from the Marvel and Into the Spiderverse fandoms.

Gwen and Mary Jane "MJ" Watson are friends who are the love interests of Peter Parker, aka Spider-Man. There have also been a few known universes where both or just one of the two teenage woman are spider-themed heroines themselves. In ones where a still alive Gwen is the heroin, Spider-Ghost/Gwen she keeps her hero life a secret from MJ for her friend's protection, like Peter does with both of them until they uncovered his secret. The same thing has happened with MJ learning that Gwen is a web swinging heroine.

When Gwen and MJ met for the first time, Gwen took MJ's arm and whispers in her ear "We're going to be best friends" and meant it, but MJ's troubled home life keeps her from forming close ties even though she expects Gwen's friendship and spends time with her. While Gwen tries to fulfil her promise of becoming MJ's best friend, as for MJ she kept Gwen at an arm's length like she does with the other people in her life; due to her hard home life while pretending to be an up beat person at school.

After Gwen died, MJ talks about the person she was to her. Since she believed that Gwen can find the chip in the wall she build between her and the world, and how Gwen saw the frightened abused kid behind the party girl mask MJ wears. Despite seeing that side of her, Gwen didn't push MJ about it and simply gave her friend the space she needed. Along with Gwen giving Mary Jane the courage she needed to stay by Peter's side during a hard time in both of their lives, while doing it for her [1].

Like in the few known Spider-Gwen/Ghost universes, the Marvel Rising series has the two teenage girls as band mates with MJ on lead guitar and their singer, while Gwen is on drums and does a bit of singing herself. Even though they are close, Gwen keeps her superhero life as Spider-Ghost a secret from MJ and the others. One time when Gwen was working on her drumming in her Spider-Ghost costume her secret was nearly exposed to MJ and their fellow bandmates, but Gwen was able to quickly change into her civilian clothing before they enter the garage and comes up with an excuse to explain her reason for being there, while hiding her costume in her bag before any of them see it.

“Didn't doubt your friendly neighborhood Spider-Gwen, did you MJ?”
— Spider-Gwen in A-Force Vol 1 5

MJ and Gwen are two of the main and well liked female characters in the Marvel Spider-Man series, who have had a few interactions with one another in a few of the known Marvel universes. A lot of fanart depicts the two kissing, with Spider-Gwen hanging upside-down in the style of the famous scene from Sam Raimi's Spider Man, since most of the ship's fan art is of MJ with the alternate Spider-Gwen than with civilian Gwen from the main universe. Along with having Gwen web swing MJ around, like she does in some of the the comics.

On AO3, the ship has 119 fanfics. GwenMJ also has a decent size fanbase on Tumblr, FanFiction.net and Deviantart. 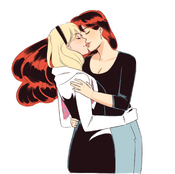