Hadeficent is the het ship between Hades and Maleficent from the Disney fandom.

As Hades and Maleficent are from different series, they have never met in canon. While "Halloween With Hades", one of the Halloween production episodes for the animated Disney crossover TV series, the House of Mouse, has Hades trying to gain Maleficent's affections and gets burned up whenever he sees her with other another Disney Villain that isn't him, he asks Mickey how he could win her heart; even though Mickey's kind approach advice to Hades didn't sway Maleficent she does decides to date him once she saw how cruel the God of Death can be. Maleficent and Hades are also two of the recurring Disney villains in the Kingdom Hearts series, who have allied themselves with each other on more than one occasion, as after Maleficent began her conquest of the worlds, in the first Kingdom Hearts game, Hades became one of her allies in her ring of villains. The two have also serves as bosses in a few of the same games. While in the Disney Channel original film series of Descendants, the third film reveals that its live-action versions of them were once married to each other until Hades abandons both Maleficent and their daughter, Mal. As he had enough of him and Maleficent making each other miserable after the love they had for each faded away, he had believed that him leaving his family was the best thing for his daughter; the one good that came out of their former relationship.

Both Hades and Maleficent are classic Disney Villains that are based on villain characters in the original stories that their films are based on. The Greek death god from the Greek myths and the angry wicked fairy from Sleeping Beauty. Along with black being one of the colors on their main clothing and have their own fire related abilities. As well as black colored pets, Cerberus the three-headed guard dog and Diablo the raven. The two are also family figures to the main protagonists in their films, since Hades is Hercules's uncle while the live-action remake films of Disney's Sleeping Beauty in the Maleficent series has the titled character as Aurora's caring godmother. Along with both the events of the Maleficent film and Descendants 3 having the two as redeemed villains through the kind of love that a guardian-like figure and parent would have for their child, Aurora and Mal.

In their first Disney films, both of their actions were due to an negative emotion. Since Hades envied his brother and the other gods as he longs to be the ruler of Olympus instead of the Underworld, and when he learned the his nephew is destined to stop the God of Death from reaching his goal Hades had tried to get rid of him, just as Maleficent was enraged that she wasn't invited to special event and decides to cures the princess that is the main reason for the celebration. To ensure that their plans for Hercules and Aurora follow through, they target Megara and Philip to ensure that they don't get their happy ever afters.

Maleficent Bertha, more commonly known by her nickname Mal, is the daughter of the Disney Descendants (film) versions of Maleficent and Hades. After the two split up by Hades abandoning his ex-wife and leaving her to raise their daughter all on her own, he didn't keep in touch with either of them, until Mal needed the power of her estranged father's ember to overpower her mother's stolen sceptre. Mal's hair color is normally purple, one of Maleficent's known colors, but when Hades stole some of her powers parts of it began to turn dark blue. Like her mother within and outside the Descendants series, Mal can turn herself into a dragon and has inherited Maleficent's magic powers, and Mal had used those powers and her new found goodness to shrink Maleficent to the size of her own heart; in which turns her mother into a purple lizard. While her encouraging Hades to do something good made him a hero, and they were finally able to form a loving father-daughter bond between them. When Hades lends his ember to Mal on the isle, however, he tells his daughter that since she is only part Hades she wouldn't be able to use the ember in its full potential. Meaning that Mal's inherited god heritage, that makes her a demigoddess, isn't very strong in her, possibly due to her mother's dark fairy magic.

The ship could simply be due to them being classic Disney Villains that have met and allied themselves with each other in a few canon Disney crossovers, like Kingdom Hearts, along with the House of Mouse Halloween episode, "Halloween With Hades" featuring Hades having an romantic interest in Maleficent. After Descendants 3 revealed Hades to be Mal's father, a few fans began to believe that the House of Mouse episode of him and Maleficent might have predicted it, or could have been the reason for it. Before it was officially revealed in the third film, a few fans had theorized that Hades is the most logical choice of being Mal's father, since someone like Maleficent would want to marry or have a child with a powerful villain, next to her. As well as the fact that shortly after Mal approaches blue, colored flames in the Descendants short film, she says "Dad". A few fans are also hoping that a fourth Descendants film would have Hades and Maleficent getting back together, for their daughter.

On AO3, the ship has 23 fanfic, while fanfiction.net currently has 8 in both its Descendants category and its crossover category of Hercules and Sleeping Beauty, along with its Kingdom Hearts category only having 2/3 fanfics on the two. 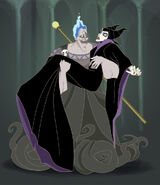