Hallura is the het ship between Hunk and Allura from the Voltron: Legendary Defender fandom.

Hunk and Allura don't have much interaction in season one until the season finale, "The Black Paladin", when Hunk smashes the Yellow Lion in Zarkon's ship, exiting though it's mouth. Hunk enters the cell Allura is being held in, Allura is shocked to see him. She hopes that the rest of the team didn't bring Voltron to the right to Zarkon, moments later she asks about the Black Lion, soon hearing Shiro in pain via her comms. She runs out of the cell with Hunk following behind her, him telling the rest of the team there's been a change of plans. They soon run up to Shiro getting knocked down by many Haggars, Hunk aims his gun but is unsure which is the real Haggar, Allura places the witch out and tells Hunk to shoot, them both saving Shiro.

After their battle with Zarkon, along with the disappearance of their friend Shiro, Hunk and Allura continue their affects to free the universe from the Galra, by forming a Collision with the planet leaders they had freed. Hunk uses his cooking skills to prepare a meal for their first meeting, while Allura uses her states as a princess and the connection she has with Hunk and the other Paladins to bring them to their side. The meeting went well until one of the planet leaders asked them about Voltron. Knowing that they need Voltron, Hunk and Allura go to see the Black Lion in hopes that it would take one of them to serve as Shiro's replacement, but it chose Keith over them. Even though Allura was still able to fight beside Hunk as a fellow Paladin when the Blue Lion chose her to be its knew Paladin and Hunk's fellow leg, while Lance became the Red Lion's new Paladin.

Throughout the first part of season 7, Allura and Hunk spent little time together, due to the time Allura is spending with Lotor while Hunk is helping Pidge to merge their Altean tech with Galra tech.

After Allura finds Hunk playing Monsters and Mana with Pidge and Coran, she decides to join in the fun. Hunk's character is a wizard named "Block" while Allura's is a archer with magical arrows, who joins Block on his quest to save his village from the curse that turned its people to stone. Hunk and Allura had great fun playing the game as they worked together, along with using their mana magic to heal one another, to win.

Due to Honerva's influence and lies to the Alteans she recruited from the colony, neither of the Alteans that Hunk and Allura have managed to salvage from the wrecked mechs would talked to her. Seeing how hurt Allura is by their rejection of her, after believing for so long that she was the last of her kind until she learned that she isn't, Hunk decides to use his cooking skills to warm the Alteans up to her and Coran with one of Altea's deserts. In hopes that it will help them remember a time that they were happy before Honerva found them. Hunk's dish worked as not long did the Alteans give Allura a chance to bond with them through stores of Altea, they had also agreed to help them defeat Honerva. Who had implanted a dangerous entity within each one of them, before Allura allows the one she freed from Tabo to entry her body.

When Hunk and the others got back from Clear Day they learned that Allura had collapsed in their absence, along with the disappearance of the entity. After Allura woke up in the med bay she calls for a meeting with Hunk and the others so she can explain the reason for her actions, along with her plan as to how they can uncover Honerva's by using Voltron to enter her mind. Hunk wasn't sure about it, but he didn't let it stop him from supporting Allura as they use their Voltron bond to enter Honerva's mind. After they passed the dangers that protected Honerva's thoughts and memories, along with freeing the Paladins before them, they learn that Honerva plans to seek out a perfect reality where she can live with her family; but her actions would destroy the ones she'll need to pass through in order to reach it. Knowing that they can't let Honerva go through with it they form a plan to stop her, after Allura woke up from over using the entity within her.

Once Allura, Hunk and the others were able to stop Honerva from destroying the last remaining reality and convinced her why they should exist, Allura makes the choice to undo the damage by giving up her own life. Since she knows that Hunk and the rest of their friends can bring the rest of the universe together without her. Hunk was sad by this as he didn't want them to say goodbye. To keep Allura's memory and dream of peace alive, Hunk decides to use his cooking skills to bring the universe together, one meal at a time.

“We gotta protect the Princess!”
— Hunk, after he sees Allura flying down, Rebirth.

Hallura is considered a rare pair; it has a small following, though dedicated fans. 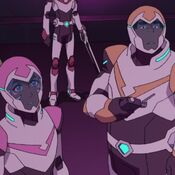 pinkpupa.tumblr.com
Add a photo to this gallery

Retrieved from "https://shipping.fandom.com/wiki/Hallura?oldid=262149"
Community content is available under CC-BY-SA unless otherwise noted.