Shipping Wiki
Register
Don't have an account?
Sign In
Advertisement
in: Ships, Ships/Slash, Into the Spiderverse/Ships,
and 5 more

HamNoir is the slash ship between Peter Porker and Spider-Man Noir from the Into the Spiderverse fandom.

When the Kingpin's Collider brought the two out of their home dimensions and to the one that they become trapped him, Peter Porker and Spider-Man Noir trusting the similarities of their dimensions to the one they are both trapped in, leads them to seek sanctuary at Mary Parker's house, in her Peter's Spider lair, where the two of them meet one another beside Peni Parker. Before Peter B. Parker, Gwen Stacy and Miles Morales join them in their team-up plan to get back home.

During the final battle next to the Collider, Peni's SP//dr (her robot friend) gets destroyed by the Green Goblin. Spider-Man Noir and Spider-Ham retaliate and Peni give him the final blow with the ripped arm of SP//dr. Of course, she is still devasted by the friend she lost (who also was the last thing from her parents). She is comforted by Spider-Man, Spider-Ham and the spider that lived inside the robot. At the end of the movie, everyone goes back to their home dimensions.

The ship rose after the release of Spider-Man: Into the Spider-Verse. Fans will typically ship it as a crack pairing, and enjoy having fun with pairing. Typically drawing the two in more comedic situations or more relaxed one. A rubix cube is involved a lot of the time.

Shippers will often compare the ship to Jessica and Roger Rabbit from the movie Who Framed Roger Rabbit, as that was a movie with a human/anthropomorphic animal relationship. It's also a relationship that has an extreme height difference, as well as similarly opposite personalities.

There are some shippers who are uncomfortable with the animal/human aspect but still like the idea. Many of them instead will ship Noir with his universe's version of John Mulaney, given that John Mulaney voices Spider-Ham in Into the Spider-Verse. This also led to art and manips of John Mulaney stand up bits being said by Spider-Ham. 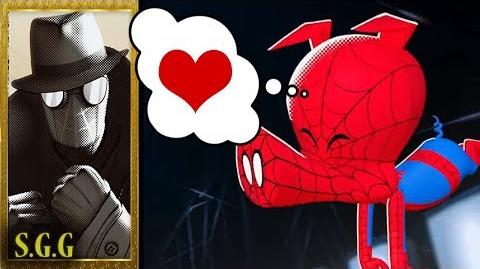 Spider-Man Into The Shipping Verse - Hamnoir
Community content is available under CC-BY-SA unless otherwise noted.
Advertisement