Shipping Wiki
Register
Don't have an account?
Sign In
Advertisement
in: Ships, Ships/Cargo, Attack on Titan/Ships,
and 5 more

“Titans really are... amazing...”
— Hange before their death

HanTan is the cargo ship between Hange Zoë and Titans from the Attack on Titan fandom.

Initially, Hange felt a deep hatred for Titans, as they killed people precious to them. Their hatred faded when they cut a Titan's head off, and realized how extremely light it was. This made them adore Titans and have the urge to capture and research them. Their obsession goes so far that they cry themselves when inflicting a Titan in their weak spot. When Eren asked about their research, they talked all night, leaving Eren tired, as we could see his eyebags. They become so obsessed with Titans that they apparently have a "naming ceremony" for them, which was introduced when they named Sawney and Bean.

Upon Eren accidentally transforming, Hange became extremely excited to the point where drool was dripping out their mouth. They begged to touch it, only for the body to burn them.

When Sawney and Bean were killed, Hange became extremely distressed, and yelled in horror and sadness. It took them a while to get over it.

Their love for Titans isn't shown much after season one.

Upon talking to Erwin, Hange mentions how they forgive the Titans because they're so cute.

When Hange talks to Pieck, they offer to ride on her back, feeling the heat of the Titan's body only to be cut off and get called creepy.

Ready to face their death, Hange mentions how amazing Titans are one last time.

Hange has a great obsession over Titans, and even drools on their notes of Titan research. Their first appearance shows them with Titans' nails, leaving a terrible impression. They apparently have a "Titan Sense" which they first showed in chapter 18, although it turned out to be simple lunch boxes. Despite their intense love for Titans, they were unwilling to do the folk dance with them, and found it disgusting.

Even Levi finds it disgusting, and their obsession causes him to keep them away from him.

Hange also keeps their Titans, Sawney and Bean captured in their club room and often spends all their money buying them food.

Hange and Titans are a very popular ship, and their love for Titans caused many fans to ship it. Jokes about it have started to circulate, and a great number of fanfictions make sure to include Hange and their Titans. One thing that mada fans like this ships is the fact on how Hange was really decided to understand them, and even was decided to break Erwin's rules so they could find one titan and capture it. Also it grew popularity when she captured Sawney and Bean, and how they were really sad when they saw someone killed both titans.

Hange was mostly the only one from the Survey Corps who was really interested in understanding and studying them, unlike the other ones that were only decided to kill them and following the belief titans were monsters that reproduce out of nowhere. 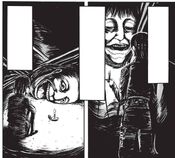 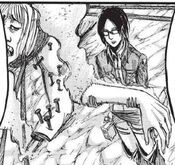 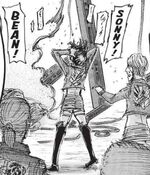 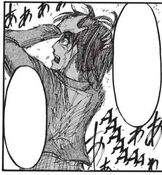 Hange crying on their knees at their friends' burned bodies

Hange talking with the Female Titan 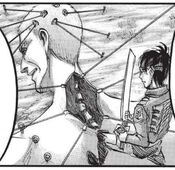 Hange remembers one of their Titan experiments

Hange blushes at Titans before dying 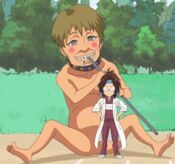