Hananene is the het ship between Hanako-kun and Yashiro Nene from the Toilet-bound Hanako-kun fandom.

Hanako met Nene when she summoned him for a wish after hearing the rumors of the 7th school mystery. She is initially shocked when she sees that Hanako is actually male. Their fates became bound together when Hanako ingests the other mermaid scale in order to weaken the curse turning Nene into a fish after she wishes to be human again. Hanako then made Nene into his assistant since he granted her wish and made her clean the toilets after school. Nene complains about doing it but tolerates it as she is grateful for the times Hanako saved her from danger. Hanako reveals that he looks forward to it every day as it made him feel nostalgic and like he had a friend. Nene then calls him Hanako-kun instead of Hanako-san for the first time, signaling their friendship.

Hanako is occasionally flirtatious and teases her often. After kissing her on the cheek to cast a spell that temporarily wards supernaturals away and asking her to go out with him in order to lure out the confession tree, Nene becomes upset as she thought he actually liked her, so she felt like her feelings were being played around with. Hanako then apologizes to her while taking his hat off and she thought that he looked like any other normal boy. Realizing how little she knew about him, she begins to seek to know more.

From then on, Hanako and Nene spend much of their time at school together solving problems caused by supernaturals. Nene tries to find out more about him while Hanako does his best to protect her. Despite not being human anymore, Nene has called Hanako her friend many times, which surprised others who are not fond of supernaturals.

After she learned about Amane from the memories recalled after destroying Tsuchigomori's Yorishiro, Nene realizes for the first time that he really is dead which caused her to be awkward around him for some time. After giving him donuts, Nene decides to tell Hanako that he was "more trouble than it's worth" but that she will stick around him anyway because she liked Hanako as a friend. In the next chapter, Hanako thanked Nene, telling her that it was the first time a girl told him that she liked him, and opening up to her a bit more about his past, ending any awkwardness between them. Maybe due to fear of her finding out more or not being ready to tell her, he says that he will tell her more in the future and they made a pinky promise for her to stay as his assistant until that time comes.

Nene deeply trusts Hanako as she believes that he will help her and immediately calls his name during dangerous situations for help. Hanako, on the other hand, tries his best to let her live a happily life knowing that her lifespan is very short. It is implied that they are having romantic feelings. Nene has blushed several times such as when they held hands and she kissed him on the cheek after seeing that Hanako felt down. In chapter 40, Nene noticed that Hanako was feeling quite down, not knowing about her short lifespan. As she noticed this, Nene kissed Hanako on his cheek and said "It's just a charm to make you feel better, or something.." implied to what Hanako said after he kissed Nene on the cheek before. Hanako blushed and got flustered, implying some sort of romantic feeling.

In chapter 58, Hanako tells Yashiro that he never cared who lived or died until he met Nene. He then accepts her wish to live a long life, and decides to let her leave the fake world. Then, he tells her to close her eyes, which Nene takes as him trying to kiss her, and leans in. However, he then pushes her off of the cloud they are on so she can escape.

Hanako was upset when Nene and Kou were going to a festival outside of school since he couldn't leave school grounds and when he became Nene's classmate due to a school mystery, Hanako shyly asked her to go watch a movie with him. He also revealed that Nene was his type. In chapter 62, Hanako also teleported to where Akane was trying to kiss Nene to stop him, appearing upset.

In Number 6's boundary, Aoi describes Hanako as Nene's crush. Later, Sumire asked Yashiro whether or not she and Hanako were a couple, which Nene denies. However, when she describes Yashiro as being 'just like her' for being in love with an apparition, she doe not deny it.

When Hanako comes to save Yashiro at the end of chapter 67, he says that he 'can't just let some nobody out there take [his] assistant as a bride.'

In chapter 56, Nene tells Kou "I love Hanako-kun and this world". A few pages later, Kou tells Nene that "The one person [Hanako] always ends up forgiving is only ever you, Senpai!", implying that Nene is the person that Hanako cares about the most.

In chapter 74, Kou asks Nene if she likes Hanako. Nene gets flustered, saying that her feelings towards Hanako aren't important in this situation.

“I'll do it. I want to change back! Please, Hanako-san! Make me human again!!”
— Yashiro Nene

“I'll have you pay me back for your body.”
— Hanako

“I love Hanako-Kun and this world.”
— Yashiro Nene

Hananene is the most popular ship among the Toilet bound Hanako-kun fandom, making Mitsukou, a ship that parallels Hananene place 2nd. It is implied by the author themselves that Hanako-kun & Yashiro Nene have romantic feelings for each other. It can be argued that the two are, in some way, a romantic couple, since Hanako asked Nene on a date, and Nene accepted. 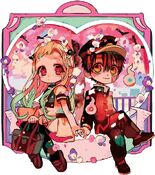 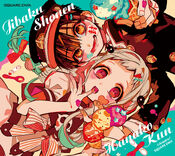 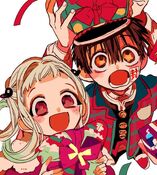 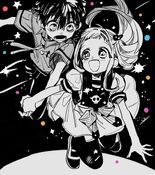 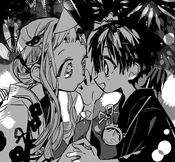