• Androids and Detectives — They work together in solving “deviant” related cases.
• Living Emotional Crutch — Connor is this to Hank, as it’s how well or poor their relationship is throughout the story.

Hannor is the non-binary ship between Hank and Connor from the Detroit: Become Human fandom.

Depending on the player’s decisions, Hank’s relationship with Connor is the most impactful towards Connor’s growth into a weapon or an individual. Based on Connor’s actions, Hank’s attitudes regarding Connor will shape from anywhere to hostile or friendly, even family-like. The relationship between the pair, regardless of the route determined, influences both character’s arcs tremendously.

The foundation of Connor and Hank’s relationship rests on the notion of difference and progression. The characters, acting as the perfect counterpart of the other, Connor being the linear and Hank the turbulent, serve to stabilize the extreme behaviors of their partner; improving or damaging their existing conflicts.

Particular actions that affect Connor’s relationship with Hank are choices in speech, his decisions on how to deal with deviants, the number of times he dies, and his status as Machine or Deviant.

Police Officer, to Connor – “Androids are not permitted beyond this point. ”
Hank – “It’s with me!”
— The Painter.

Connor – “This morning, when we were chasing those deviants, why didn’t you let me cross the highway?”
Hank – “‘Cause you could have been killed!”
— Jericho.

Hank – “What about you, Connor? You look human, you sound human, but what are you really?”
Connor – “I’m whatever you want me to be, Lieutenant. Your partner, your buddy to drink with, or just a machine. Designed to accomplish a task.”
— The Bridge.

“I’m not programmed to say things like this, but… I really appreciated working with you. With little more time, who knows… we might have even become friends.”
— Connor to Hank.

Connor – “That human means nothing to me! You can kill him you want, I don’t care.”
Fake Connor – “I have access to your memory! I know you’ve developed some kind of attachment to him.”
— Should Connor try to bluff. 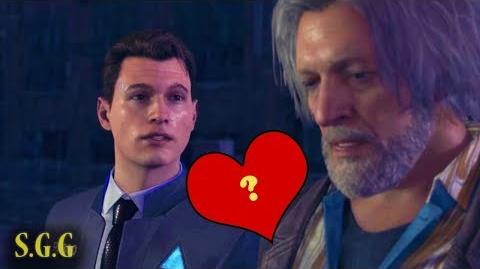 Retrieved from "https://shipping.fandom.com/wiki/Hannor?oldid=170665"
Community content is available under CC-BY-SA unless otherwise noted.