Hansoff is the slash ship between Hans and Kristoff from the Frozen and Once Upon A Time fandoms.

Kristoff first heard about Prince Hans from Anna and how she agreed to marry him shortly after they met. Kristoff thought that Anna was crazy to do so and asked her questions on what she knows about him, along with him telling her a few men facts that she may not know about Hans, yet. Even though Kristoff doesn't know Hans very well, apart from the very little things that Anna has told him about the man, he decides to trust Hans when Anna was in danger, and had already respected her engagement to Hans. Kristoff then learns that Hans never cared about Anna and tried to kill Elsa. He starts to walk towards Hans to punch him, but Anna stopped him before he could; and she does it instead.

Kristoff mentions Hans, by saying his title instead of his name, as he tries to clam a worried Elsa down. When he and Elsa were alerted that Hans has returned to Arendelle with an army that is making its way to the kingdom, Kristoff decides to sneak into his camp so they could learn what the prince is up to, since Kristoff knows the mountains very well he'll be able to both find and spy on Hans without his knowledge. When Elsa told Kristoff that he'll handle it, he choices to disobey his Queen and spies on Hans along with only Sven by his side, as he learns what Hans seeks before he makes his move; as well as knowing where the urn Hans seeks might be hidden. After he alters Elsa of this and he knows a short cut that would allow him to find the urn before Hans does, Kristoff makes his way to it with Elsa by his side. Hans, however, arrived at the cave shortly after Kristoff and Elsa found the urn and as they fought some of Hans' brothers, Hans catches Kristoff off guard and holds a sword against Kristoff's neck as he threatens to kill him. Hans mocks Kristoff and the relationships they both had with Anna, before Hans forces Elsa to trade the urn for Kristoff's life, who begs Elsa to not give into Hans' demands. When Hans opened the urn, they were all surprised to learn that someone else was already in it and because of Hans' words to Elsa, Kristoff could only watch as the Snow Queen freezes Hans and nearly faced the same fate himself if Elsa didn't reassure the Snow Queen that Kristoff is a friend.

Even though Hans was frozen into solid ice, it didn't stop his brothers from attacking Arendelle, to which has Kristoff and Anna fighting them to ensure that they don't take over their kingdom, until all of Arendelle was frozen in ice by the Snow Queen. When the kingdom finally thawed out, Kristoff wasn't the only one to be free from the ice as Hans was also freed from his frozen state and wanted to finish what he started. To ensure that Arendelle becomes his, Hans set events that would prevent Kristoff and Anna from defeating his army when he enlisted a pirate captain to lure the two in before he makes himself known to them. Believing that they were indeed dead, Hans took over Arendelle and made himself King. When the sisters and Kristoff returned, they removed him from the throne.

Hansoff is the main slash ship of the Frozen fandom, since they were the main male characters. The ship is a result of Disney fans who enjoy shipping Disney Heroes and Princes with the Villains of their film, its the same with Disney Princesses and their film's Villains. Even though the two Frozen men appeared in both the Once Upon A Time series and Kingdom Hearts III game, Hansoff isn't supported in the OUAT or KH fanbases.

On AO3, the ship has 85+ slash fanfics and only 17+ gen fics, while Fanfiction.net has 19 fanfic of the placed under pairing in the Frozen category. DeviantArt also has a fan group on the ship, cdpetee is one of the biggest DeviantArtuser supporters of the ship, even though the group was founded by Scar-x-Zira-Club and has been able to gather 90 Devi members to join it. 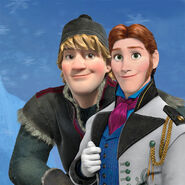