〉For reasons that have very little to do with literature and far more to do with me clinging to the plot as I first imagined it, Hermione ended up with Ron ... In some ways Hermione and Harry are a better fit〈
—JK Rowling[1]

Though Harry and Ron initially found Hermione Granger stuck-up and arrogant, the three became best friends after Harry and Ron saved her from a troll in their first year, and she in turn lied to keep them from getting in trouble. Her quick mind was at times the only thing that saved the three friends from potential failure in both life-threatening and every-day situations. Hermione was always with Harry and was fiercely protective of him, from snapping at Lavender Brown when she doubted Harry's claim that Lord Voldemort had returned, to interceding when Dolores Umbridge was about to use the Cruciatus Curse on Harry. Hermione stood by Harry even when Ron doubted him during the Triwizard Tournament, accepting his story "without question," and when Ron temporarily left them in 1997, despite her own romantic feelings for Ron. Harry, for his part, was quick to defend Hermione against Cho Chang, Draco Malfoy, and others who insulted her, and protected her physically on instinct in dangerous places.

Though their friendship remained entirely platonic, at times their closeness engendered jealousy or curiosity in others, especially those who had feelings for one or the other, including Cho Chang, Viktor Krum, and even Ron. When the two were briefly alone together during the search for the Horcruxes, Harry and Hermione experienced some "charged moments," in which the two "shared something very intense"; however, Harry remained devoted to Ginny. As Harry himself described, Hermione was one of two of his best friends. The two were also close enough to share their feelings with one another before sharing those feelings with their significant other. Through Hermione's marriage to Ron Weasley, and through Harry's marriage to Ginny, Hermione became his sister-in-law, as well as the aunt and godmother of his children.

Hermione and Harry meet on the train to Hogwarts and they have many classes together. Their interactions at first are unique since Hermione passes off to be a show off with her knowledge. One day as she’s walking to her next class Harry and Ron make a comment that hurts her feelings and they immediately request thinking she’s trying to show off. Eventually as she’s almost attacked and killed by a troll Harry and Ron come to her rescue and protect her from getting killed. When Professor Mcgonagall questions what happened Hermione covers for them and in that moment Hermione, Harry and Ron become best friends. Over the course of the first year they work together to figure out why it seems that Professor Snape desires the sorcerer stone but they’re shocked to learn he’s one of the professors protecting it. By the end of the first year Hermione and Harry are close best friends and look forward to continuing their education together.

Hermione and Harry reunite in their second year together when they meet up at Diagon Alley when she fixes his glasses. Their interactions are more important this year since students seem to be getting petrified by an unknown monster. She makes a polyjuice potion for herself, Harry and Ron to drink to try and figure out what’s going on since it appears to be the heir of Slytherin is responsible for the attacks. Unfortunately her drink didn’t work out since she unknowingly put cat hairs instead of human girl hairs and so she had to stay in the hospital wing for a period of time. While she was in the library one night she was doing research on the unseen monster and unfortunately become petrified in the process. She is revived at the end of the year when a potion is developed to heal the students that were attacked. 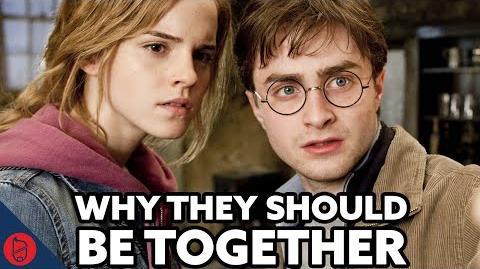 Why Harry & Hermione Should Be Together Harry Potter Theory 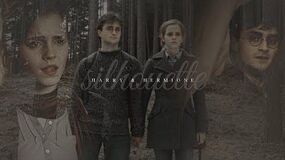 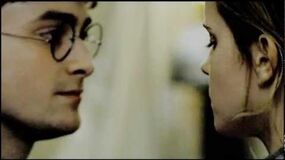 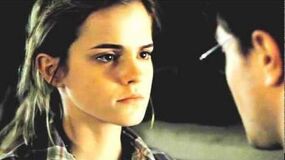 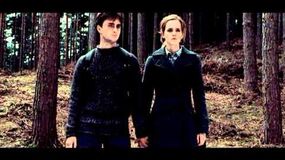 All I Want Harry & Hermione 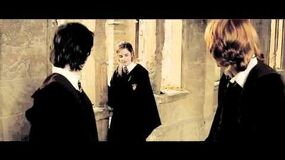 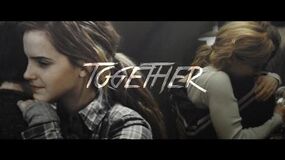