View source
watch 01:40
Boba Fett Returns - The Loop
Do you like this video?
Play Sound
This article is about the character. You may be looking for the fandom.

Harry Potter is a half-blood wizard, the only child and son of James Potter and Lily Potter née Evans, and one of the most famous wizards of modern times. In what proved to be a vain attempt to circumvent a prophecy that a boy born at the end of July 1980 could be able to defeat him, Voldemort attempted to murder him when he was a year and three months old, shortly after murdering Harry's parents as they tried to protect him. This early, unsuccessful attempt to vanquish Harry led to Voldemort's first defeat and the end of the First Wizarding War. One consequence of Lily's protection is that her orphaned son had to be raised by her only remaining blood relative, Petunia Dursley, where he was neither welcomed nor nurtured, but would stay alive, at least until he was seventeen years old. As the only known survivor of the Killing Curse up to that point, Harry was already famous before he arrived at Hogwarts School of Witchcraft and Wizardry.

Severitus — the familyship between Harry and Severus Snape. This ship is used to describe fan fictions that Severus has become Harry's fatherlike figure.

Harry and Ginny meet at King's Cross in September 1991 when Harry makes his first foray into the Wizarding World. They don't spend much time together, mainly as Ginny harbours a monster crush on Harry at which he's a bit embarrassed, until Harry saves her once he, Hermione and Ron realise she's been under Riddle's control. They go on to become friends, each dating other people until Harry becomes infatuated with her in his 6th year and they eventually get together.

Harry and Hermione became friends after defeating a troll together on Halloween 1991. Subsequently, throughout all of the danger Harry faces, Hermione is by his side, never wavering and considers Harry's battle with Voldemort her own. They form a close friendship as they grow older and share a different perspective of being part of the wizarding world, both having grown up as Muggles.

Draco Malfoy became Harry Potter's rival. Draco came from a pure-blood family that believed strongly in blood purity. So, he bullied and insulted those who were muggle-borns and sometimes Gryffindor. He was jealous of Harry Potter being a hero. His ambition was to become like his dad. Voldemort asked Draco to assassinate Dumbledore but he failed to do so. A year later when Harry was brought to Malfoy Manor to be given to the dark lord. Draco was very reluctant to identify him. During the battle of Hogwarts Harry saved Draco life twice. One against Crabbe's Fiendfyre and from a masked death eater. By 2017, Draco gave a curt nod to Harry. In 2017, when their kids become best friends and are in danger, Draco and Harry must work together, becoming allies and develop a better relationship.

Harry and Luna meet in 1995 on the Hogwarts Express. Harry at first finds her odd, but comes to learn that Luna simply is a very honest person, who doesn't necessarily notices her surroundings' reaction to her, or lets it bother her. They have a very intense experience that bonds them when she shows Harry why he and she are they only people who can see Thestrals.

Harry experiences emotional abuse from Snape, which is never put in check although it takes place in a schooling environment. Harry later finds out that Snape hated him because James bullied Snape when they were kids, and also dated the love of Snape's life Lily Evans. Snape dedicated his adult life to protect Harry from Voldemort for Lily. 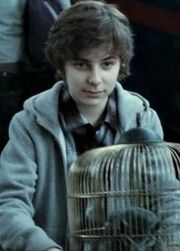 James Sirius Potter born between September 1 2003 and August 31 2004 was the eldest child of Harry and Ginny Potter née Weasley. His godparents, as well as uncle and aunt, are Ron and Hermione Weasley. He has two younger siblings: Albus and Lily. James was named after his paternal grandfather, James Potter, and his father's godfather, Sirius Black.

James is much like his Uncle, Ron Weasley, for his poor timing and knack for interfering with other people's love lives. He also seems to have inherited his sense of humour and love for mischief from his two uncles, Fred and George Weasley, and having a fondness for teasing his siblings and making mischief. He is also very much like his two namesakes, James Potter and Sirius Black, in his mischievous and trouble-making nature. 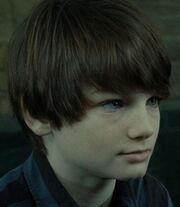 Albus Severus "Al" Potter (born between September 1 2005 and August 31 2006) is a half-blood wizard and the second son of Harry and Ginny Potter (née Weasley). Albus was the middle of three children, born at least a year after his older brother James, and two years before his younger sister Lily. He was named in memory of Albus Dumbledore and Severus Snape.

Albus is a quiet, kind and thoughtful young boy, unlike his loud older brother. He seems to have inherited some of his father's personality, including his irrational and childish fear of being sorted into Slytherin house. It seems that Albus has the closest relationship with his father out of his siblings. He seems to have an interest in his father's fame and past, as it seems that he inherited the paternal line of curiosity. 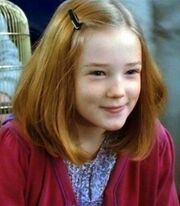 Lily Luna Potter (born between September 1 2007 and August 31 2008) is the youngest child of Harry and Ginny Potter (née Weasley). She had two older brothers; James Sirius and Albus Severus. She was named for her paternal grandmother, and her parents' good friend Luna Lovegood.

Lily seems to have a personality similar to her mother. She is very jealous of her two older brothers when they are leaving for Hogwarts, quite similar to the eagerness and envy Ginny displayed when the last of her brothers went away to school in 1991. She seems to enjoy talking to her family. She and her cousin Hugo, had an "animated discussion" about what house they would be in, suggesting they are really close cousins.