Close Friends/Classmates; Feelings on Maki's side and implied feelings on Kaito's side; Kaito is dead

• Opposites Attract
• Because You Were Nice to Me

Harukaito is the het ship between Kaito Momota and Maki Harukawa from the Danganronpa fandom.

Initially, Maki was annoyed and irritated by Kaito. Her first interaction with him started with her sarcastically pointing out that he claimed he could take down the Monokuma Kubs singlehandedly, even pushing him to attempt this when the Monokuma Kubs appeared in their Exisal form (which terrified Kaito). Kaito also angrily shouted at Maki for blaming Kaede Akamatsu for the conflict between the students, while Maki successfully pushes the blame onto Kaito during the first trial. Despite this, Kaito seems to have taken an interest in Maki following the events of Chapter 1, even nicknaming her "Harumaki" (or "Maki Roll" in the English version) in Chapter 3, much to her displeasure.

In Chapter 2, when Kokichi attempts to make the two of them fight each other when both are considered the only suspects for Ryoma's murder, Kaito denies either of their involvement in the murder and even gets Shuichi to lie with him to give Maki an alibi because he's so positive that she's innocent, despite not having any evidence. Additionally, he drags her and Shuichi Saihara with him to train nightly.

During the investigation of Angie and Tenko's deaths in the 3rd Chapter, a frightened Kaito forcefully pulls Maki into a hug (as she was, coincidentally, the person nearest to him at the time), although this only resulted in her angrily punching him and looking embarrassed after. Later, before they enter the trial, Kaito jokes that Maki "packs a punch".

However, Maki soon starts to show more care for Kaito during Chapter 4. She is angered when Kokichi Oma knocks down Kaito following Gonta's execution, threatening Kokichi repeatedly, and is shocked when Kaito suddenly begins coughing blood. It's shown that Maki had developed romantic feelings for Kaito over the course of the game, but there has been no confirmation that he reciprocated her feelings, even though it is implied, considering how she is the only character he gave a nickname to. He also becomes one of the few people Maki will actually listen to, as shown when she attempts to strangle Kokichi in front of the other students, halting only when Kaito tells her to stop.

In Chapter 5, the two join in the group effort to take down Kokichi, who was believed to be the mastermind at the time. When Maki barges into the hangar during Kokichi and Kaito's fight, she first attempts to torture the former man with a poisoned arrow from a crossbow. She then attempts to kill Kokichi by shooting him with a second arrow, but is stopped when Kaito purposely takes the hit to prevent her from doing so. It is implied that he did it to avoid making her the blackened since if Kokichi got hit by both arrows, he most likely would have died much quicker.

Kaito finishes what she started, and crushes Kokichi in the hydraulic press. This causes Maki to attempt to steer suspicion away from him during the class trial by claiming that she killed him. It isn't a complete lie though, since she doesn't know exactly what happened after the two of them got hit. When Kaito (pretending to be Kokichi) calls Maki "Maki Roll," Kaito's nickname for her that she doesn't let anyone else call her, she gets very angry and yells at him to not call her that. Later on, when Kaito (still pretending to be Kokichi) lies and says that he helped Kaito "as his friend," Maki berates him for making fun of Kaito and calls him a "fucking asshole," which is one of the few times in the game when she swears. Despite how certain she is that Kaito is the victim, she is forced to give up when he confesses to it during the class trial, despite her protests. She even threatens to fight Monokuma and the Kubs, but is stopped by Kaito, who asks her to promise him not to cry, something that Maki couldn't bring herself to follow through on. During their voting time, Maki had no choice but had to vote for Kaito as the culprit and try to fulfill his final request of learning to like herself and putting an end to the killing game. This shows that Kaito had become the only one of Maki's companions who she had any genuine care for since this is the only time in the game when she cries. Kaito is one of the few people Maki truly cares about. Additionally, he is the first person she's ever been attracted to, as evidenced by the line: "... And...I've never...fallen for someone before."

Later, at the beginning of Chapter 6, Maki becomes grateful to Kaito for saving her life, and resolves to end the killing game with the remaining survivors. During the final class trial, when she was told that her feelings for Kaito were all just fabricated by Tsumugi, as well as learning that both of them were fictional characters only serving as entertainment to the outside world, Maki became shocked and felt hopeless. However, she rejects Tsumugi's words, believing that her feelings for Kaito are real.[1]

The ship sailed as a result of a lot of canon ship tease between the two throughout the game, with the most noticeable examples being Kaito coming up with a nickname for Maki, him constantly taking her side, and Maki confirming her feelings for him in Chapter 5. Additionally, this ship appeals to many because of the Opposites Attract trope that the ship fits into.

It is one of the most well written ships in Danganronpa, as well as the most well written one for both characters on Archive on Our Own. It is one of the least problematic ships in Danganronpa since, even if people don't ship it, no one is going out of their way to dislike it or call it toxic, including people who ship Kaito or Maki with other characters and it's one of the most canon ships in the series since one character actually confesses to the other instead of it just being hinted at. 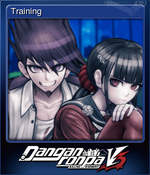 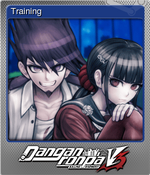 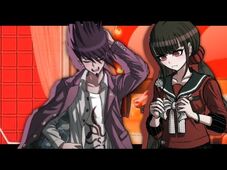