Harumeno is the femslash ship between Himiko Yumeno and Maki Harukawa from the Danganronpa fandom.

The two didn't have too close of a relationship throughout the game, but consider each other friends nonetheless. In Chapter 1, they were together in Kaito's group against the mastermind. In Chapter 5, Himiko started using Kaito's affectionate nickname for Maki, Maki Roll. To Tsumugi's surprise, Maki accepted being called like this by Himiko. At the end of the chapter, the two had a training together, along with Shuichi Saihara and Tsumugi Shirogane. In Chapter 6, they worked together, along with everyone else, to defeat the mastermind in the final Class Trial. Their friendship may have grown, considering they were two of the three only survivors of the killing game.

Himiko and Maki were both distant and disinterested at the beginning of Danganronpa v3, but over time grew to care about their friends. Maki grew to make friends with Kaito Momota and Shuichi Saihara, and eventually contributing to the groups efforts and showing her emotions more. Himiko showed symptoms of depression although it was mostly viewed as her being lazy. After the deaths of Tenko Chabashira and Angie Yonaga, Himiko grew to be better person who cared more for others.

The ship sailed with the girls being two out of three survivors of the New Killing Semester. It became popular among femslash shippers who prefer to pair up characters who are still alive. Some fans, however, don't exclude the other fellow survivor, Shuichi Saihara, and include him as well in a polyship with the two.

Both of them losing someone important to them during the killing game, thus having something to bond over, also helped to fuel the ship. So did their contrasting personalities, with Maki being serious and usually stoic, and Himiko being goofy. Even their contrasting designs helped for some, with Maki wearing red-and-black clothes and Himiko wearing black-and-red clothes.

However, forming mostly from the fact that the two were fellow survivors, the ship is still a minor one, as it's mostly known among those who finished the game. Its popularity is nowhere near as popular as both character's main ships, such as Harukaito for Maki, or Tenmiko for Himiko. In spite of this, the ship still has a decent number of fanfictions and fanarts dedicated to them. 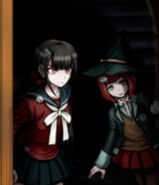