Harvesting Moons is the family ship between Ruby Rose and Qrow Branwen from the RWBY fandom.

Qrow is the honorary uncle of Ruby. Qrow and Ruby both love each other very much and Qrow also acts as a kind of mentor to Ruby at times. Yang mentions that when her and Ruby were quite young, he saved them from a Beowolf attack. He also taught Ruby how to wield Crescent Rose and how to fight. Ruby mentions to Professor Ozpin that she was "complete garbage" before Qrow started training her. She also mentions to Ozpin that she based her weapon off of Qrow's scythe weapon.

When Qrow is first introduced in Volume 3, Ruby is shown to adore Qrow, and is extremely excited to see him. In the final chapter of volume 3, Qrow tells Ruby about the heritage of her silver eyes. Qrow vows to finish Ozpin's work since he might be dead, and then Ruby volunteers to assist him. Qrow accepts, but he tells her that she needs to rest and recover first. Qrow then proceeds to follow Ruby when she sets out on her mission to Haven with the remaining members of Team JNPR.

In Volume 4, Qrow appears at the last second to prevent Tyrian's stinger from striking Ruby, giving her a reassuring smile. Qrow begins to fight Tyrian and Ruby tries to help, but he tells her to stay back for fear of her getting hurt again. However, Ruby does not listen to him and Qrow gets stabbed by Tyrian's stinger. After the battle is over, Ruby shows concern for Qrow when he collapses to the ground from his injury. Later in volume 6, Ruby is shown annoyed when Qrow starts to drown his sorrows in alcohol and ignores her. In chapter 7 though she is shown giving him a hug after he wakes up from his hangover and tells him if he ever needs to talk she's here for him.

Harvesting Moons is a popular family ship within the RWBY fandom. Mainly because of the extremely close familial bond between the two and the fact that they've spent a lot of time together. There is fan theory that Qrow might be Ruby's real biological father. In some fanfictions Qrow being Ruby's real father is point of contention in thise stories. Some other fans have drawn pictures of him with Ruby and Summer. 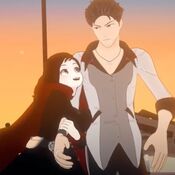 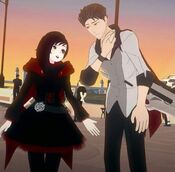 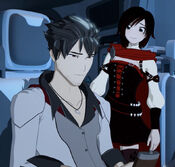