Hawkwitch is the het ship between Clint Barton and Wanda Maximoff from the Marvel Cinematic Universe fandom.

Clint and Wanda were initially enemies; he was a member of the Avengers and a rival of her brother Pietro. From when Wanda and her brother worked under Hydra, who gave them their powers, and later Ultron in order to get back at Clint's friend and ally, Tony Stark. When she attempted to sneak up behind him with a spell, Clint shocked Wanda with one of his arrows, as he had been under someone's mind control before and didn't want to go through something like that again. To which Clint briefly mentions when he shocked Wanda before attending to his allies who Wanda had placed under her spell. After recovering from the shock Wanda received from Clint, she retaliated by infecting the Hulk and making him nearly unstoppable.

After Wanda turned on Ultron and went to the Avengers for help to stop him, he responded by raising Sokovia into the sky. Despite the trouble Wanda and her brother had put Clint and his friends through, he allows her to join them in stopping Ultron. During the battle as Wanda blames herself for what is happening around them, Clint comforts her by telling Wanda that the fault wasn't her, before Clint reassures her the life of a superhero wasn't supposed to be easy. Clint had offered Wanda the chance to sit out the battle as he goes to fetch Pietro from her, along with telling her that she'll become an Avenger once she steps out the door to help them. Once Wanda reflected on what Clint told her, she chooses to join in the battle, as she helps Clint to protect the citizens of Sokovia and evacuate the floating city before it dropped. Wanda's brother had died saving Clint, which saddened the both of them. At the end of the battle Wanda is accepted as a fellow Avenger.

After the Sokovia Accords went into effect, Clint was sent by Steve Rogers to recruit Wanda. They got into a brief fight with Vision, who she was able to non-fatally subdue. As she tells Vision that she is leaving with Clint. They then fought alongside the rest of Captain America's team and were arrested for resisting the Accords, while Steve and Bucky Barnes got away. In which later allowed Steve to brake Clint, Wanda and the others out of the Raft. Once they were freed, the two decided to return back to their loved ones. Because Clint had decided to retire, he and Wanda didn't see one another during the events of Infinity War.

The two friends, however, did reunited after Tony Stark's funeral, where they discussed losing Natasha Romanoff and Vision. This scene highlights how similar they are: people who are very protective of their families and have gone through loss.

Wanda – “How could I let this happen? This is all our fault”
Clint – “Hey, look at me. It's your fault, it's everyone's fault, who cares. Are you up for this?”
— Wanda breaks down after her perceived failure

“It doesn't matter what you did, or what you were. If you go out there, you fight, and you fight to kill. Stay in here, you're good. I'll send your brother to come find you. But if you step out that door, you are an Avenger”
— Clint reassures Wanda[1]

“You were pulling your punches”
— Wanda saves Clint's life[2]

Clint – “You know, I wish there was a way... that I could let her know... that we won. We did it”
Wanda – “She knows. They both do”
— Clint and Wanda discuss Natasha and Vision

Hawkwitch is a semi-rare pairing considering they don't interact much in the various films. Some fanfics involving them have featured Pietro as well, considering his relationship with Clint. There have also been a few fanfics that have the two confiding with one another after Endgame, as they work through their grief together. Many thinks of Clint as Wanda's father figure, which is shown by how much Wanda trusts Clint, noting the way Wanda even leaves Vision to go with Clint in Civil War. They are also pleased by how Clint calms and encourage Wanda in the Avengers: Ultron. Some fans also theorize that Wanda is close with Barton family. 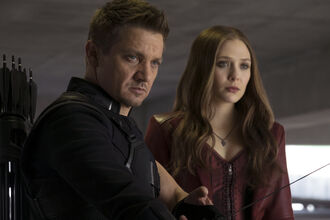