• A Shared Suffering — they bond over this

Sara – “I thought this was all over; the bloodlust, the fight for my soul - all the crap that I've had to endure”
John – “Well there's always more crap to endure. Take it from one who's damned his own soul to hell”

Hellcanary is the het ship between Constantine and Sara from the Legends of Tomorrow fandom.

When Laurel brings Sara back from the dead in 2015, she's changed and out for blood from the one who fired the arrows — Thea. Oliver calls in his favor with Constantine to retrieve Sara's soul from the depths of her consciousness, bringing Laurel with him as Constantine performs the ritual taking them into Sara's subconscious. Constantine fights off the manifestations of her soul's prison, while Oliver and Laurel retrieve her soul. They succeed and return to the Arrowcave. Sara opens her eyes and has returned fully herself. Laurel and Quentin embrace their beloved Sara as Constantine looks on smiling, happy to have helped.[1]

“Sara Lance. What the bloody hell have you gotten yourself into this time[2]”

In 2017, Sara returns to the Waverider after dropping off. It’s completely dark and she doesn’t notice John till he draws her attention. Sara asks why he’s here, John replies that he’s here to collect on Sara’s debt for returning her soul. Sara says his timing is awful, but John says it won’t take long. He quickly explains that he’s trying to exorcise a demon from a girl, specifically one that knows Sara's name.[3] Sara introduces Constantine to the team. Talking with Nate and Sara, Constantine learns that Sara recently visited the spirit world and that the demon is named Mallus. John wants to trek on by his lonesome and smugly suggests the Legends are out of their league, but Sara insists on joining. As they arrive, Sara knocks out two orderlies, which Constantine enjoys. They bring Emily to an empty room to exercise her and learn that she is actually Nora Darhk.

John – “What about you? Have you forgiven yourself for your sins?”
Sara – “I don't deserve forgiveness[2]”

Leo, Sara and Constantine stand by as John starts the exorcism but Mallus can foil John's magic easily, knocks them out and draws a sigil that sends them back to January 1969. They're stuck there and Sara comes up with a plan to write a message on a painting for the Legends to find in the present. Mallus gets in Sara's head and messes with her, but John catches her. He tells her it's her time in the spirit world that's giving Mallus access and that she has to fight him off. Leo goes off to write the note and is taken, while Sara is freaking out over Mallus's control and asks John to help her. They manage to repel Mallus and John confides in Sara that he damned his own soul to hell in an attempt to rescue a girl named Astra in Newcastle. Sara says he should forgive himself, but John reverts the notion to Sara, who doesn't think it's possible. In their shared peril, Sara and John find an attraction, start making out and have sex.

Afterward, they get to Leo just in time to save him from a lobotomy. While untying Leo, Sara suggests they use her as a vessel to summon Mallus, but John's hesitant. Sara's nonplussed as he intimated that she would be strong enough to withstand demonic possession and John admits it was a pick-up line. Sara balks, stating that she was seducing him, not the other way around and they start bickering. Sara decides to try it despite John's doubts and manages to write out the symbol while possessed. John and Leo grab onto Sara as the symbol's activated and return to Star City 2017. Constantine's impressed, but Sara's not moving and John freaks out, telling her to come back and prove him wrong. Sara jokes, revealing that she was paying him back for his arrogance earlier and John smiles. Back on the Waverider he casts a protective spell on Sara, states that this was an odd experience even for him and sets off. Sara catches up with John and thanks him for helping her. John takes it as code for hooking up and that Sara is looking for reassurance, which Sara realizes and catches John off guard by thanking him for the sex, too. John sets up a fail-safe with Ray regarding Sara's, in John's mind, imminent succumbing to the demon.[2]

Sara – “You said I was strong enough to hold Mallus off”
Constantine – “Yeah, well, I was trying to seduce you”
Sara – “Oh please, I seduced you[2]”

Although not the ship fans expected to become canon after the announcement that Constantine would be on Legends, many enjoyed their hook-up. More ship it as a hook up like the canon, and prefer interactions as friends.

On AO3, Hellcanary is the tenth most written ship for Constantine.

Miss Me, Kiss Me, Love Me 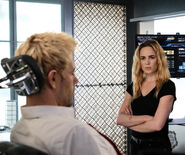 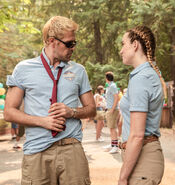 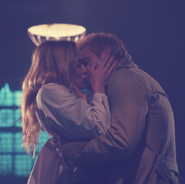