Helsa is the het ship between Elsa and Hans from the Frozen and Once Upon A Time fandoms.

Hans is one of the visiting royals who attend Elsa's coronation. Even though he witnesses Elsa's crowning with the other nobles, Hans and Elsa didn't properly meet until he and her younger sister Anna asked the newly crowned Queen to bless their married. Elsa, however, didn't want Anna to marry Hans as they had just met and wasn't very fund of the idea about having Hans' family coming and staying in Arendelle, as it would make it much harder for her to hide her magic. After Elsa told the two that her design is final and was able to the leave the party she wants to put an end to, Hans tries to ask Elsa if they could talk but she wouldn't have, due to her fears. When Elsa accidently revealed her ice magic to Hans and the rest of the visiting nobles, along with all of Arendelle's people, Hans joins Anna as they try to chase after Elsa, but she got away before they could reach her, while Elsa's uncontrolled magic accidently created an eternal winter upon the kingdom.

While Elsa starts anew life within her icy palace in the North Mountain, Hans looks after her kingdom's people on her sister's behalf until Anna returns with Elsa. Once Hans saw that Anna's horse that returned without his rider or the Queen, he decides to take a small party to Elsa's Ice Palace in order to find both of the young royals and bring them back to Arendelle. When Hans and the volunteered men reached the palace, he gave orders that no harm must fall upon Elsa, or her sister, but the Duke's bodyguards had their own orders. Due to Marshmallow guarding the palace of his terrified creator, Hans wasn't able to stop the two from attacking Elsa until he was able to defeat the giant snowman-like monster and dash into the palace with the other men. As Hans saw Elsa able to finish off the Duke's bodyguards, he manages to stop her from doing so by telling Elsa to "not become the monster they think" she is, knowing that Hans is right Elsa stops and becomes horrified at that she tried to do. Since Elsa's guard was down one of the Duke's men tried to kill her with one of his arrows, but Hans notices this and manages to him from doing so, but he wasn't able to stop the arrow from being shot from the crossbow as it causes the ice chandelier to fall where it nearly crushes Elsa. Who was knocked unconcise when she got herself out the way on time, by shear luck. To prevent Elsa from being killed out of fear, Hans brings the unconcise Queen back to Arendelle where she was placed in the castle's dungeon.

Shortly after Elsa woke up and became aware of her current predicament, along with what her lack of control has done to Arendelle, Hans enters her cells. Elsa asks him why he brought her there, as she views herself as a danger to the kingdom and its people, to which Hans replies that he wanted to prevent her death before he asks Elsa to end the enteral winter and bring back summer. Elsa wanted to undo her mistake but didn't know how to and told Hans so with pain in her eyes and voice, before she asked him to let her go before anymore harms falls upon the kingdom. Seeing that Elsa won't be able to help them, he tells her that he'll see what he could do before he leaves her cell; while Elsa's hands began to freeze her shackled hands. In truth Hans has no intention of helping Elsa, as he explains to Anna that he has a desire to become King and decided to gain Arendelle's throne through Anna since he knew that no one was going to get through to Elsa, along with planning to stage an accident for Elsa once he and Anna were married. While Elsa's actions and the fear she has caused provided him with an opportunity to become Arendelle's King, without the need to marry either sister by leaving Anna to die while he goes to kill Elsa in hopes that it would bring summer back. After Hans lied to the diamantes about him becoming Anna's husband before her "death" and that he wishes to ravage his "wife" by killing the one who froze her heart, Elsa was able to make her escape before Hans and the guards entered the cell.

As Elsa tries to runaway from Arendelle, again, Hans manages to find her in the harsh blizzard while acting as a "concerned friend" to her. Elsa begs Hans to look after Anna on her behalf, to which has Hans telling Elsa that Anna is gone because of her. Believing that her worst fear have come true, while her distressed emotion caused the blizzard to "stop" as she falls to her knees, Hans takes advantage of this as he prepares himself to slay Elsa. Anna however stopped Hans before he could do to, and after Elsa used love to end the winter she created Hans was sent back to the Southern Isles. So he could face punishment for his crimes towards Elsa, her family and kingdom.

When Elsa blow the horn as part of Anna's birthday celebration, while coming down with a cold, Elsa sneezing while blowing the horn at the same time had caused a large snow ball to make its way all the way from Arendelle to the Southern Isles, where it lands on top of Hans. While mugging out the horses, as his punishment for what he tried to do to Elsa and her family.

When Elsa knew that she has to make her way to the Enchanted Forest her father had told her of, Anna mentions Hans among the list of things she faced three years ago. Shortly after finally Elsa reaches Ahtohallan she uses her powers to destroy the frozen water memory figure of Hans, from a moment when he met Anna, without a seconded thought. Due to Elsa and Hans parting on bad terms with one another.

The scouts that Elsa had send out to find Anna had came across Hans and his army making their way to Arendelle, and alter Elsa of this.

Because Hans had originally planned to win Elsa's heart to gain her kingdom's throne, before making Anna as his more earlier mark, along with Anna ending up with Kristoff, many fans had presume that Hans would of moved onto Elsa before his true colors were revealed to the audience. Despite Hans being the main antagonist of Frozen, it hasn't stop fans from shipping Elsa and Hans together, and have even shipped Helsa beside Kristanna and, at times with Eugunzel in the Frozen Tangled crossover fandom. Helsa and Hanna could even be due to fans who enjoy shipping Disney Princesses and Heroes with the Villains of their Disney films, which gives the two ships, as well as Hanna and Hansoff, support in the Disney Frozen fandom.

The ship's support grew once the two characters and the world of Frozen was added to the Once Upon A Time series, which adds the Frozen ship to its OUAT fandom. After Frozen II came out, a small group of fans began to have Elsa coming across a redeemed Hans in the Enchanted Forest, and helps him to find peace. Along with there being fans who ship Hans with Elsa's evil self, from one of the earlier versions of Frozen that has Evil Elsa as the villain. Fans commonly add this idea in their fanart during Halloween, or have the two swap cloths for a laugh.

As part of the Rise of the Brave Tangled Frozen Dragons crossover fandom, and a few of its sub-fandoms, the two are often featured in AU scenarios. One example of this is a Zootopia AU where Elsa and Hans are cast as human-animal hybrid versions of Judy Hopps and Nick Wilde. There have even been AUs where Hans is given power over fire, which is Elsa's opponent element and there is a common trophy that ships couples of ice and fire together. Water is also seen as the opponent element to fire, and this has got a few fans to portray them as benders of those two elements from the world of the Avatar series. 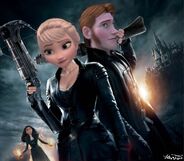 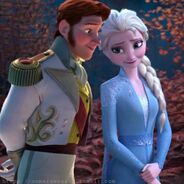 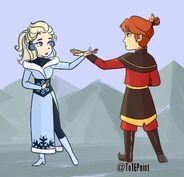 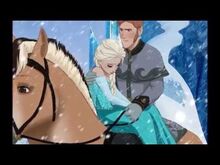 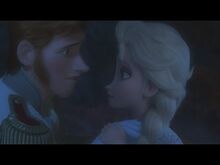 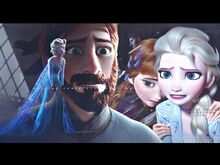 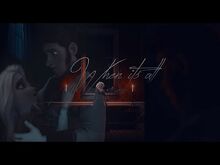 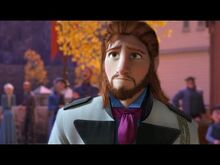 Elsa & Hans - Even If It Hurts 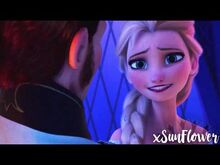 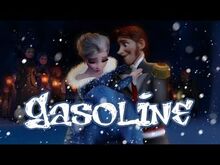 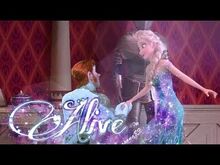