Frozen
How to Train Your Dragon

Hiccelsa is the het ship between Elsa and Hiccup from the Frozen and How to Train Your Dragon fandoms.

Elsa and Hiccup never meet due to Hiccup being a DreamWorks character, while Elsa is a Disney character.

The HTTYD/Frozen pairing is one of the het ships of the Rise of the Brave Tangled Frozen Dragons crossover fandom and its sup-fandoms. While not very popular, it started gaining some fans after the release of How to Train Your Dragon 2. The pairing is less popular on AO3, but does have a reasonable size fanbases on YouTube, DeviantArt and Tumblr. After the third HTTYD film and the Frozen sequel came out, the ship's support grew as fans began to feature the most recent versions of Hiccup and Elsa in their fanworks.

As part of the Rise of the Brave Tangled Frozen Dragons fandom, the ship is commonly featured in AU scenarios. One example is a WALL-E AU with Hiccup as WALL-E and Elsa as EVE. There have also been times when they are featured in a Viking AU, where Elsa is the chief of a viking tribe on a cold island, showing even more parallels to Hiccup. A few manips of Viking Elsa commonly has her wearing Astrid's clothes, or something similar to them beside Hiccup. There have even been fans who have portrayed Hiccup as a male, fire wielding version of Elsa for a Frozen AU. Along with there being a few fans who have Hiccup in a Once Upon A Time AU, where he meets and befriends Elsa's Once counterpart, or have pieced a screenshot image of OUAT Elsa with a photo of a cosplay Hiccup; in order to create live-action manip fanart of them.

Their first meeting varies by fanon, but some ideas involve Hiccup and Toothless meeting Elsa on one of their travels, Hiccup attending Elsa's coronation or at a meeting for monarchs. Their first meeting would be intimidating, with Elsa feeling scared of the two partially because she fears her ice powers would hurt them, and Hiccup mistaking her for the Snow Queen. After clearing the misunderstanding, Hiccup would try to bond with her, which Elsa would eventually accept. Some of the bonding could also happen through Toothless, who could bond with Elsa due to understanding the isolation she went through. When close enough, Hiccup would teach Elsa how to ride a dragon. In a relationship, they are often portrayed having a playful side with occasional snowball fights, but also appear more serious in public due to their high statuses.

There have also been times when the ship has Elsa as the Light Fury's rider or human trusting friend, so they can ship Hiccelsa beside NightLight. Since both Hiccup and Toothless have green eyes, while Elsa and the unnamed Light Fury's eyes are blue. Just as there have been times when fans have Elsa take Astrid's place so they could have her as Nuffink's mother; since some OCs of Hiccup and Elsa's child has blond hair and green eyes. Before How to Train Your Dragon 3: The Hidden World and the reveal of both the female Light Fury and her kind, however, there had been fans who have made Elsa the rider of a white scaled Night Fury to serve as Toothless's mate beside Hiccup and Elsa.

Frozen Dragon: The Fire within the Frozen Heart
Hiccup and Elsa

Hiccelsa on the Rise of the Brave Tangled Dragons Wiki 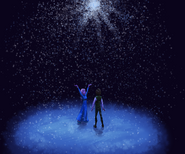 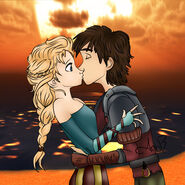 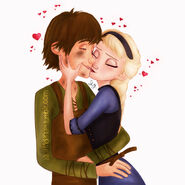 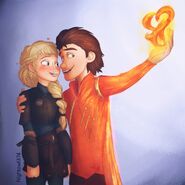 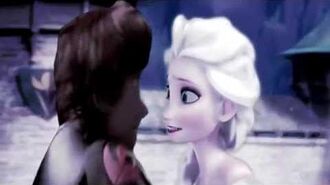 Elsa x Hiccup - Crying out for me 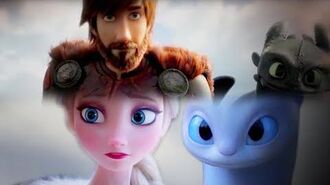