Higuel is the slash ship between Hiro and Miguel from the Big Hero 6 and Coco fandom.

As Hiro and Miguel are from different series, they have never met in canon. Even though a few Disney crossover video games could have them cross paths with each other or get them added in the same team, by the player's choice.

Their other common link is the color scheme of their blue and red clothes, even though they are in a different order from each other. As Hiro has a dark blue hoodie and a red shirt, while Miguel has a red hoodie and blue gene trousers. Along with both of them having brown colored eyes and a dark shaded hair color. They also have an non-human friend, Baymax the robotic nurse that was built by Hiro's older brother, and Dante the dog who turns out to be a Alebrije. The two young boys have also lost family members they were very close to.

Higuel is a popular Disney slash ship between the two teenage characters. It is rather popular in Mexico, which is why most of the fanfiction work of the pairing is in Spanish. While the exact origins of the ship is bit of a mystery, it could simply be due to fans who enjoy Disney crossover ships. As well as the fact that both Hiro and Miguel are young Disney characters, who have a few small things in common that can have the two get along with each other.

Some fans switch the their Mexican and (half) Japanese cultures with each other's for fun, along with featuring both of them as girl or older versions of themselves, for the same fun reason. The setting of the ship is commonly set between Santa Cecilia and San Fransokyo, when they visit either of their home town/city and teach each other their main music and robotic skills. There have even been times when fans have Miguel bring Hiro into the Land of the Dead, in hopes that he'll be able to help Hiro see Tadashi again. One of the AU's where the two are paired together is a Corpse Bride AU with Hiro as Victor van Dort and (skeleton) Miguel as a male Emily. There have also been times when the two boys have been cast as Luz x Amity from The Owl House.

After kkopimint had set up a contest for the LGBTQ+ community, by drawing Hiro and Miguel with the Underdogs from Luca in their own styles, it had inspired fans to feature Higuel beside Luberto. These drawings can be found on Instagram. Along with the Pixar ship inspiring people to support Miguel.

While AO3 only has 58 fanfics, but has a reasonable size fanbase on Tumblr and DeviantArt.

Hiroguel on the Rise of the Brave Tangled Dragons Wiki 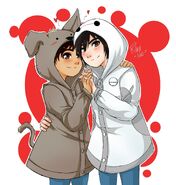 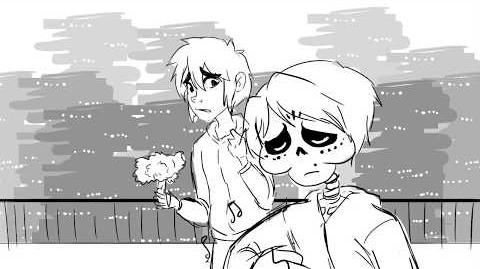