Hijirisano is the het ship between Takumi Hijirihara and Misaki Asano from the Danganronpa fandom.

Misaki has a difficult time trying to understand Takumi and his odd behaviors, and often gets frustrated with him as a result. However, she continues to make an effort to understand him, even if she herself finds his habits and personality to be sloppy. Her concern for him is shown when she takes Takumi's invitation to hide underneath the sink with him and waiting in his hospital room for him to wake up.

Misaki has enormous difficulty believing that Takumi is the Killer Killer at first, having seen him in an entirely different light during all the time she spent with him. However, she has no other choice but accept the reality of things as she witnessed Takumi's Killer Killer persona in action as he faced and murdered the numerous Mukuro Ikusaba lookalikes. She was sad at first knowing that his true identity as the Killer Killer. However, Misaki understands that he turned himself as a serial killer who kills serial killers after he experienced a deadly experience such as Giboura Massacre. Eventually, after Shūji planted a bomb choker on her neck, Misaki begged Takumi to kill her, exclaiming that by killing her, he'll get the 'Passionate Killing' he yearned for. Takumi then 'severed' her head to discard the choker before her head is reconnected by unknown means. It is revealed that Takumi's slice was actually so clean that the cells holding together her neck fell directly back into place and reconnected (a Japanese swordplay trope).

Days later, Misaki met Takumi again in the similar manner to when they first met. Takumi then hugged her and revealed that he still intended to keep his promise to kill her by use of his "Super Lovers Suicide" technique. Misaki complies to the arrangement, implying that both of them had romantic feelings for each other, though Takumi's description of the technique suggests he simply intends to live a long and happy life with Misaki until they both die of natural causes. They disappear from society and leave a note behind describing their intentions.

The ship sailed due to its status as canon in the Danganronpa Gaiden: Killer Killer manga. Initially shown as Misaki suspecting Takumi has feelings for her, growing more attracted to him, Takumi shown gradually attracted to her as well throughout the manga, and the ending in which the two end up romantically together cemented its status as canon and thus their popularity as well.

This ship is rather uncommon in the fandom due to originating from a more obscure spin-off manga, Danganronpa Gaiden: Killer Killer. However, among those who have read the manga, the ship is common and remains mostly unrivalled. As a result of its canon development, the ship became the most popular shipping choice for both characters included. In spite of this, as a result of originating from a side story, it still gets a small number of fanfictions and fan arts dedicated to it, especially for a canon ship.

Its main ship rival is Hijirigawa. While the latter might appeal to some for its LGBT status, Fujigawa himself is a rather unpopular character for his unhealthy obsession with Hijirihara and his goal to kill all humanity. This causes Hijirisano to win in popularity for most fans familiar with the story.

The title of the act they did at the end of the manga, "lovers' suicide," is sometimes used as a nickname for the relationship of another obscure canon Danganronpa couple, one between Tarō Kurosaki and Tsubasa Kamii from the Student Council. 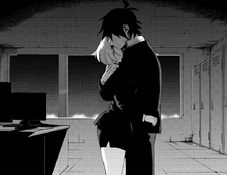