HinaNoya is the slash ship between Shōyō Hinata and Yū Nishinoya from the Haikyu!! fandom.

Hinata and Nishinoya first met when Nishinoya rushed into the gym and perfectly received one of Kageyama's serves. Hinata approaches Nishinoya and notices that the latter is shorter, which annoys Nishinoya. Hinata apologizes and asks how tall Nishinoya is, to which he responds 159 centimeters. Hinata, shocked from Nishinoya's answer, cries out that it was the first time he had looked down at someone since he started high school club activities. Nishinoya gets more agitated, misunderstanding and thinking Hinata was weeping in joy and looking down at him.

Tanaka, Daichi, and Sugawara then arrive at the gym and introduce Hinata and Kageyama to Nishinoya. After talking with various people, Nishinoya asks the third years about Asahi. After learning Asahi had not come back, he insults him, to Hinata's surprise. Nishinoya then leaves the gym, claiming that if Asahi wouldn't return, neither would he.

Hinata runs after a cold Nishinoya and asks him if he's a libero. Nishinoya asks Hinata why he thought he was a libero. Nishinoya follows this up by asking if it was because he was short. Hinata denies and says it's because Nishinoya was a receiver and the libero position was for good receivers. Hinata then mentioned that Daichi called Nishinoya the Guardian God. Nishinoya suddenly gets flustered after hearing the compliment. Hinata says that he himself is still bad at receiving and asks Nishinoya to teach him how. While doing so, Hinata calls Nishinoya senpai, which shocks Nishinoya. Nishinoya grabs Hinata's shoulder and tells Hinata that he will buy him ice cream after practice because he was Hinata's senpai. Although, Nishinoya state that he will not be coming back to the volleyball club, only teaching Hinata.

Later, Nishinoya is seen teaching Hinata and Tsukishima to receive, using many onomatopoeias to explain. This confuses the two. Afterwards, Hinata asks Nishinoya who Asahi was. Nishinoya tells Hinata that Asahi is the ace, to which Hinata replies that he wants to be the ace. Nishinoya comments on Hinata's height, which discourages him. But Nishinoya grabs Hinata's shoulder and encourages him to become the ace. Nishinoya tells Hinata about being libero, which inspires him and causes him to call Nishinoya awesome. This, once again, flusters Nishinoya who says he'll buy Hinata two flavors of ice cream.

Nishinoya asks Hinata what his specialty is, since there must be something he's good at. Hinata shamefully admits he's a decoy and that it didn't sound as flashy as ace or Guardian God. Nishinoya encourages Hinata and reminds him how important his position is, although Hinata still appears sad. After Kageyama and Hinata meet Asahi, Nishinoya does a rolling receive in the gym he named "Rolling Thunder." While Yamaguchi and Tsukishima laugh at Nishinoya, Hinata is eager to ask Nishinoya to teach him how to do the Rolling Thunder.

After learning Karasuno will be in a practice match against Nekoma High at the end of the Golden Week Training Camp, Nishinoya tells Daichi that he won't be playing. He compliments Hinata as well as the other first years, but still refuses to play since it would be proof they could do things without Asahi. Right after Daichi tells Nishinoya to at least come to the training camp, Hinata excitedly runs up to Nishinoya and asks him to show him the Rolling Thunder again.

“Shoyo is a good guy. The first years are interesting and a force to be reckoned with. I feel this team is going in the right direction now.”
— Nishinoya in Season 1, Episode 8

HinaNoya isn't very popular in it's fandom and is overshadowed by ships such as KageHina, KenHina, AsaNoya, and TanaNoya. While it is considered a rarepair, HinaNoya does have its shippers. Some of the shippers started shipping it after seeing their dynamic when Nishinoya was introduced. Fanworks are often just general fluff, although sometimes fanworks have the two showing their volleyball skills. The ship currently has 228+ works on AO3 while the friendship currently has 75+. 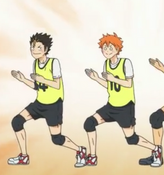 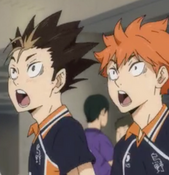 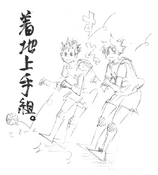 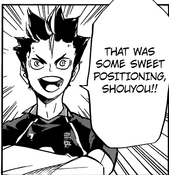