HinaYachi is the het ship between Shōyō Hinata and Hitoka Yachi from the Haikyu!! fandom.

When Kiyoko first brings Yachi to the Karasuno Boy's Volleyball Team, Hinata is one of the first people who greets and tries to befriend her. She gets startled by his outgoing and loud demeanor at first, but Yachi soon realizes that he is no threat. Later, Shoyo and Tobio confronts Hitoka about having her tutor them, after Tsukishima provides not much help to them. Yachi panics through the conversation, wondering if they had told her their names and she had forgotten and mistakenly assuming Hinata wasn't a player due to his size. Despite her lack of knowledge on volleyball, and her nervousness throughout the entire conversation, Hinata is unphased and continues to talk to her.

He continues to be tutored by her, all the while trying to convince Hitoka to become the team's manager. After several study sessions with Yachi, he and Kageyama finally meet her mother, Madoka. The boys see from the way this mother and daughter interacted that Hitoka clearly felt inferior to her, and wasn't sure how to portray her emotions to her mom. After Hinata and Kageyama leaves, the former tells the latter about Yachi being hesistant to join the team. Tobio tells Shoyo to just stay out of it, and ultimately, that it was Hitoka's descion. Hinata, having a fairly good guess on how Yachi actually feels, tells Kageyama that it was no wonder he didn't have a girlfriend.

He then realizes he left one of his textbooks at Yachi's house, and runs back to go get it. After Yachi hands him the book, she asks him a question. During their conversation, she tells him about her insecurities with joining the team, scared she'll mess up. Hinata then tells her about all the times he messed up but things still turned out alright, namely the time he knocked the vice principal's wig off his head. Yachi then says that she does in fact wants to join the team, but still feels held back by something. Hinata tells Yachi that it's her relationship with her mother that's holding her back.

The two of them run to the train station where Hitoka's mom would be heading to her work from. On the way, Yachi relates the situation to one that would happen in a shojo manga, except that the guy didn't normally run as fast. They make it to the train station, and Hitoka yells to her mom that she is going to be the Karasuno Boy's Volleyball Team Manager. Her mother walks away, clearly moved form the experience. After Hinata congradulates Yachi on her new found confidence, she asks to take a picture of him doing a spike. She then uses the photo in a poster to advertise raising money for the volleyball camp Karasuno's team wants to attend.

Later on, while helping Hinata and Kageyama train, she witnesses them getting into a fight and quickly grabs Tanaka to nullify the situation. As she walks home with Hinata, she cries having seen the deterioration of his relationship with Tobio. During the training camp, she works extra hard to try to help the boys with their special move and help them repair their friendship. After she sees their move work, she is extatic.

This is considered to be rarepair in the fandom. However, it is usually one of the first rarepairs listed when fandom members thinking of it. It is overshadowed and rivaled by the KageHina and KiyoYachi ships. Despite that fact, HinaYachi has a decent amount of fanwork, with 294 works on AO3. It has a large amount of fanworks on Tumblr as well. 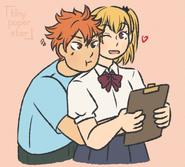