Hinadam is the slash ship between Hajime Hinata and Gundham Tanaka from the Danganronpa fandom.

Gundham regards Hajime with mildly degrading regard most of the time, as he does with all his other classmates. He refers to them as 'mere humans / fiends,' and often makes light jabs at them all. This treatment is not excessive to Hajime.

However, Gundham, despite his pride, appears able to easily concede when he feels Hajime has bested him. During his rebuttal shutdown in the third chapter, Gundham stops arguing quietly as soon as Hajime presents the proper evidence to prove him wrong. Furthermore, during his final argument in chapter four, Gundham easily admits his crimes as the blackened once Hinata properly corners him, going so far as to applaud the other's effort and compliment his ability to best him.

Their first meeting inspires confusion within Hajime, who needs some help from Nagito Komaeda to discern some of Gundham's metaphors. Throughout the game, Hajime seems to think of Gundham as very strange. When initiating freetime events, Tanaka receives a personalized textbox: 'Can I really hang out with someone like Gundham?'

During the second chapter of the game, Gundham is implied to have tried to follow Hajime and the rest of the students, though when discovered, he denies it and leaves. Hajime then states to himself that if Gundham wished to come along, he could have just said so.

During the fourth chapter of the game, Gundham commits the murder of Nekomaru Nidai. Hajime, being the protagonist, is responsible for convicting Gundham of his crime. Once he is outed as the blackened, Gundham applauds Hajime for doing 'quite well' for a human. He does not argue against his conviction, but denies his sacrificial actions. Hajime is one of the classmates that chooses to take Gundham's final words and actions to heart, claiming that they need to live on for Gundham's honor, and to remember his final words about holding on to life.

During Gundham's free time events, the two grow into close friends. Gundham seems surprised to discover that Hajime does not possess any hidden abilities, the ability to conjure a familiar, or a true name (likely a reference to his alter ego, Izuru Kamakura.) Throughout their events together, Gundham opens up to Hajime, sharing his backstory, top-secret breeding techniques and implications at his insecurities. Through these conversations, Hajime grows to better understand Gundham and the way he acts. Finally, Hajime proposes his offer of friendship to Gundham. At first, the breeder is angered by this, assuming that it is some kind of cruel trick. However, when Hajime clarifies he has no alternate bad intentions, Gundham expresses surprise that a human like him was capable of having no ill will. At the conclusion of these events, Gundham indirectly accepts Hajime's friendship and offers a him a handshake, an action only deserving of who Gundham refers to as 'the singularity.' With the handshake, Gundham informs that Hajime is no longer allowed to die without the exclusive permission of Gundham alone. Hajime expresses that he wished to return this, but feared that Gundham would grow angry if he did so. Their handshake grows into a battle of endurance, but Hajime expresses that it had been a long time since he felt this happy being acknowledged by someone.

During Tanaka's Island Mode events, the two grow closer still. During Gundham's ending, Tanaka refers to Hajime as his 'soul's chosen companion,' and expressing his wishes to spend the rest of his life alone with both his Four Dark Devas of Destruction and Hajime. He explains that Hajime is to fully assist him with his 'magical demon beast synthesis,' and officially declares the protagonist his friend. The exchange ends with the duo walking off hand-in-hand.

In one of the non-canon manga installations, Super Danganronpa 2: Goodbye Despair Academy Comic Anthology (Vol. 1), Hajime and Gundham share a few moments in the second chapter, 'Me and Tanaka's Dark School Trip.' It is an alternate reality based around Hajime's introduction to Gundham in chapter one, where instead of backing away, Hajime attempts to communicate with him in a language Gundham understands and respects. Describing himself as 'the wearer of the boundary between black and white,' Hajime causes Gundham to think he has a special bond with cattle. Touching the cow on the ranch at the farm (despite it being Hajime's first time ever doing so,) Gundham is impressed by the wicked aura that Hinata shares with the animal. Hajime then realizes he feels a special connection to Tanaka, and the two shake hands as sworn friends. Later, when Monokuma announces the Killing School Trip, Gundham and Hajime attempt to stand against him as friends, sending the Devas forward to defeat Monokuma and seemingly saving everyone on the island. However, it was too good to be true, and Monokuma returned after all in order to start the killing game.

Gundham – “I already told you... All I want is silence and indifference”
Kazuichi – “Hey Hajime...! It's all good, so let's hurry up and go...!”
Hajime (in thoughts) – “He looks so lonely... If you want to hang out, just say so.”
—Hajime recognizes Gundham's true reason for following them.

“Kehehe... splendid! Fuhahahaha! That was splendid! For a mere human, you did quite well!”
— Gundham praising Hajime for convicting him.

Hajime – “...I agree. But I don't plan to betray you at all.”
Gundham – “Hmph. Such exaggerations coming from a mere human like you. However...that's a nice line.”
— Hajime assuring Gundham that he has no plan to betray him.

Hajime – “As long as you're my friend... I have no desire to take anything away from you and try to force you to change.”
Gundham – “... It seems that... I completely misread you... I never expected a human like you to contain a singularity...”
Hajime (in thoughts) – “Hm? Have I been promoted from a mere human?”
—Gundham realizing Hajime is a genuine friend.

“With this... the contract is complete. I will not allow you to die without my permission.”
— Hajime completing Gundham's contract with a handshake.

“Whaaat!? You fiend, did you read my mind!? Kehehe... Interesting... Then try to read the minds of my Four Dark Devas of Destruction! You should be able to do it! If you want, I can even teach you how!”
— Gundham, impressed by Hajime, becoming more open with him.

“Additionally, I learned several things by being in close proximity to you fiends. By encountering a singularity like you, my destiny has changed drastically. Hajime, you of all people should be able to tell just how my soul has been transformed. After all, you are my soul's chosen companion!”
— Gundham dubbing Hajime his 'soul's chosen companion.'

Hajime – “Yeah, yeah. So what is the great and powerful Gundham going to do now? Are you plotting world domination?”
Gundham – “Hmph, I have no interest in something so trivial. The fools running the human world can stay in power. I just want to live a quiet life with my Four Dark Devas of Destruction, their families, and... with you.”
Hajime – “Gundham...”
Gundham – “Wh-What's with that dumbfounded face! From now on, you will fully assist me with my magical beast synthesis! Until this life ends, you must stay by my side, as my slave/manservant/sacrifice/housekeeper/friend!”
— Gundham telling Hajime what he plans to do once they're free from the island.

The ship sailed as a result of Gundham and Hajime's display of friendship during their free time events. Hajime, during those events, effectively became one of Gundham's closest friends. The Island Mode they shared only added more fuel to this ship when Gundham referred to Hajime as his 'soul's chosen companion,' and the two were implied to spend their lives together at the end of the program.

This ship is a rival for those like Soudam and Sondam. However, some shippers of Hinadam still appreciate Gundham's relationship with Sonia Nevermind, thus creating Sondhime.

A panel from the anthology

A panel from the anthology 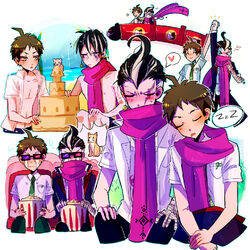 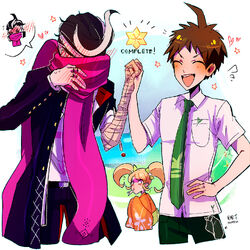 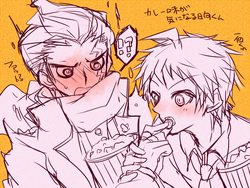 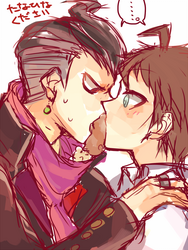