• Because You Were Nice to Me — Mikan has extremely low self-esteem as a result of severe bullying and harassment. During her Free Time Events, Hajime expresses sympathy for Mikan, and goes out of his way to make sure that she knows the others care for her.
• Ship Tease — there are two scenes in the game where Mikan climbs into bed with Hajime and cuddles with him in a highly suggestive manner.

Hinamiki is the het ship between Hajime Hinata and Mikan Tsumiki from the Danganronpa fandom.

Mikan seems to have formed a liking for Hajime as he is the first person (on the island) to approach and speak to her, not wishing to bully her but only to have a casual conversation. Though nervous and stuttering at first, she gradually lightens up, even asking him to come back and talk to her again.

Hajime is also the first person she admits to that she is glad that there is nobody to stomp on her and abuse her on the island. Mikan also chases Hajime around with a syringe a few times, wanting to give him an injection, and is found sleeping on him several times in Chapter 3. In the third trial, she uses him to give herself an alibi in the morning when they first discover the corpse.

In Chapter 3, when Hajime accuses Mikan of killing Ibuki Mioda and Hiyoko Saionji, she becomes furious, and obviously denies this. This act upsets Hajime, who doesn't want to believe she's the culprit as much the others, who are in shock at his accusation. Despite this, Hajime reluctantly shows evidence that points to her being the murderer. He tells Mikan to give it up, so he can still believe in her in the end. But Mikan's personality has already changed, and she is executed, leaving nothing but her malice for Hajime and the others.

In her free-time events, when Mikan explains her reasons for becoming a nurse, Hajime is disturbed and is afraid to show any signs of weakness or sickness around her. However, he also feels bad for her and believes that she is not to be blamed for the way she is now.

During the events of Island Mode, Mikan is very happy to be Hajime's friend and has a clear romantic interest in him. In her ending, she is even ready to go as far as to cripple him in some way so that they can be together forever. However, Hajime proposes to her instead, causing her to declare that she would become his own private nurse and take care of him forever.

The ship sailed as a result of numerous ship tease on Mikan's side, such as the scenes where she falls asleep on top of Hajime. Their Free Time Events and Island Mode events further fueled the ship, with Hajime even proposing to Mikan in the ending of Mikan's Island Mode.

The ship is quite popular, even though both characters had several other popular ships in their debut season. Danganronpa 3 developing some of their other ships decreased the popularity of this one, although it still has a large number of shippers.

Fan art often shows Mikan taking care of Hajime as his personal nurse, which is a reference to her promise to him in their Island Mode ending; or a wedding between the two, referencing Hinata's proposal to Tsumiki from the same event. 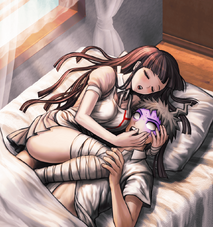 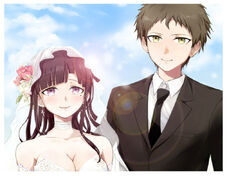 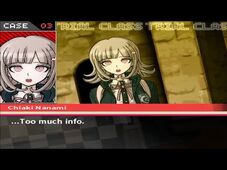