Hinanami is the het ship between Chiaki Nanami and Hajime Hinata from the Danganronpa fandom.

Chiaki was Hajime's closest friend in Hope's Peak Academy. One of the reasons he participated in the Izuru Kamukura Project was to be worthy of her.

The two first met at a water fountain near the school, when Chiaki bumped into Hajime while playing a game. Since then, the two continued to meet with each other and play games after school at the same place.

Chiaki once comforted Hajime after he felt upset about not having a talent. She told him that there's more to life than talent and that making memories with people is more important. Her words comforted him, though his obsession with having a talent didn't lessen.

Before the Izuru Kamukura project, Hajime finds Chiaki by the water fountain, and she invites him to play a game with her. Hajime refuses and says he has to be somewhere. Chiaki asks him to wait, before saying "I l- Nothing. It was nothing." Before leaving, Hajime tells Chiaki that she's more than just an Ultimate Gamer, and tells her to make many memories at Hope's Peak. While walking away from Chiaki, Hajime thinks to himself how one of the reasons he decided to participate in the project was because of his desire to show Chiaki he has a talent. He thought of her while he was being transformed into Izuru Kamukura, and decides to become a version of himself that he can be proud of around Chiaki.

Upon his transformation, Hajime forgot all his memories with Chiaki. As a result, Izuru could not recognize Chiaki, although he confronted her after her execution. After Chiaki dies, Izuru is seen shedding tears despite not knowing who she was, suggesting that a part of Hajime remains in Izuru.

After awakening from the Neo World Program, Hajime, when trying to persuade Ryota Mitarai that hope and despair are both essential, he remembers Chiaki, showing great sadness over her death. While recalling memories of her, Hajime claims that he would never forget her, nor would he want to, and forever thought of her as precious to him.

In the bonus mode of Danganronpa V3, Hajime and Chiaki quickly become friends and often meet up to play games together. She runs late to one such meeting and apologizes, explaining that she had to stay behind as some of her classmates got too rowdy and wrecked it. He says it's no problem, leading to them reminiscing about how well they both get along with their friends. At another point, they're playing Gala Omega when Monokuma pops up to 'supervio clean up her classroomse' them, claiming it to be unwholesome for a boy and a girl to be alone together. While Chiaki doesn't pay him much mind, Hajime expresses annoyance at the bear. In their third year, she extends him an invitation to her class's Christmas party, and he accepts. There, they talk about their plans after graduation, and Chiaki says she hopes they can all keep meeting up like this in the future. Hajime asks her if she's free New Year's Day, and if so whether she'd like to come to his birthday party. She eagerly agrees, and offers to extend the invitation to the rest of her class. He questions whether they'd really want to come, but she says they all like him, so she's sure they will. Chiaki blushes as she says she's looking forward to spending time with him, and he agrees, though he adds it's a bit embarrassing to be making a big deal out of his birthday like this.

The ship sailed as a result of a lot of ship tease between the two in canon. Its main rival ship is Komahina. However, some fans enjoy both, resulting in Komahinanami. On AO3 it is the most written ship for Chiaki and the second most for Hajime. It is also the fourth most written ship in the Super Dangan Ronpa 2 tag. 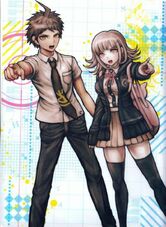 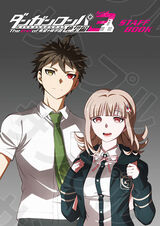 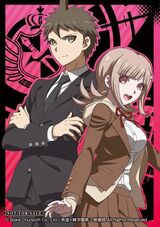 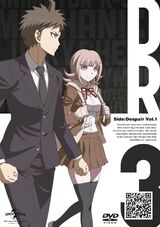 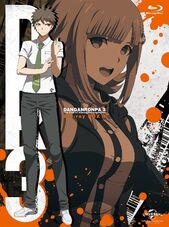 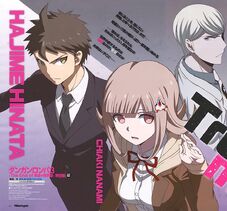 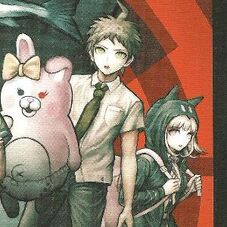 Hinanami is the het ship between Chiaki Nanami and Hajime Hinata from the Danganronpa fandom.

Hajime is shown to be close to the AI version of Chiaki over the course of the story. Hajime and Chiaki are frequently shown to be together in cutscenes and events. Their relationship progresses to a point where they can understand each other's expressions and wishes, even without the other speaking. However, it took him some time to warm up to her, as in Chapter 2, he thought of her behavior as "annoying."

Chiaki prevented Hajime from going to the Final Dead Room when he was stressed out because everyone suspected him to be the traitor, and she also assisted him during trials and investigations. It was briefly indicated before the all-girls beach party in Chapter 2 that he was attracted to Chiaki in her swimsuit. It is especially prevalent in Chapter 4 that the two are considerably close throughout most of the chapter.

During the fifth trial, Hajime was the most devastated among the group of remaining students when he found out that Chiaki was the "traitor" and was executed. It was also Chiaki who begged for Hajime to both claim and prove she was this alleged traitor, trusting his ability to see past the words and lies Monokuma created and into the hope she sees in him.

In Chapter 6, Chiaki was the one who guided Hajime to see the reality that whether or not he had a talent was irrelevant. It was due to her support and encouragement that he was finally able to overcome despair. Before she was shut down along with the program, he thanked her for her help and promised never to forget her.

Throughout her free time events, it is somewhat implied that Hajime and Chiaki's relationship extends beyond the regular friendship Hajime and the others hold to a deep, everlasting friendship. The talks the two have progressed from mere small talk to friendlier and playful yet also serious and consoling (usually from Chiaki to Hajime). There are also romantic connotations, such as both blushing when she trips and he catches her and her complimenting him on being well-built.

When Chiaki mysteriously reappears to Hajime, it is shown that when he refuted everyone's statements in the final Endless Debate, everyone saw a vision of the closest person to them, further showing Chiaki is the closest person to Hajime. Hajime insists on her person-ness, even after discovering her nature as an AI. When Hajime finally gets to tell her "Thank you," which is, in turn, responded in kind, it is implied that both their words carry a deeper meaning.

When the battle of hope and despair ends, and Hajime and the 77th Class get on a ship, Hajime sees an illusion of her talking to him, smiling as it tells him to move towards the future.

The ship sailed as a result of a lot of ship tease between the two. Chiaki having her most important interactions with Hajime and the two working together during the investigations and Class Trials a lot further helped to fuel the ship. 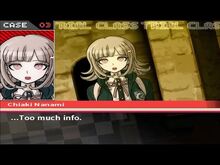 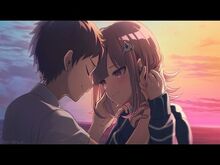 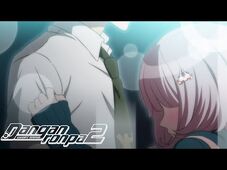 Always With You -Comic Dub- 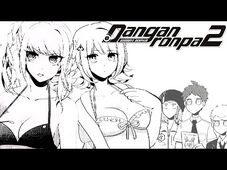