“I see... so I actually... had feelings for you...”
— Nekomaru after being asked if he found 'love' inside Hajime.

Hinidai is the slash ship between Hajime Hinata and Nekomaru Nidai from the Danganronpa fandom.

The two first meet in Chapter One, alongside a majority of the other character introductions. Nekomaru is boisterous, attempting to tell Hajime to speak more loudly and encouraging him to do so as he introduces himself a second time. Hajime takes note of Nekomaru's build, commenting that he may do better playing on a team than managing one.

For a majority of the game, the two don't spend a great deal of time alone. In the second chapter, Hajime is concerned when he finds Nekomaru and Akane Owari fighting one another, only to be assured that they're only training.

During Chapter Four, after Nekomaru was reborn into a robot body after having been punished by Monokuma, he and Hajime explore the Funhouse together. Hajime didn't have much of a say in the matter, being one of the last two left. Nekomaru, however, seems very good-natured about being stuck with Hajime, and the two tour the tower together. Upon Nekomaru's murder in Chapter Four, Hajime vows to himself that when he finds who killed the team manager, he will never, ever forgive them.

During Nekomaru's Free Time Events, their relationship becomes somewhat different, with Nidai taking Hinata under his wing as his new student. Nekomaru becomes a little grabby with Hajime, touching him a few times without permission in order to fully analyze his body's potential for sports, and ultimately deciding he'd make an excellent rugby player. Hajime states that he's pretty sure Nekomaru overestimated him, only to have the coach insist that Hajime had excellent judgement skills, a high degree of mobility, and knowing the importance of teamwork.

Further into the Free Time Events, Nekomaru opens up about his past, and his reasons for becoming a team manager. He notices when Hajime is praising him internally, and says that they are one in both body and mind. While Hajime initially expresses that he's not really sure he wants to be in one body and mind with Nekomaru, he continues to admire him nonetheless. Also, Nekomaru repeatedly offers to do 'it' to Hajime -- 'it' being his renown athlete's massage. The first few times Hajime refuses, to which Nidai respectfully drops the topic. However, once the protagonist concedes, he describes feeling lighter and realizing that he would be unable to live without Nekomaru's massage.

Worthy of note, Nekomaru appears far more insistent that Hajime strip and get naked for his 'it' sessions, and purely in general, than he is for his other trainee, to which he acts more insistently that she remain clothed. At the end of the Free Time Events, Hajime describes that spending time with Nekomaru gave him an optimistic feeling.

Nekomaru's Island Mode drops even more heavy-handed hints towards Nekomaru's attraction towards Hajime. While most characters never refer to the outings as dates, Nekomaru directly calls it a date should Hajime choose a poor result during an outing. The team manager then insists that Hajime can't expect him to fall in love with him if he acts like that, heavily implying that Nidai views the outings as a means to get together, and not just a means to hang out. Should Hajime choose the 'best option,' Nekomaru praises him, and insists that they should hurry back to their room to do a special menu version of 'it' together.

During Nekomaru's ending, Nidai expresses that it was refreshing to meet a talented man like Hajime, to which Hinata expresses that he doesn't have a special talent like everyone else. Nekomaru insists that Hajime is like a bud before it blossoms, and says he'd like to make that flower blossom 'with [his] own hands.' Hinata notes to himself that hearing that makes his spine tingle, though it's unclear whether it's because the comment made him flustered, uncomfortable, or some mix of them both.

Nekomaru tells Hajime he found something deep inside of him during their time together. The correct answer is hope, but should Hajime guess 'love,' Nekomaru realizes that he did indeed have feelings for Hinata, only to have Hajime quickly insist he was 'just kidding.' After saying he was joking, though, Hajime chastises himself, realizing that he doesn't know what he's saying.

If the correct answer, hope, is chosen, Nekomaru realizes that Hinata is correct, and describes him as 'a person he can invest all of [his] passion into.' He then tells Hajime that he'll do 'it' to him anytime, and decides that they should stay together and take on the world at one another's sides.

Hajime says that he feels like Nidai overpowered him, but at the same time, feels like he can do anything when they're together.

“Hmmm... That date wasn't exciting at all... A detailed plan produces maximum results in both dating and training.You won't make me fall for you if you act like this! Bye now!”
— Choosing a bad option in Nekomaru's Island Mode

Hajime (in his mind) – “I'm not much of a sports guy anyway... But more important, he's got a lot of confidence. And...I can understand how proud he must be to be a team manager. Just as I thought...Nekomaru is an amazing guy.”
Nekomaru – “Hm? Did you just praise me in your heart?”
Hajime – “Huh? How'd you know!?”
—Nekomaru seemingly reading Hajime's thoughts.

Nekomaru – “You know just what to say to put me in a good mood! How about I give you a super version of "it" right now?”
Hajime – “N-No thanks...”
— Hajime rejecting a third offer of 'it' from Nekomaru

Nekomaru – “In fact, let's do that first to fire things up! C'mon, get naked and lay down right there!”
Hajime – “H-Hold on... Why do I have to get naked?”
Nekomaru – “Don't worry about it. I just feel like it, that's all.”
—Nekomaru, after Hajime accepts his offer of doing 'it.'

The ship sailed after some fans discovered Nekomaru's implied attraction for Hajime during his Free Time Events, and the close coat-trainee bond that came with it. This was only fueled by their Island Mode events, especially the line Nidai gives about 'having feelings' for Hajime. Nekomaru and Hajime's new agreement, under which Nidai is Hajime's coach and is to train him for the rest of his life, holds a romantic connotation in some fans' eyes, especially the comment about doing 'it' anytime.

This ship is often overshadowed by ships like Akanidai, Hinanami and Komahina, being the more popular ships of the two characters in question. 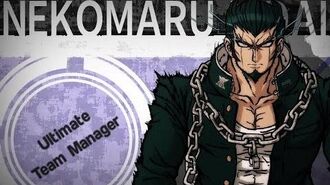 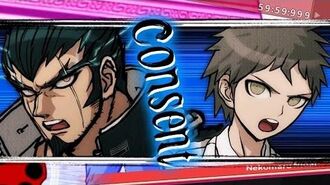 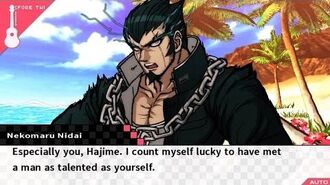 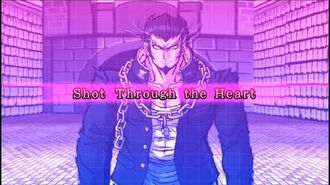 Retrieved from "https://shipping.fandom.com/wiki/Hinidai?oldid=215676"
Community content is available under CC-BY-SA unless otherwise noted.