“She was kissing him as she had never kissed him before, and Harry was kissing her back, and it was blissful oblivion, better than firewhisky; she was the only real thing in the world, Ginny, the feel of her, one hand at her back and one in her long, sweet-smelling hair”
— Harry, in Harry Potter and the Deathly Hallows

Hinny is the het ship between Harry and Ginny from the Harry Potter fandom.

Harry and Ginny first met at King's Cross Station. However, they didn't formally meet until the summer of 1992, at which point it became clear that Ginny had a crush on Harry. Until 1995, she was too shy and nervous to talk to him. She became further embarrassed after Harry saved her from the Chamber of Secrets in his second year. She had been possessed by a diary containing a fragment of Lord Voldemort's soul, known as a Horcrux. Hermione helped Ginny by advising her to be more herself around Harry, and perhaps even see other people. Ginny took this advice, and Harry came to see her as she truly was: strong-willed, witty, stubborn, and compassionate. The two became good friends in Harry's fifth year, and Harry gradually started to enjoy her company. She was also able to cheer him up during his depression and accompanied him to the Department of Mysteries. After his relationship with Cho Chang fell apart, Harry's feelings for Ginny began to deepen and change, helped along by the time he spent with her at The Burrow in the summer. In his first Potions class with Slughorn, the love potion Amortentia revealed he was attracted to "something flowery he had smelled at the Burrow," which later turned out to be Ginny's hair. After witnessing her kissing Dean Thomas, Harry started to feel jealous and fantasies about kissing her himself. One of the many reasons that Harry fell in love with Ginny was that she was rarely weepy, in stark contrast to Cho, who cried all over the place after her previous boyfriend was killed.

Shortly after Ginny and Dean broke up, she and Harry spontaneously kissed at a Gryffindor Quidditch Cup victory party. The two began dating, and Harry regarded this time as one of the happiest in his life. However, after the murder of Albus Dumbledore, Harry decided to end things with Ginny, fearing that Voldemort would target her if he learned of their blossoming romance, and knowing that he would be leaving with Ron and Hermione to find Voldemort's Horcruxes. Ginny was upset, but respected Harry's decision, knowing that it was for "some stupid, noble reason."

The two soon saw each other again during the summer while Harry stayed at the Burrow. For Harry's seventeenth birthday, Ginny passionately kissed him as something for him to remember her by, but they were "accidentally" interrupted by Ron and Hermione. Ron told Harry not to "mess around," as his sister had been "pretty cut up" when Harry ended their romantic relationship, though Hermione was more sympathetic towards the two of them. The two were soon separated for months as Harry tracked down Horcruxes with Hermione and Ron, while Ginny returned to Hogwarts, but still harbored pretty strong romantic feelings for one another. After Ron abandoned his friends, Harry took to staring at Ginny's dot on the Marauder's Map, and was worried when he heard that she, Neville, and Luna had gotten in trouble attempting to steal Godric Gryffindor's sword for him.

When the Battle of Hogwarts began, Harry wanted Ginny to stay out of the fighting but was forced to ask her to leave the safety of the Room of Requirement while he, Hermione, and Ron searched it for Rowena Ravenclaw's diadem. Later in the battle, after Ginny was nearly killed by Bellatrix Lestrange, Harry ran toward Bellatrix rather than Voldemort, though Mrs Weasley got there first.

After Voldemort's defeat, Harry and Ginny resumed their strong romance. Sometime between 1999 and 2002, they got married, and had three children: the first son James Sirius, the second son Albus Severus, and the third and only daughter Lily Luna.

Hinny is a popular ship in the Harry Potter fandom, with plenty of fanart made of it. On AO3, it is the most written ship for Ginny and the third most written for Harry. 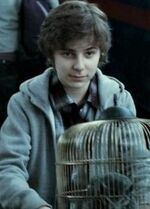 James Sirius Potter (born between September 1, 2003 and August 31, 2004) was the first son of Harry Potter and Ginny Weasley, he has a younger brother named Albus Severus, and a younger sister named Lily Luna. His maternal uncles were Ron Weasley and Hermione Granger. James was named after his paternal grandfather, James Potter, and his father's godfather, Sirius Black.

James took after his maternal uncle, Ron Weasley, in his poor timing and knack for interfering with other people's love lives. He also seemed to have inherited his sense of humor and love for mischief from his two maternal uncles, Fred and George, and had a fondness for teasing his little siblings and making mischief. He was also very like his two namesakes, James Potter and Sirius Black, in his mischievous and trouble-making nature. 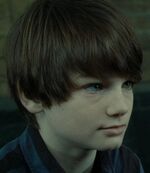 Albus Severus "Al" Potter (born between September 1, 2005 and August 31, 2006) was a half-blood wizard and the second son of Harry Potter and Ginny Weasley, he has a older brother named James Severus, and a younger sister named Lily Luna. Albus was the middle child of the three Potter siblings, born two years after his older brother James, and two years before his younger sister Lily. He was named in memory of Albus Dumbledore and Severus Snape.

Albus was a quiet, kind and thoughtful boy, unlike his loud brother. He seemed to have inherited some of his father's personality, including his irrational and childish fear of being sorted into Slytherin house. He seemed to be interested in his father's fame and past, as it seemed that he inherited the paternal line of curiosity. 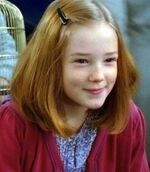 Lily Luna Potter (born between September 1, 2007 and August 31, 2008) was the third and only daughter of Harry Potter and Ginny Weasley, she has two older brothers, James Sirius and Albus Severus. She was named in memory of her paternal grandmother, Lily Evans, and her parents' best friend, Luna Lovegood.

Lily seemed to have a personality similar to her mother's. She was very jealous of her two older brothers when they left for Hogwarts, quite similar to the eagerness and envy Ginny displayed when the last of her brothers went away to school in 1991. She seemed to enjoy talking to her family. She and her cousin Hugo, had an "animated discussion" about what house they would be in, suggesting they were very close cousins.

Retrieved from "https://shipping.fandom.com/wiki/Hinny?oldid=155819"
Community content is available under CC-BY-SA unless otherwise noted.