Hironey is the het ship between Honey Lemon and Hiro Hamada from the Big Hero 6 fandom.

Hiro first met Honey Lemon at San Fransokyo Institute of Technology, where she showed Hiro the creating and results that one of her alchemic formulas presents and is impressed by it. On the days leading to the showcase, Honey Lemon and a few of her collage friends, Wasabi, Fred and Go Go spend time with Hiro and helped him to bring his inventions to it on the day. Where she tells Hiro that he'll do great to help him get through any worries he may have about stating on stage and presenting his microbots, but not before taking a group selfie with her phone to mark the occasion. While Hiro was able to get in SFIT, Tadashi was later killed in a fire Wasabi tries to help Hiro through his grief, with the support of Honey Lemon, Fred and Go Go, but ended up being pushed away by him until they followed Hiro to the docks and encountered Yokai.

After Hiro, Baymax, and Tadashi's four SFIT friends set themselves the goal of stopping and brining Yokai to justice by becoming a superhero team, Hiro and Honey Lemon spent some time together creating a few more alchemic formulas that could help them do so. Along with Hiro creating Honey Lemon a chem-pure, so she could create them on the go; and her pink and purple colored superhero armored suit that goes with it.

When San Fransokyo Museum of Art is hosting an art party, where one of the piece is City Raising. Lenore Shimamoto's maker piece, the two, along with Baymax and Fred, stand guard across the building to insure that it doesn't get burgled. Being an non-art lover, Hiro became board quickly, Honey Lemon, who is an art lover, is enjoying herself. She explains that City Raising represents the city's rebirth after the great catastrophe of 1906, and up till now it was lost for hundreds of years. The next day, after the team kept Globby from stealing the painting, Hiro realizes that he has a project that he was supposed to work on over the week and because the red paint on it was still wet and got covered by it when he failed to present his project, Honey Lemon had mistaken it for blood and became worried that her young friend might had hurt himself; until he reassures her that he is fine. After seeing Karmi's humiliating video of Hiro failing on the web, Honey Lemon and the rest of their friends tell him not to worry about failing again, despite Hiro assuring them that he is fine before presenting his ideas to them. One of them is similar to Honey Lemon's quick drying foam idea from when she did the very same project. In the end Hiro is able to cover come his "failure mode" and is finally able to pass, and like the rest of their friends Honey Lemon is happy for him.

In "Mr. Sparkles Loses His Sparkle", Honey Lemon helps Hiro with the first testing of their new suit delivery system and when it didn't go as planned, she tells Hiro that it is just a fluke and that he shouldn't give up. Because she was holding Mochi at the time when the team stared to clapped for Hiro's success, she didn't clap with them, but the small on her face says that she is proud of him.

While Honey Lemon acts as a big, caring sister figure towards Hiro, there have been those who have the two as lovers. Despite the large age difference gap between them, prefect the idea of her being shipped with Wasabi, Fred or Tadashi. The fact that Hiro's original Marvel counterpart had a crush on Honey Lemon's, even though Hiro Takachiho and Aiko Miyazaki (who's code name is Honey Lemon) were never really involved in a romantic relationship in the original comic series, it helps the ship gain a few supporters who wish to focus on their Marvel selves rather than their Disney ones, but there have been though who do merge them and their two different universes together in order to make it the same ship and fandom.

On AO3, the ship has over 16 pieces of written work and a decent fanbase on Tumblr and FanFiction.Net. 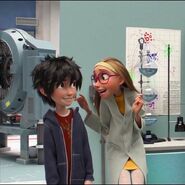