Hiyobuki is the femslash ship between Hiyoko Saionji and Ibuki Mioda from the Danganronpa fandom.

Both Hiyoko and Ibuki are shown to be good friends, despite the fact that Hiyoko often insults her (like she does with pretty much everyone else), this doesn't appear to bother Ibuki. Even prior to the tragedy, during the events of Chapter 2, it was revealed that both Hiyoko and Ibuki, along with Mahiru Koizumi, Mikan Tsumiki and Sato were best friends when they attended Hope's Peak Academy. In the next chapter, during a special event, Hiyoko and Ibuki hold a memorial for Mahiru at the music venue. They ask Hajime Hinata to take pictures of them performing together, as Mahiru said before she died that she wanted to take pictures of Hiyoko dancing and Ibuki playing the guitar. They are accompanied on stage by Chiaki Nanami, who plays the triangle.

Hiyoko and Ibuki were both murdered together by Mikan. But despite this, they remained close friends after awakening from their comatose state.

In Ultimate Talent Development Plan, Ibuki gives Hiyoko a CD of her latest music piece as a gift. When Hiyoko asks Ibuki why she decided to give her the CD, Ibuki answers that she thought she would have the most fun listening to her song. This causes Hiyoko to blush, and she accepts the gift. Hiyoko then compliments Ibuki by saying that even though she isn't good at anything else, she is pretty amazing at music, which makes Ibuki happy. Ibuki then attempts to hype up Hiyoko by cheering, but Hiyoko tells her to shut up and that she's just loud and annoying when she does that outside of a concert.

During Danganronpa S: Ultimate Summer Camp, the two spend time together on the beach. Hiyoko shows excitement at Ibuki's acapella performance of one of her songs, but the two are interrupted by Kotoko Utsugi, who expresses disdain at Ibuki's music, much to Hiyoko's displeasure. Instead, Hiyoko convinces Ibuki that they should all sing the Caged Child seance song together. In Ibuki's "My Future" event, Ibuki reveals the songs that she had written for her classmates, and Hiyoko defends her from criticism. In another event with Usami, Ibuki reveals that Hiyoko's is the song she is most excited to write.

The ship seemed to have mainly sailed due to the canon friendship between both characters, along with the fact that Ibuki is one of the only people who Hiyoko is shown to respect, as Hiyoko is the seen to be the only person who really enjoyed Ibuki's music.

Hiyobuki isn't popular in the fandom, and is considered as a rarepair. The ship is greatly overshadowed by more popular shipping choices for both characters such as Band Aid and Soapies, two of the most popular femslash in Danganronpa 2. 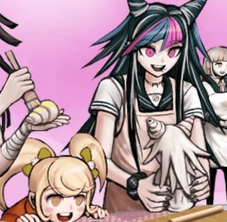 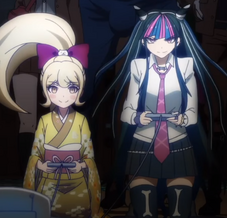 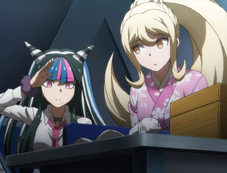 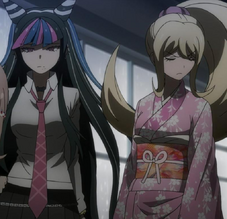 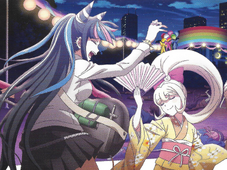 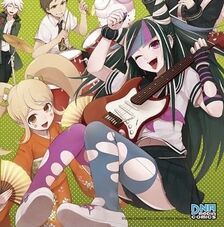 Twilight Syndrome Girls refers to the ship between the two, Mahiru Koizumi, Mikan Tsumiki, and Sato