HomuMado is the femslash ship between Homura Akemi and Madoka Kaname from the Puella Magi Madoka Magica fandom.

When Homura was shyer and less hardened by the world, Madoka was the first person to approach her and accept her. Madoka helped Homura feel stronger, as before Homura had been worried that she was weak and useless. They became best friends and Homura evidently developed strong feelings towards Madoka. Eventually Madoka died in the fight against Walpurgisnacht and Homura made a contract with Kyubey to become a Magical Girl and gained the power to turn back time. She reset her time at school countless times trying to save Madoka, but Madoka would always either die or become a Witch herself. These constant failures caused Homura to become the cold and distant girl she was at the beginning of the series.

The Only Thing I Have Left to Guide Me

Homura had a famous confession scene where it alluded to her having feelings for Madoka and having a difficult time processing how to deal with a relationship where she knew more about their history together than Madoka did.

Madoka became a Magical Girl and ascended to godhood as a result of Homura's time travel connecting her with the suffering of all the previous timelines. She sacrificed herself using her powers to rewrite the universe, making it so Magical Girls would no longer turn into Witches once they exhausted their Soul Gems, but instead ascended into a paradise she made. Madoka held an intimate conversation with Homura at this point, telling her that she is now aware of all the timelines and everything Homura had gone though just to save her and also of her true feelings. She bid her farewell, telling her they will be friends forever, and that they will only be apart for 'a bit'. After that, Madoka gave Homura her red ribbon, all while both of them are naked and floating in astral space.

Madoka attempted to ascend Homura into her Valhalla once her Soul Gem is fully corrupted, but was taken by surprise by the pocket dimesion Kyubey put had put Homura in. Madoka was then trapped inside Homura's semi-Witch barrier, losing her powers and memories. Halfway through the movie, the two of them shared an intimate moment on a flower field, during which Madoka strongly implied

to have feelings for Homura as well. At some point, Homura started to realize how lonely it was for Madoka in Heaven, unable unable to meet her parents and loved ones. In the end, Homura stole Madoka's powers and became a demon, made possible due to her Soul Gem being corrupted not by despair but by "Love". Homura rewrote the universe once more, ripping away Madoka's memories in God hood, giving her a happier life. In the final scene, Homura vaguely asked an amnesiac Madoka if she believed that breaking the rules for a sudden surge of emotions was wrong. After hearing the answer, Homura told her they would one day become enemies. After that she gave Madoka back her ribbon and said it looked much better on Madoka.

Some fans suggest the red ribbons Madoka gives to Homura at the end of episode 12 may also represent the red string of fate, as "two people connected by the red thread are destined lovers, regardless of time, place or circumstances."

The anime itself is one of the most popular non-canon yuri shows among Japanese otaku, to the extent that HomuMado and the show itself regularly take first place in the list of the most popular yuri shows and other yuri TOPs, regularly bypassing the more respected and open yuri works. Such an attitude towards the franchise ultimately led to the fact that after Madoka the term "yuri" began to be interpreted more broadly in Japan and to mean not only lesbian romantic relationships, but also any important and intense emotional relationships between female characters.

It should be noted that some of the HomuMado moments in the Rebellion are the intentional nod for this ship, because according to Shimbo, they wanted to thank devoted fans by fanservice and at the same time without interfering with the very concept of the plot written by Gen. 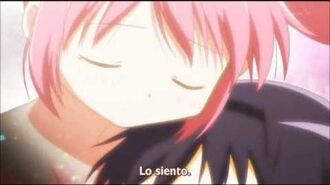 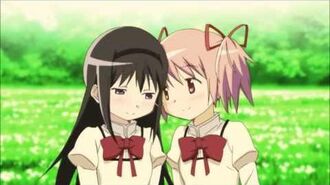 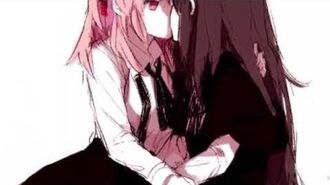 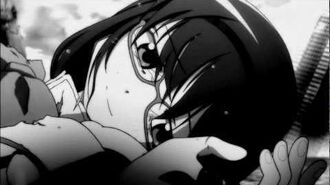 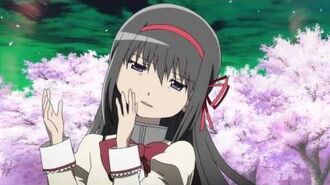 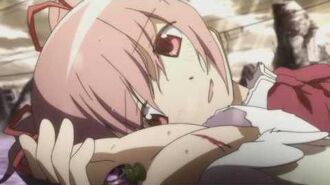 Retrieved from "https://shipping.fandom.com/wiki/HomuMado?oldid=218004"
Community content is available under CC-BY-SA unless otherwise noted.