Partners/Allies
Confirmed feelings on Hope's side

• A Shared Suffering - By the end of the trilogy, the pair have been l'cie, displaced by time, and remade into God's pawns.
• Affectionate Nickname - Hope calls Lightning "Light". He is also the only person allowed to call her this.
• Battle Couple - Not only do they fight together, their fighting styles complement each other as a long-range support (Hope) and an up-close damage dealer (Lightning).
• Couple Theme Naming - "Hope" and "Light" share a virtue theme. This continues to Lightning's true name, which also translates to "light".
• Defrosting Ice Queen - Hope is the main reason that Lightning breaks down her walls and becomes a warmer person.
• Devoted To You - By XIII-2, Hope is completely devoted to Lightning.
• I Have Your Wife - Bhunivelze uses Hope's soul as a bargaining chip to keep Lightning in line.
• Implied Love Interest - In the trilogy, it's never directly stated Hope is in love with Lightning, though this is confirmed in one of the novels.
• Love Hurts - Hope was tortured for 169 years because of his love for Lightning.
• Maybe Ever After - LR ends with Lightning deboarding a train, looking for Hope.
• Ship Tease
• Strong Girl, Smart Guy - Lightning: a no-nonsense, military trained soldier and Hope: an academic researcher and leader of the world.
• Sword and Sorcerer - Lightning's the melee fighter while Hope is a glass canon red mage.


MOMENTS
• Act Of True Love - Hope gives up a life with his parents to rescue Lightning from being trapped in the Chaos.
• Declaration of Protection - A mutual one between the two that extends a millennium.
• Futile Hand Reach - During Hope's goodbye, the two reach their hands out to each other, only for Lightning's hand to pass through Hope due to his spirit being only semi-corporeal.
• I Want My Beloved To Be Happy - Lightning attempts to sacrifice herself in part to allow Hope a new life with his parents.
• Please Don't Leave Me - After regaining her emotions, Lightning quotes this trope directly. Hope answers her plea.
• Talking In Your Dreams - During his dreaming while traveling to the future, Lightning talks to Hope about his accomplishments and the future.
• Try Not To Die - Hope asks Lightning several times to try and stay alive.
• You Are Not Alone - At the end of one quest, when Lightning says that she feels like the whole world is against her, Hope tells her he has her back.

HopuRai is the het ship between Hope Estheim and Lightning Farron from the Final Fantasy fandom.

When they initially team up, Lightning sees Hope as a burden and makes several attempts to shoo him away. When her Eidolon appears and attempts to kill him, Lightning blocks the blow with her saber and promises to “toughen him up”.

After they reach the Gapra Whitewood, both Hope and Lightning reveal things about their pasts and realize they are very similar in pasts and motivations. Lightning lends Hope her survival knife, a gift from Serah on her birthday, as both a means of completing "Operation Nora" and a promise. They create a partnership and Lightning allows Hope to take point throughout most of the chapter.

They continue on to Palumpolum, briefly being separated due to Lightning wanting Hope to talk to Snow, before being reunited where Hope revokes his plan to kill Snow after a failed attempt. Lightning is relieved and the two make a mutual vow of protection. Afterward, the l’cie(minus Vanille and Sazh) meet up at Hope’s home.

While Lightning is left in Valhalla for the entirety of the game, she is mentioned in almost every conversation with Hope. In 10AF Hope shows Serah and Noel an Oracle Drive with Lightning as its focus. In 4XXAF Hope says that while he was asleep in the time capsule, Lightning visited his consciousness and told him he was on the right path. Before the final fight, Hope attempts to join with Sarah and Noel in hopes of rescuing Lightning to which he is told to worry about the others.

Hope and Lightning reunite 13 days before the end of the world, both remade into servants for the god Bhunivelze. While talking, both of them discover they are missing their emotions. Hope explains Lightning's role as the savior and his as her guardian, watching over her from the Ark. The Ark serves as a home base for the pair, where Lightning must return every day.

On the final day, Hope visits Lightning in her mind as his true self. After a lengthy talk, Hope confesses that he was glad to have met Lightning and trusts she’ll make the right decision for the new world. During the boss fight against Bhunivelze, he will make lewd comments towards her. Since Bhunivelze is a god and cannot create feelings of his own, these feelings come from the portion of Hope’s soul that he combined with his own.

After the fight, Lightning uses her survival knife and Hope’s ultimate ability, Last Resort, to free the remaining part of his soul. Lightning then offers him a new life with his parents, something Hope has wanted since the day his mother died, yet when she pleads for help, Hope is the one to save Lightning and guide her to the new world, giving up the life with his parents. When the group of eight reunite, everyone journeys to the new world with a partner; Lightning and Hope go together with an encouraging shove from Snow.

A reporter on the new world, Aoede, is gathering stories of people that remember their old lives and Hope, still being an influential member of society, is her first story. In the new world, Hope has returned to his 27-year-old body and is continuing his work as a researcher. Hope retells his memories beginning from the Thirteen Days before FFXIII and how Lightning had been a key figure in making him who he was. He briefly talks about how she had protected him during that time and how he wanted to return the favor but ultimately couldn’t since Lightning had been taken to Valhalla. Hope mentions that everyone except him and Serah, Lightning’s sister, believed she was in the pillar supporting Cocoon with Fang and Vanille. Ultimately, Hope grew up determined to bring back Lightning, along with Fang and Vanille, to the world of the living. Hope is about to mention Lightning’s role as the savior, but backs off and tells Aoede that she should hear the story from the savior herself.

Later Aoede returns for a second interview with Hope, having had no luck in finding Lightning. Hope then presents her with new information dubbed “The Chaotic Era”, which correlates with the aftermath of FFXIII-2. While the rest of humanity moved back down to the remains of Pulse, Hope and a small team of researchers stayed on Bhunivelze, the planet they had created. Ultimately, the research team disappeared, and upon investigating the disappearances, Hope became depressed and began hallucinating a “rose-haired phantom” that he identified as Lightning. This led to him reliving past dreams until he could no longer tell illusion from reality, and he reveals that the phantom had been a ploy from Bhunivelze, the god of light, to lead him to the Ark. Led by the phantom, Hope disappeared, leaving behind a message to “beware the fake Lightning”, although the phantom wasn’t used on anyone else. Hope meanwhile, spent 169 years being tortured and remade into God’s servant, leaving him emotionless and regressed into his 14-year-old body.

Aoede, having no new leads, gives up on finding Lightning. Several months later, Aeode spots her getting off of a train and asks for an interview. Lightning, however, denies as she doesn’t have time to fully divulge in her time as savior. Aeode decides against following her, and wishes her luck, particularly in finding Hope, as Lightning finally has a life that is hers to live - without the gods interfering.

“You and I are partners, Hope.”
— Lightning, FFXIII Chapter 5

“Even if the world hates you, I’ll always be by your side, Light.”
— Hope, LR: FFXIII

“As long as you were with me Light, I didn’t have to fear anything. I’m not scared, not even now, because you’re here.”
— Hope’s goodbye to Lightning, LR: FFXIII

“The moment I realized this(Lightning was suffering), I knew that I didn’t want to only be protected by her. I wanted to protect her too.”
— Hope, Reminiscence: Tracer of Memories

“May this woman, who was once a brilliant beacon of light in “that other world”, chance upon Hope - this was my wish, and it was like a prayer, a promise.”
— Aoede, Reminiscence: Tracer of Memories

To the New World 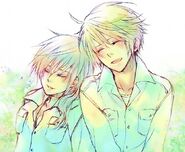