Hot Wings is the slash ship between Toya "Dabi" Todoroki and Keigo Takami from the My Hero Academia fandom.

Keigo- better known by his hero name, Hawks, is the current second ranked hero in Japan and was given a mission by the government to infiltrate a villain group, the League of Villains (LoV). Dabi is Hawks's main and possibly only contact he has to the group since he was the only one he could get close to, basically Hawks is a double agent.

The two originally set up an attack on a pro hero using a Nomu but Dabi goes back on his word and they nearly come to blows when they confront one another after Endeavor's fight with High-End. Dabi is unfazed by Hawks' anger and brushes him off, promising at the end that he would contact Hawks again. In chapter 231, Dabi gives Hawks the order (although not revealed till a later chapter) to kill Best Jeanist as proof that he truly wants to join the LoV.

After the fierce battle against the Liberation Army, Dabi contacts Hawks again and invites him to join the League after seeing that Hawks had indeed carried out his order. As he's walking towards the stage where the rest of the League is, Hawks internal dialogue proves that his loyalties are still with the heroes. Dabi's suspicions of the #2 hero seems to be absent as he leads Hawks through the crowd, even commenting how the hero looks "quite happy."

Dabi saves his friend, Twice, from Hawks through a surprise attack that leaves the left side of Hawks' face burned. With a foot on Hawks' face, Dabi taunts the hero and reveals that he never trusted Hawks to begin with, before unleashing a massive wave of fire directly onto the hero. When Hawks saves Twice despite the action hurting him even more, he questions Dabi why he put his friend at risk. To which Dabi responds that he knew that Hawks would save Twice, because of the winged hero's "hero-instincts/training." Mid-way through their clash, Dabi shouts Hawks' real name, Keigo Takami, as a warning. Surprising the hero and causing him to wonder who Dabi truly was. When the winged hero was doing his spying he had managed to uncover most of the true names of the League's many villains, but Dabi's was one of the two names he wasn't able to find. Even though Fumikage Tokoyami was able to save and get Hawks away from Dabi, who tries to prevent the two from escaping his flames, the villain had already gravely burned the hero's back.

In Dabi's hero damaging broadcast that reveals his true identity as Toya Todoroki, Toya also reveals Hawks' damaging secret of his father being a thief and serial killer, who was caught by his father, Endeavor. Along with Dabi stating the fact that Hawks had killed Twice (as Dabi shows the recording he edited of the said deed to make Hawks look worse to the public) and Best Jeanist, who is later revealed to be alive shortly after Dabi exposes Hawks' crime and secret past. After Toya escaped with his villain allies, Hawks was forced to hide his face from the public when Best Jeanist takes the injured hero to his old house. Even though Keigo's mother was no where to be seen, the letter she left her son did inform him that Dabi had learned his true identity and backstory from her. Even though Keigo wasn't sure about Toya's clam on the Todoroki household being true or not, he is sure that he and Toya aren't the same and the best way to settle things is to go back to the beginning; before he goes to see Endeavor.

A popular theory that has been in the MHA fandom for awhile is that Dabi is actually Toya Todoroki, who is Endeavor's eldest son that was mysteriously absent throughout the entire series. As of chapter 290 in the manga, this has been officially confirmed to be true. This creates an interesting relationship between Dabi and Hawks as Endeavor is right above Hawk's head in the hero ranking system.

Hawks also appears to hate people like Dabi (criminals/villains), fan works will depict or write where Hawks realizes how Dabi came to be the person he is: through heroes. If heroes exist then villains are bound to exist as well so that the two have someone to fight/balance it out, which cues the AU with villain!Hawks.

Following the release of chapter 266, fans speculated a possible past connection between Keigo and Dabi. Some fan theories - many of which can be found on Twitter and/or Tumblr - include childhood friends, family relations (Todoroki family friends with Hawks'), or a senpai-kouhai relationship. These are all under the assumption/theory that Dabi is Touya Todoroki. Because Touya's Quirk was said to be more powerful than his father's, fans suspect that Touya might had been placed in the very same special hero training program that Keigo was recruited into as a child, and due to Keigo seeing Endeavor as his idol, he might've befriended Touya during their time together. The shock look in Hawks's eyes during Chapter 267 indicates that the theory of the two knowing each other, before Dabi became the scared flamed villain, may hold some merit, since Dabi does reveal himself to be Toya Todoroki and his hero damaging broadcast reveals that he knows about Hawks' father being a thief and a killer who was caught by Endeavor. Chapter 299, however, disproves the theory of the two being childhood friends when it revealed how Dabi truly uncovered Keigo's identity and origins.

Some fans have also joked that Dabi was going to turn Hawks into "roast chicken" soon; which ends up happening in the Paranormal Liberation War Arc, where Dabi gets interrupted when he was in the middle of "cooking" Hawks. Because fire is Hawks's weakness when it comes to his wings, fans fear that Dabi burning Hawks's back might had burned away his wings and how it could possibly lead to the end of Hawks' hero career, due to Fumikage Tokoyami noticing how the hero's back is gravely injured.

Anti-hero Dabi is semi-popular in the fandom, in this world, Dabi is a murderer yet also a savior. He comes to care for Hawks after working with him, which causes him to shield/protect Hawks from the League of Villains.

Under the theory that Dabi is Toya Todoroki, Hawks's admiration and idolization of Endeavor is shattered after finding out about what he did to his family (the severity varies between fan works) and sympathizes with Dabi. While what happens after is usually up to the writer/artist. The current most popular Hot Wings fan fiction: Second Lap Around the Block by teaandtumblr is the inverse of many fanfics, where Dabi becomes good.

They are shipped for their aesthetic, ship name, and/or potential in fanfics.

Many AU's have Hawks as the "savior" and Dabi is the one being saved. Hero/Villain trope.

It is the most popular ship for both Dabi and Hawks, their rival ships are Huwumi, EndHawks, MiruHawks and DabiTwice. 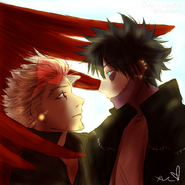 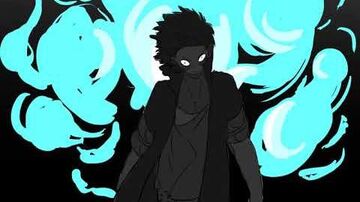