HuXiao is the het ship between Xiao and Hu Tao from the Genshin Impact fandom.

There isn't much content that contains the two as they have not interacted in the canon timeline yet.

In their voice lines, Hu Tao seems to be the only human that Xiao actually finds 'humorous', and Xiao is also one of the very few people who has a positive impression of her. This is quite surprising since Xiao is an introvert who keeps himself away from others and has a stoic, serious personality. On the other hand, Hu Tao's voice line about Xiao sounds like she is flustered and is trying to keep a secret about him. Similarly, her voice line is surprising because Hu Tao is not shy—she doesn’t hold back her opinion on any other character she has voice lines about.

In Chapter I, Act I: Of the Land Amidst Monoliths, there is a ghost named Dusky Ming who Xiao is taking care of at Wangshu Inn. He described her as a spirit who had never hurt anyone, yet is also not yet able to be moved on. The ghost can be seen singing 'Hilitune', a song which Hu Tao composed. Moreover, this ghost was also featured on Hu Tao's birthday post, playing hide-and-seek with her.

Both the yakshas and Wangsheng Funeral Parlor play a role in keeping Liyue safe from the resentful remnants of evil gods. Xiao’s story quest and voice lines mention that the yakshas keep the resentment from spreading by slaughtering the demons that spawned from remnants. Hu Tao’s story quest and the Staff of Homa description mention that doctors and directors at Wangsheng Funeral Parlor have historically helped purify the resentment that plagued the people of Liyue.

“Hu Tao? Her liveliness is irritating. Fortunately, she is also humorous, so you need not worry about her growing into a boring human.”
— Xiao about Hu Tao

“What would I know of the adepti? Ai-yai-yai, that kind of stuff is top-secret! Don't come asking me about it!”
— Hu Tao about Xiao

“Do you know the history of the Yaksha? They once fought against the ancient gods. They fought brilliantly in a battle that engulfed the whole world in darkness. Although the gods were defeated in the end, their resentment persevered.”
— Hu Tao in her story quest "Yet the Butterfly Flutters Away": "In Pursuit of a Phantom"

The ship was born when their voice lines about each other were revealed. HuXiao shippers often think that Xiao would be protective towards Hu Tao and Hu Tao might be the one to help Xiao find peace/happiness.

Many HuXiao shippers like the ship due to their fun dynamic, angst potential, and many thematic similarities. A key point is their shared associations with butterflies and death. Hu Tao and Xiao are like two faces of the same coin. They both deal in death, but Hu Tao is about moving on, seeing death as a peaceful conclusion of life that everyone must experience. In contrast, Xiao is about death as a redemption, where life is so full of suffering that death is a release. For Hu Tao, death is a path of life thus the butterfly (soul) flutters away (moves forward). For Xiao, death is a dream (desire).

Those who don't ship HuXiao romantically enjoy their dynamic as friends or as a found family (usually with Zhongli as the father figure and sometimes Ganyu/Qiqi as sisters). Their similarities in gameplay (being hypercarries who require HP management) has also led to fanworks depicting the two of them together.

HuXiao is often overshadowed by some ships like XiaoVen and Xiaother on Xiao's side or YanTao on Hu Tao's side, although it remains one of Hu Tao's more popular ships. On AO3, there are currently 200+ fanfics about Xiao and Hu Tao. 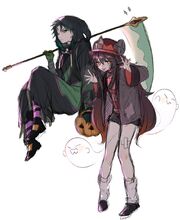 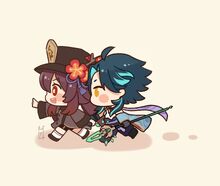 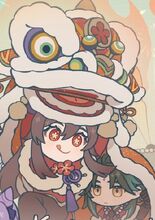 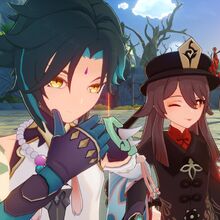 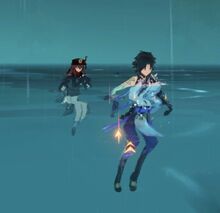 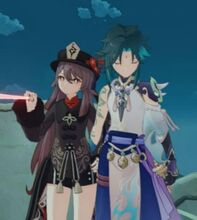 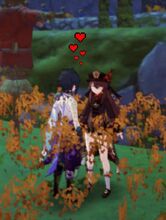 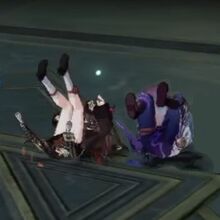 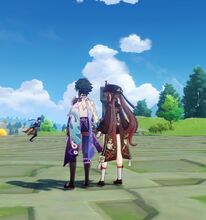 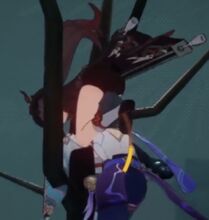 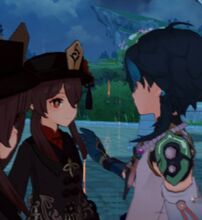