Hualian is the slash ship between Hua Cheng and Xie Lian from the Heaven Official's Blessing fandom.

Hua Cheng and Xie Lian originate from the novel Tian Guan Ci Fu or Heaven Official's Blessing by Mo Xiang Tong Xiu (MXTX). They can also be recognized from various adaptations of the novel, such as the manhua, and the donghua adaptation. There’s also a live action drama in the making.

The beginning of the novel takes place during Xie Lian's third ascension into godhood. At this time, he isn't very well respected by his fellow gods, and constantly ends up ignored or berated for the smallest of things. After causing destruction to heaven during his ascension, Xie Lian is sent on a mission in order to earn merits to pay for the damages. On this mission, he would be escorted to his destination by Hua Cheng, although he does not find out who he is until the mission is over. Xie Lian is cautious of his guide, but does note that he is respectful, above all else.

When he brings up this occurrence in front of The Heavenly Court, they scramble to warn him of Hua Cheng and recount his less-than-pretty history with heaven. Xie Lian doesn't pay much mind to their warnings, going as far as calling his Deathly Spirit Butterflies cute and saying his name suits him. He would meet Hua Cheng again, albeit in disguise, on an ox cart heading to his current place of residence, Puji Shrine. The two quickly warm up to each other, and after an incident involving a ghost parade, Xie Lian invites Hua Cheng to stay with him in Puji Shrine.

Hua Cheng, of course, agrees, and the two quickly fall into a homely routine. Which is cut short due to Nan Feng and Fu Yao, the apprentices of Xie Lian's former generals, all but barging in and trying to convince Xie Lian his new house guest is out to get him. After much scuffle, the quartet manage to reach a point where they can set off together on a mission to BanYue pass. They encounter many problems along the way, such as a sandstorm, scorpion snakes, cannibalistic garden corpses, and eventually Sinners' Pit. Part of the journey was stalled due to Xie Lian getting stung by a scorpion snake and the imminent side-quest in search of a cure, Hua Cheng sucked the poison from his hand, but there was still need for medicinal care in the shape of an elusive plant. In the end, they do end up at BanYue pass.

They encounter KeMo, who threatens to throw down part of their party into Sinners' Pit. At this, Hua Cheng willingly jumps down much to Xie Lian's dismay. Xie Lian would then jump down after him, but he ends up taking KeMo as well. Hua Cheng catches Xie Lian, and Xie Lian would discover he seemed to have altered his voice and appearance, but it was too dark for him to notice anything else. KeMo and Hua Cheng battle due to Hua Cheng massacring the inhabitants of Sinners' Pit, all the while, Xie Lian is still cradled in his arms. After meeting BanYue herself and leaving Sinners' Pit, Hua Cheng and Xie Lian would settle in for the night. Xie Lian questions what he'd like to eat, but addresses him by his name, exposing that he knows Hua Cheng is the one behind the disguise. Hua Cheng cheekily parrots Xie Lian's royal title, and the two engage in a lively back-and-forth conversation, exchanging questions about each other's worlds and so forth. Xie Lian asks about Hua Cheng's true appearance, causing the other to wither slightly, but after much lamenting, Hua Cheng promises the next time they meet, he will greet him with his true appearance.

This comes soon, as Xie Lian is apart of the mission of infiltrating Ghost City, which so happens to be governed by Hua Cheng himself.

Having been published in 2017, the following for the novel began to rise in early 2018. With the growth of popularity in Mo Xiang Tong Xiu's other novel, Mo Dao Zu Shi, in turn, Tian Guan Ci Fu also began gaining more popularity. As of now, there is a considerably large fandom, which will inevitably grow further as more adaptations are announced and released.

It is no doubted the most popular ship in the fandom, along with Fengqing

Compared to WangXian ship from the MO DAO ZU SHI fandom, this ship might have more moments. 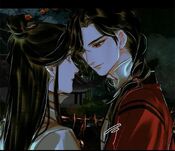