Shipping Wiki
Register
Don't have an account?
Sign In
Advertisement
in: Ships, Ships/Het, The Owl House/Ships,
and 5 more

Huntlow is the het ship between Hunter and Willow Park from the The Owl House fandom.

Any Sport in a Storm

In order to prove his worth to the Abomination Coven head Darius, Hunter looks for more Emperor's Coven recruits at Hexside. Willow, meanwhile, is recruiting for people to join her Flyer Derby team. Hunter accidentally bumps into Viney's pet griffin, Puddles, causing him to evade him by flying on his staff. Willow witnesses and is impressed by Hunter's flying skills, and pulls him down with vines. Willow asks him if he wants to join her Flyer Derby team, and introduces herself with an enthusiastic handshake. Hunter introduces himself as Caleb and makes up a fake backstory, before saying he has his own mission to do. Willow asks him to at least take a pamphlet, and he obliges. After seeing the pamphlet saying "best and brightest," Hunter immediately turns around asking if her club will really attract the best witches. Willow replies absolutely, so Hunter agrees to give it a try.

Hunter displays his flying skills as a way to attract more members to Willow's team. Willow comments that he's great, and that with him, she can get the Flyer Derby team approved. Meanwhile, Hunter comments to himself that Willow would be a great member for the Emperor's Coven, and that with more witches like her, they're set. When Willow introduces Hunter to the rest of the team, he is put off by their seeming laziness or lack of skill, and walks away. Willow follows him, asking for him to give them a chance, and Hunter replies that where he's from, chances need to be earned, especially for someone considered "half-a-witch" like him. Willow is slightly shocked by this response, though as Hunter walks away, she pulls him into the ground to transport him to the playing field. There, Hunter encounters the team members showing their dedication and skill at the sport, defying his first impression of them. Willow states that they've all been misjudged before, and asks Hunter if he still thinks they're pathetic. Hunter shakes his head, and at that, they proceed to prepare for the game. After winning the game, the professor asks for their team name to register them as a club. Willow realizes she hasn't thought of one yet, and Hunter suggest the "Emerald Entrails" because they're wearing green and there's more to them than people think. The other members enthusiastically agree, and Willow takes a group selfie.

Hunter then reveals his identity as the Golden Guard. Willow hesitantly asks if he's the one Luz has talked about, and he confirms. Multiple coven members appear to collect the recruits, and they end up in a jail cell for punching one of the guards. Hunter is unable to understand why the team members don't want to be part of the Emperor's Coven and why they feel betrayed. He asks Willow if she's on his side, but she doesn't reply and instead blames herself for getting her team in trouble, calling herself "half-a-witch" Willow. Right then, they are taken by Darius. Hunter has a conversation with Steve where Steve reminds him of the gruelling training they had to go through as new recruits to the coven, plus having to give up their palismen. Hunter starts to regret forcing them into this and chases after Darius's ship on his staff.

Hunter's appearance on the ship surprises Darius, giving the team an opportunity to crash the ship and escape. Darius angrily approaches the members with a scythe hand, going through Willow's defences. Right as he is about to attack them, Hunter steps in front of them to shield them. He says that they are insolent agitators who are unfit to be part of the Emperor's Coven, and also removes cloak saying that he's not fit for the role of Golden Guard either. He turns around, pleading Willow to leave. With slight tears in her eyes, Willow tells her team that they should go and that they need find a replacement, light-heartedly commenting that it'll be 52 weeks before Caleb's next day off, making Hunter blush and smile at her. Willow and her team are later seen looking at her scroll, as they discover that Hunter has made his own Penstagram account; since Darius gave him a scroll in the previous scene so he can stay in contact with the young witches he befriended. Hunter's slow typing gets Willow and Gus to laugh at it.

After the events of "Hollow Mind" had Hunter leave the Emperor's Coven when he learned the dark truth of his Emperor and the past Golden Guards before him, it is revealed that Hunter has been hiding in the abandoned theatre at Hexside. After fighting with two members of the Emperor's Coven who wanted to take Hunter back to Emperor Belos, Hunter has a panic attack. This leads to Gus showing Hunter a breathing trick that Willow showed him back when they first met. Later, once he and Gus reach the end of the illusion, they are greeted by a fake Willow, though Hunter is able to see through the illusion and they escape. However, once they round the corner, Hunter and Gus are greeted by a fake Belos, which tricks them so they can get captured by the Emperor's Coven. Hunter is then put to sleep. When he wakes, he is greeted by the Flyer Derby team, who saved him from the Emperor's grasp. Still, Principal Bump is suspicious of Hunter. Then Hunter reveals that Gus showed him the "breathing thing" that Willow immediately recognized, which leads her to defend Hunter. Hunter then helps Willow, and the teachers and students of Hexside to fight the coven scouts so they can save Gus, once Willow helped Hunter create an opening to reach their shared friend. Hunter used Willow's breathing technique to help him calm Gus down, even though he can only whistle. Afterwards as Willow hugs Gus from being relieved that he was okay, she then pulls Hunter into the group hug, that causes Hunter to blush. After the defeated Emperor's Coven left the school, Hunter tells Willow and the others the dark truths of Belos and the coming danger of the Day of Unity.

Clouds on the Horizon

When Willow learns that Hunter was tasked to look after Luz, both she and Gus convince Hunter to take them with him. After they met up with Luz it was revealed that Hunter doesn't want Willow, or Gus, to know that he is actually a Grimwalker. Fearing that the truth could cost him his friends. Around the time that Hunter, Willow, Gus, Amity and Luz were trapped by Odalia, Luz secretly gets Gus to create an illusion that would have her and Hunter switch places, in order to keep Kikimora from taking Hunter back to Emperor Belos. Willow was unaware of this when they escaped and began to attack both Odalia and Kikimora. When Kikimora charged towards them, Hunter (disguised as Luz) quickly dashed towards Willow to get her out of danger, while Luz (disguised as Hunter) was grabbed by Kikimora. Thinking that Luz was actually Hunter, Willow goes after them in order to save "Hunter", only to have Kikimora use "Hunter" as a human shield to prevent Willow from attacking her. After defeating Odalia and knowing that Kikimora still has their friend, Willow was the first to dash onto the air ship so she can go after them. She was surprised to learn that Hunter wasn't captured at all and that he was disguised as Luz this whole time. A tired Gus explains that Luz came up with the plan in order to keep Hunter safe.

Any Sport in a Storm

Clouds on the Horizon

“Uh... Caleb? Uhhh... Caleb! Uh, Jasper Bloodwilliams. I just transferred from... uh... The Toes?”
— Hunter trying to introduce himself to Willow and Gus

“That's not the captain. Have you ever seen her play Flyer Derby? There's no way she'd be afraid of me.”
— Hunter recognizing Willow's abilities

“Come on stupid thing we have to follow them!!”
— Willow trying to start the airship to save “Hunter”

Before the episode "Any Sport in a Storm", Huntlow was somewhat of a rarepair and crackship due to the characters never interacting and the fact that the two would likely be enemies. The ship gained more popularity with Season 2B promos showing Hunter tied up by Willow's vines, implying the two would meet. It was also fuelled more with the episode synopsis of "Any Sport in a Storm" revealing that the episode would be focused on them. When the episode aired, more people were convinced on shipping Huntlow since the two became friends and Willow helped progress Hunter's character development. Hunter also reveals that he was considered "half-a-witch", a nickname Willow was bullied with in the past.

Huntlow is considered problematic by some due to their 2 year age gap, with Willow being 14 and Hunter being 16. They believe that their differences in maturity could create an unhealthy power dynamic. However, people argue that due to Hunter being more sheltered, Willow is the one with more emotional maturity, meaning that their relationship would have no power unbalance.

After "Hollow Mind" had Hunter running out of the Owl House in a panic, a few fanfic and comic writers that are Huntlow fans have him being found by Willow, had ran straight to her house for help or used his scroll to contact her and the rest of their teammates and friends for help. As they see Willow as one of the people who can help Hunter with what he saw and learned in Belos's mind. Huntlow had also inspired a few Owl House fans to draw their Palismen, Flapjack and Clover as friends or simply spending time with one another. As there are theories that the Flapjack photo Hunter send Luz by accident in "Reaching Out" was meant for Willow. The ship has also been featured a few times in role swap AUs that commonly have a human version of Hunter as Luz, Willow is sometimes seen serving as Hunter's Amity. 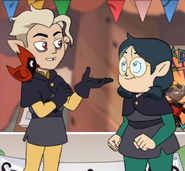 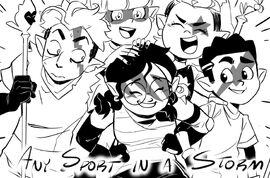 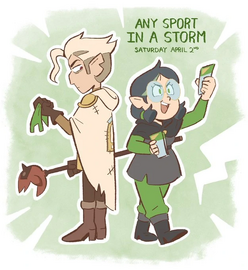