• Birds of a Feather - Hawks tells Tokoyami that he didn't have the biggest interest to nurture the new generation heroes and yet, he still taught him. While Fuyumi on the other hand, is a teacher taking care of children.
• Dating What Daddy Hates - Endeavor hates Hawks.
• One Head Taller

Huwumi is the het ship between Keigo Takami and Fuyumi Todoroki from the My Hero Academia fandom.

While Hawks and Fuyumi have yet to interact directly, Hawks continues to be a supporter of the Todoroki family which is what Fuyumi cares about the most, her family. The two properly met each other when Endeavor was in the hospital recovering from the reveal of Dabi, a villain from the league, exposing himself as his son Tōya, who the entire family presumed was dead. Seeing an injured Keigo come into the doorway, Rei bows as an apology on behalf of her son. Keigo hastily reassures her, saying that there was no need to apologize and that was not what he had come here to do. Fuyumi leans down to help her mother up and Hawks smiles at them before beginning to speak about the problems they were currently facing. Later, Hawks shows his support for Endeavor and the family, and eventually follows Fuyumi out of the room.

A popular trope amongst the Huwumi fandom is Hawks and Endeavor having a comedic in-law relationship with each other. If Fuyumi and Hawks are not together yet however, the trope features Hawks asking Endeavor if he can date Fuyumi, to which Endeavor gets furious over. In fan fiction, Fuyumi and Hawks meet when he's working with Shouto as his intern or helping Endeavor out. When they meet, Hawks tries to flirt with Fuyumi only to be dragged away by Enji. A lot of Huwumi tropes involve Fuyumi and Hawks living together, or Hawks occasionally taking a break from his hero duties to visit Fuyumi at the school she works at. There have also been occasions when Huwumi fanworks have the two meeting as kids or during their teens through Fuyumi's father or oldest brother, due to Endeavor and Dabi being the two Todoroki's who are commonly featured beside Hawks and know him in canon; before the manga finally has Fuyumi meeting Hawks in person. The same could be said for Cold Wings, as it too involves Hawks being shipped with a member of the Todoroki family.

Huwumi shippers also like to think that Hawks is the only one who can understand why Fuyumi wants to fix her relationship with her father despite what he has done. Since Hawks sees that Enji is trying to atone for his actions, he would understand why Fuyumi wants to fix their family because they finally have a chance to be at peace. Huwumi writers include this headcanon into their stories by making Hawks encourage Fuyumi to arrange dinners with her family while supporting her in any way he can.

Huwumi shippers like to ship Hawks and Fuyumi together because of the potential dynamic between the characters. Since Fuyumi is overwhelmed by her family and is constantly working, many fans like to think that with Hawks carefree and laid-back personality they would be a cute match together. Since Keigo himself is burdened by his own responsibilities and family, fans think that Keigo can understand Fuyumi’s worries and stress very well. This dynamic is very popular in Huwumi fan fiction. Hawks takes Fuyumi flying and the two eventually confide in each other about their struggles, which makes them closer in the process. This also involves AU’s like Fuyumi finding out about Hawks’ double-agent job.

Currently on Pixiv, Hawks and Fuyumi have 37 artworks and 27 novels. 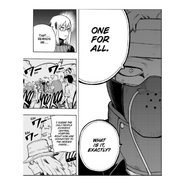 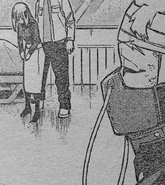 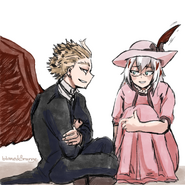 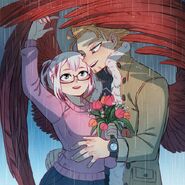 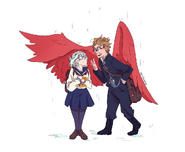 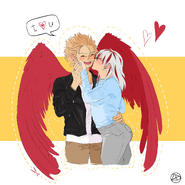