Iceberg is the het ship between Neptune Vasilias and Weiss Schnee from the RWBY fandom.

Weiss and Neptune first meet in Volume 2 Chapter 2 when Sun Wukong introduces Neptune to Team RWBY and Team JNPR. After Neptune introduces himself, Weiss immediately takes an interest in him and asks him where he's from. Neptune flirtatiously responds to her question, calling Weiss "Snow Angel". Despite rejecting Jaune Arc when he used that same nickname, Weiss immediately responds to Neptune, introducing herself to him much to Jaune's chagrin.

Weiss and Neptune meet again in Chapter 3 when Sun and Neptune ask Team RWBY to help them with their investigation. Ruby Rose then assigns Neptune to assist Yang Xiao Long with her task. Weiss instead suggests that instead Ruby and Yang should be partners and that Neptune should accompany her to the CCT tower, most likely in an attempt to get closer to him. Ruby then scoffs and drags her away much to Weiss's dismay.

They next interact in Chapter 6 when Sun and Neptune enter the Ballroom while Weiss and Yang are fighting, Yang wants the upcoming dance to have a fog machine, but does not want it to have doilies, while Weiss decided that if she doesn't get to have doiles then Yang can't have her fog machine. Upon entering, Neptune seems to overhear the fog machine idea and seems happy about the prospect which causes Weiss to almost immediately change her mind, likely in an attempt to impress him. Weiss then shows interest in what Neptune is wearing to the dance, but he doesn't get a chance to respond as Sun does so first. Later in the episode we see Weiss asking Neptune to the upcoming dance, but do not hear his response.

Later, at the dance in Chapter 7 while Ruby is talking to Jaune, she mentions that Weiss is attending the dance alone because Neptune rejected her offer. Jaune then notices that Weiss is noticably disheartened by attending the dance alone and he speaks to Neptune on the balcony to inquire about his rejection of Weiss. At first, Neptune seems confused by Jaune's anger, but he soon admits that he turned her down because he can't dance and he didn't want to appear uncool in front of her. Jaune then asks Neptune whether he likes Weiss and Neptune responds with "Yeah, I mean, I don't know her too well yet, but she seems pretty cool". Jaune encourages Neptune to go talk to Weiss and to just be himself in front of her and Neptune agrees to do so. Neptune can later be seen nervously approaching Weiss and she offers him a seat next to her. Weiss asks Neptune what made him change his mind and he admits that it was Jaune who encouraged him. After this Weiss gets noticeably happier.

Much later in Volume 3 Chapter 2, Weiss wishes Neptune good luck for Team SSSN's fight against Team NDGO, but she quickly gets upset when she notices him flirting with the members of Team NDGO causing her to ask them to break Neptune's stupid face.

Lastly in Chapter 11, Neptune shows concern for Weiss when he calls out to her after she is struck by the new and improved Atlesian Paladin-290.

This ship is not as popular as a lot of Weiss's other ships and is even less popular than the ship between Sun and Neptune, Sea Monkeys. This is mainly due to Neptune being viewed as not as developed for Weiss. However, this ship had a fairly large amount of popularity during Volume 2 when Weiss and Neptune interacted the most. Despite losing popularity with every year some people are hopeful that it will resurface because of the growing possibility of Neptune's return to the show as a major character.

On AO3, the ship has 145 fanfics. Iceberg also has a decent sized fanbase on Tumblr and Deviantart. 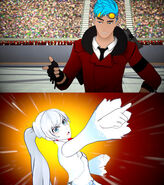 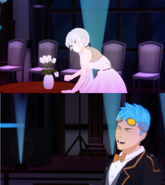