IiTsuyu is the het ship between Tenya Iida and Tsuyu Asui from the My Hero Academia fandom.

Tsuyu and Tenya are both in the canon Dekusquad friend group. They seem to be on friendly terms, yet social interaction between the two is not often seen. Even thought they are not exactly shown on screen communicating, communication is implied and they seem to be good friends and know each other well. They even refer to each other using friendly honorifics, "Kun" or "chan", although Tenya often prefers to be more proper.

While Tsuyu is crying in Season 3 episode 13/51, Tenya, along with Ejiro Kirishima and Momo Yaoyorozu, seem to be incredibly upset that she is crying. He goes over to her and comforts her, and he almost seems to be restricting himself from getting closer to her, however. For the concert they help their classmates prepare for the U.A. School Festival, both Tsu and Iida serve as two of the dancers.

During the Season 4 OVA, when the two see each other after Iida is injured, Tsuyu jokingly but caringly tells him to call her Tsu (as she had throughout the episode) Iida then gets flustered and calls her "Tsu-chan-kun". He continues to call her Tsu-chan-kun throughout the manga. While during the Season 3 ending, "Update", Tsuyu is seen directly staring at him while he was sleeping on a bus.

The ship, still an extreme rare pair, is often used as an alternative to other ships, such as TokoTsuyu, MidoTsu, and TsuChako. Yet, with the immense popularity of those ships, this does not seem to have that much attention. However, the ship has been recently gaining a small increase in fans. The most prominent use, however is in the poly ship, IiTsuChako, yet that ship seems to be more revolving around TsuChako and IidaOcha.

A common idea within shippers is that Iida does not realize his crush on Tsuyu until she makes the first move, after having liked him for a while. This is a common theme as far as romance goes. Normally, this ship is shown as an extremely healthy and lovey-dovey relationship. Shippers often point out that the two have complimenting personalities, even comparing the two at times. Not to mention, soft and caring with seemingly cold and tight are a very popular stereotype portrayed in many different ways with this ship being no exception.

On AO3, the ship only has 30 het fanfics and 21 gen fics, while Fanfiction.net only has 7. IiTsuyu also has a small fanbase on Tumblr. 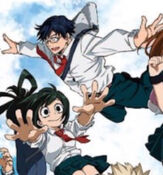