IidaBaku is the slash ship between Tenya Iida and Katsuki Bakugou from the My Hero Academia fandom.

When he walks into the 1-A classroom, Izuku mutters that he hopes that Katsuki and "that scary guy from the exams" (Tenya) weren't placed in the same class as him. Unfortunately (for Izuku), both not only were in his class, but were arguing at the time of his arrival: Katsuki had set his feet atop his desk, and Tenya scolded him, as he was disrespecting the school by scuffing its property. Katsuki scoffs at this and smirks before taunting, "You're kidding me, right? Your old school shove a stick up your ass?"

Katsuki and Tenya are partnered (as the "villain" team) against Izuku and Ochako ("hero" team) for the Battle Trials. To Tenya’s disdain, Katsuki immediately abandons him and the "bomb" they were supposed to be guarding so he can go off and fight Izuku, not for the trial, but for the sake of his own personal grudge, as Momo later states. After he reaches Izuku (and Ochako), Katsuki detonated several large explosions which literally shake the training building, and draw Tenya’s attention. Tenya then shouts at him (through his earpiece) to question what he's doing, and receives the reply that Katsuki is angry before Katsuki hangs up. The battle ends with the win of Izuku and Ochako, as Ochako dashed during Katsuki and Izuku's battle, and got her hands on the bomb. Momo later gives an overview of the trial, and compares Katsuki’s behavior with Tenya’s; Katsuki did the absolute worst, in terms of behavior, while Tenya did the absolute best.

After the first announcement of the Sports Festival, a crowd of students come to gather outside of the 1-A homeroom to block the class from leaving. When Minoru questions their presence, Katsuki simply snides, “Scouting out the enemy, small fry." Tenya begins to chide him after this, but to no avail. He later denies Hitoshi's question if the entirety of 1-A were 'asses' like Katsuki.

The days following Katsuki's kidnapping by the LoV, the class heads to visit their injured classmates at the hospital. Eijiro begins to intensely express his distress over the loss of Katsuki, and not being able to fight for him, then suggests that he and the rest of 1-A save Katsuki themselves. Tenya is very angered by this, and dubs such a plan irrefutably, stupid. However, that night, after the group of Eijiro, Izuku, Momo and Shoto attempt to sneak away, Tenya joins the rescue mission, albeit reluctantly. He aids to the later rescue of Katsuki from Kamino Ward by using his Recipro as an extra boost to launch him and the others into the air. By joining this mission for Katsuki, Tenya risked not only being expelled from U.A, but dishonoring the name of his (hero) family, so it is a very notable thing to consider.

IidaBaku, while largely overshadowed by either character’s more popular ships (such as KiriBaku, BakuDeku and IidaMei) has notably large traction with MHA/BNHA fans thanks to the clash between Tenya and Katsuki’s personalities, more specifically the “good boy/bad boy” trope aspect of it.

Fans commonly joke about the “duality” between the two; Katsuki acts, and even dresses like a typical delinquent, but seems to never have broken a rule in his life, even going to bed, as fans joke, at 8:32 (p.m). Tenya gives the appearance that he could truly do no wrong, when he in reality is the one to have done something so bad as attempting to literally kill a man (Stain). 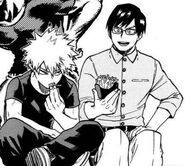 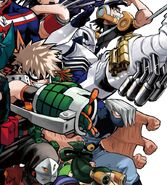