IidaMei is the het ship between Tenya Ida and Mei Hatsume from the My Hero Academia fandom.

Mei and Tenya do not interact all too often due to Mei’s lack of screen-time. However, they share a plentiful number of moments during the Sports Festival, and a few later on in the series.

The two meet during the Sports Festival Arc while they are competing with each other in the Calvary battle; they are on different teams with Tenya on Shoto's team and Mei on Izuku's team. During the Calvary Battle, a few teams competed with each other for Izuku's 10 million point headband.

After the Calvalry Battle, Mei has an idea of her own. She comes up to Tenya and gives him one of her gadgets, which she refers to them as her 'babies'. Mei lets Tenya have one of her support items called the Auto Balancers. The two face off in the Battle Tournament, and Ida wears Mei's gadget for his match against her since he respects her battle spirit. However, things soon start going awry. After the Auto Balancer gets hard for Tenya to control, she uses another one of 'babies' called the Hover Soles. Shortly after landing, she uses a capture item called the Capture Gun and catches Tenya in a net. She continues showing off more of her 'babies' to potential support companies, and avoids fighting Tenya. After she finishes showing off all of her 'babies', for ten minutes she purposefully walks out of bounds, making Tenya the winner. Ida gets really mad about that and tells her that she made him look like a fool. He couldn't believe that she would advantage of his noble nature. She coyly says, "I'm sorry, I used you." She chuckles. He screams that he hates her, while karate chopping the air.

The two would later meet again for costume upgrades for their Ultimate Moves. Mei forgets Izuku, Ochaco, and Tenya's names and dismisses them. Tenya remarks that he is the guy that she used as a 'walking advertisement' during the School Festival. Mei says she never heard of him, and quickly turns around. At the Development Studio while requesting for upgrades, Mei doesn't stop to hesitate to use her inventions on them without their permission. After Mei uses a robotic suit that nearly twists Izuku, Tenya tries to sneakily tell Power Loader if he could improve the cooling devices in his legs. Mei overhears that, sneaks up behind him, and puts rocket boosters on his arms. Ignoring his heated protests that there was nothing wrong with his boosters on his legs, she activates the Arm Boosters, rocketing Tenya to the celling. Afterwards, when Tenya is back on the ground, he tells her that his quirk was in his legs, and calls her a 'mad woman'. Mei says she already knows that about him, but she has a new idea: If Ida wants to cool his legs, he should run with his arms. He screams, "What in the world are you saying?!"

Power Loader apologizes on her behalf, and says she is self-centered to a fault. Iia replies, "Yes, I know that very well."

Later on, Izuku gets the idea to start kicking for his Ultimate Move after his arms become unstable due to an injury from a villain. Mei tells Izuku if he's going to use his legs, he could be more of a speed type than a power type hero. She later points at Tenya and said that he's like an armored tank with an F-1 engine.

The two would not interact for a very long time, but after bringing Izuku back to U.A after the Tartarus Escapees Arc the two would interact with each other again. Tenya and Izuku went to the Development Studio to fix their hero costumes, When Izuku was caught in a familiar explosion which Tenya remarks the "deju vu" when spotting Mei emerging from the smoke, and landing directly on top of Izuku. Later she would show them the new Development Studios, Tenya and Izuku tried to request Mei to see if she could fix their costumes but she couldn't and she would have to remake their gadgets and costumes from scratch. She gave them some gadgets and it ended up punching them in the face.

It is one of the most popular ships for both Ida and Mei. It's a known ship in the fandom because of their similarities and also their moments in the Sports Festival, which helped the ship fueling the ship even more. It can rival IidaOcha and IzuMei. 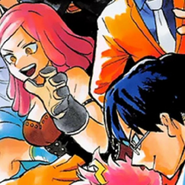